The Crusader’s Tomb by AJ Cronin 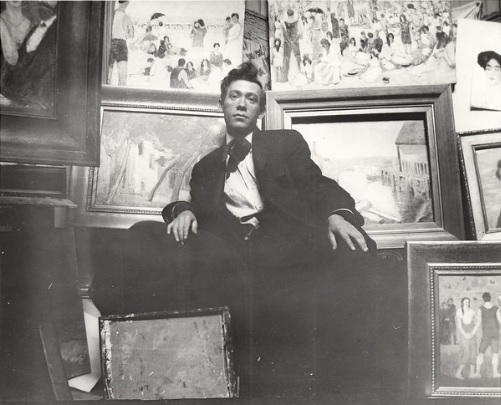 I read this book because Lissa Evans told me that someone should: 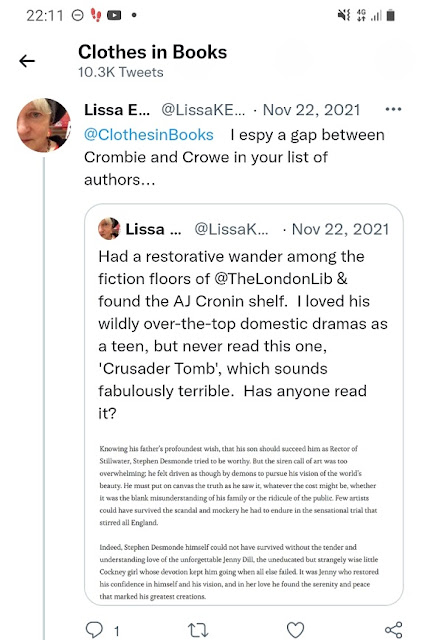 ‘fabulously terrible’ - what a great phrase.

I consider myself to be an expert in the field of literary tosh – I wonder if many people have read as many early 20th century bestsellers as I have. See this post here for more on this topic.

And so I feel qualified to say: this book is indeed fabulously terrible, and it is tosh and not even first-class tosh. And yet…

It is the story of a young man – dates initially not clear, but we’re going to guess the book opens in the early days of the 20th century. His father wants him to go into the church, like his forefathers, and take over the lovely house, church and living where they have been since time immemorial. But Stephen Desmonde wants to be an artist. The book takes in his whole life and career.

It is, on the plus side, very readable and rather unpredictable – you never know what is going to happen, and you do quite want to know.

There are many artists in fiction, and the key is always to make the reader want to see their pictures, and this is where I think Cronin falls down. Agatha Christie does better (Five Little Pigs and the sculptures in The Hollow). WJ Locke’s Beloved Vagabond, W Somerset Maugham’s Moon and Sixpence, Harriet Evans’ recent book The Garden of Lost and Found. The wonderful Fake Like Me by Barbara Bourland.

But then – I never had any desire to see the paintings of Troy Alleyn in Ngaio Marsh’s crime novels. In Brideshead Revisited there is no verdict on Charles Ryder’s work (as he is the 1st person narrator that’s not surprising), but according to Evelyn Waugh’s letters, he was a very bad artist. He wrote to Nancy Mitford: “[Charles Ryder] was a bad painter. Well he was as bad as painting as Osbert [Lancaster or Sitwell?] is at writing; for Christ’s sake don’t repeat the comparison to anyone.” (!) So much for Ryder’s Latin America, which people were queuing up to order in the book.

There is a long plot strand where he is commissioned to do some pictures as a war memorial, and the descriptions sounded very like the memorial chapel that Stanley Spencer did at the Sandham Memorial Chapel in Hampshire. (I have used a picture of one of the panels for two different Armistice Day posts.) The panels ARE very beautiful, and well worth a visit. 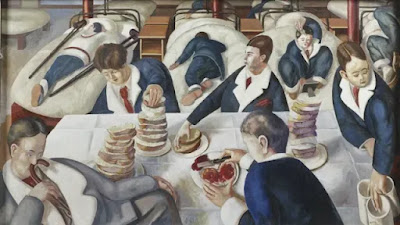 Cronin seems to have crammed in every cliché possible about an artist. There are two unexpected things: Stephen refuses to fight in the First World War, and doesn’t mind being supported by women. We know more about his thoughts than you might think possible (it’s not a short book, and he dominates every page) while still remaining a cipher and just not very interesting.

His left-behind family circle is fairly awful – all very Charlotte Mew/FM Mayor as in featured-this-week The Rectors Daughter: when the book starts you think it will be about the miserable daughter Caroline. There is an entertaining but very distant mother off to the side. (What would Margery Sharp have done with these characters? Wonderful things!)

A cockney friend is about as unreal a character as you might hope to find in male writing of the 20th century, although portrayed sympathetically – this is from the blurb that entranced Lissa so much:

Few artists could have survived the scandal and mockery he had to endure in the sensational trial that stirred all England. Indeed, Stephen Desmonde himself could not have survived without the tender and understanding love of the unforgettable […], the uneducated but strangely wise little Cockney girl whose devotion kept him going when all else failed.

An Amazon reviewer called Brian says ‘Good story but not what was expected. This is not a story about a crusader. It is in fact about a starving artist in France.’

It is only after you’ve finished it that you stop to think – why IS it called that? There is a crusader’s memorial: it is an ancestor of protagonist Stephen Desmonde, and sits in the church where his father is rector/vicar.

the Sieur d’Esmonde, who had gone to the Crusades, lay beneath his marble effigy, the beaked nose broken, alas, by some vandal tourist, in the little Downland church.

But it plays no part in the story, except someone is buried near it at the end, and – get this, Kindle haters – the word tomb does not appear anywhere in the book.

****Added later - there's an interesting suggestion about the title in the comments, and I have added some details in the subsequent post on tombs in books.

Incidentally, the actual status of the Desmonde family is very hard to parse – the idea of the hereditary parish and the beautiful Georgian house to go with it doesn’t seem to actually resemble any reality in English life of the past 500 years, there isn’t room for that kind of a thing. (Up to a Bishop or a Lord, or down to George Eliot clerical poverty, but not stasis). There’s a vague ‘marrying an heiress’ a generation or so back, but that makes it less convincing if anything.

The book was also known as A Thing of Beauty, which isn’t much more relevant, but is exactly the kind of title you would expect a mid-century book of this kind to have.

AJ Cronin was a massive bestseller in his day. (Lord Peter Wimsey’s mother is reading, and disliking, one of his books in Busman’s Honeymoon.) He’d been writing for years when this one came out, which makes it more surprising that it seems, if anything, amateurish and un-accomplished. But you can’t dismiss him: online you can find this claim:

‘Not only were the author's pioneering ideas instrumental in creating the NHS, but according to the historian Raphael Samuel, the popularity of Cronin's novels played a major role in the Labour Party's landslide victory in 1945.’

Which if true would make you forgive him anything.

The Smithsonian Institute has a wonderful collection of b/w photos of artists of the 20th century, which they generously make available under a creative commons licence. I have often used them on the blog – they never challenge any stereotypes of how artists appear, or dress, or where or how they would stand to have their picture taken… (see The Belting Inheritance for a recent example). In case that sounds critical – it’s not meant to be, I love the pictures.

The one at the top shows Abraham Walkowitz (1880-1965) who would for a time have been working contemporaneously with Stephen Desmonde.