The Rector’s Daughter by FM Mayor

Charlotte Mew and her Friends – biography by Penelope Fitzgerald 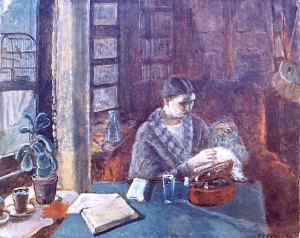 When I was writing about the FM Mayor’s The Rector’s Daughter, earlier this week, I had more thoughts, enough to justify a second post…

Amongst its peculiarities: It was published in 1924, but it is not at all clear when it was set – there is one vague mention of the war, which (from the way you would guess it is placed) should have been a major incident, and one character is described as growing up before the war. But I think Mayor just didn’t bother to factor a timeline into the book, and I found that hard to cope with.

There’s quite a lot of interesting clothes references in the book, though depressingly of course Mary always looks terrible. Her friend gives an excuse as to why Mary is badly-dressed:

‘Your aunt [who raised Mary] was so busy wasn’t she, with her reading and her beautiful needlework?’

Never had woman been lazier than Aunt Lottie, sitting on a sofa even in early middle age, putting occasional stitches into cushion-covers. Mary left her friend to her kind impression.

Everyone, including Mary, has appalling manners and they are all rude to each on a regular and blatant basis. (Whether or not this is realistic, the fact that it is shown like this suggests that the exquisite time of chivalry with which modern attitudes are so often unfavourably compared – well perhaps it didn’t really exist?) Everyone feels free to talk quite openly about others’ personalities, looks and likelihood of getting on in life. 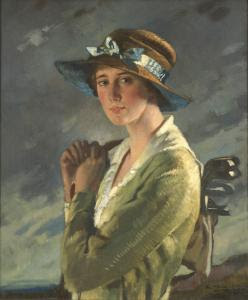 Characters disappear for long periods, so it’s not clear what their importance or role is. (I challenge anyone who has read the book to say who Isabel is). They write appalling busybody letters to people to try to destroy others’ lives for no purpose except spite. This is not seen as particularly surprising or out of the way, and as it turns out is easily forgiven. Honestly, the olden days...

One of the notable achievements of FM Mayor is to try to be fair-minded about Kathy, the woman who does win the heart of Mr Herbert (Mary’s great love). She succeeds in this a lot better than, say, Daphne du Maurier would have - and you can only imagine  how Charlotte Bronte would describe such a rival.

The awful Canon is very well realized, even though we see him almost entirely through Mary’s eyes. He is not the kind of rector who ‘plays soccer with the lads at the boys’ club’. Her friend explains that her mother - another old person - ‘"like your father….she does love to know all we’re doing…" There seemed no resemblance to Canon Jocelyn here.’

‘Canon Jocelyn’s circle really enjoyed dullness: dull talks, walks, books newspapers, sermons, visits, and parties.’ A young woman rather surprisingly says to him ‘We mustn’t let ourselves be groovy, Canon Jocelyn’ – though it would seem she means ‘you mustn’t stay in the same groove and repel new things.’

Mary likes to read Charlotte M Yonge (right for her, and a phenomenon I look at it in two blogposts) and (almost unbearably) reads Trollope and ‘tries not to wish her father’ were more like him.

Another of the oddnesses of the book sent me off in another direction: There is an early line in the book:

Her sister went away and did not return, she was not told why…

And then: ‘Everything went wrong about Will and father’

Most writers would get a whole book out of these hints, or at least a good solid third act surprise event – I mean the mind boggles doesn’t it? But as far as I am aware there is no further mention or explanation of the sister and the brother is a mere cameo.

Now this reminded me of the poems of Charlotte Mew. There is one in particular – The Quiet House, 1916

Since Ted and Janey and then Mother died

And Tom crossed Father and was sent away.

After the lawsuit he could not hold up his head,

Poor Father, and he does not care

For people here, or to go anywhere.

No year has been like this that has just gone by;

It may be that what Father says is true

If things are so it does not matter why

You can read the poem in full here: Poem: The Quiet House by Charlotte Mew (poetrynook.com)

And (the real life poet) Charlotte Mew was another one, she had an intensely depressing life. Penelope Fitzgerald wrote a biography of Mew, and my reading of it is wholly memorable for a strange reason. I was ploughing through this miserylit, not really enjoying it, wondering what else could happen to this woman, and then I realized – and it was a great moment - that the final third of the book was taken up with Mew’s poems, and the biography was almost finished. It was like getting an extra day’s holiday, or finding out you didn’t have to do an exam. I felt almost fond of them (both Fitzgerald & Mew) as a result. Her poems are very good, but none of it – works or life- is joyous.

Top picture: The Library at Beauvairie by Frederick Carl Frieseke, from the Athenaeum website,