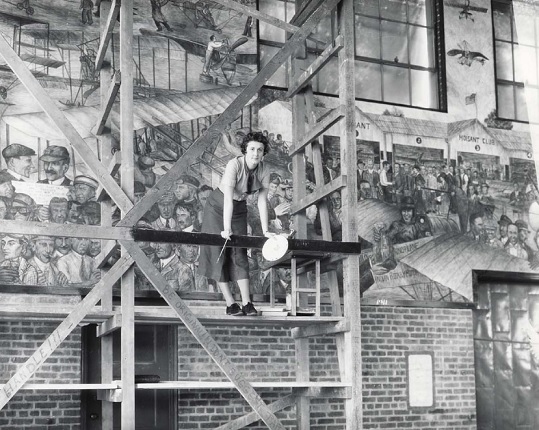 I turned to be confronted with what seemed at first glance to be a thin young man. Only the first of these adjectives proved accurate, for in fact I faced a woman, wearing paint-stained trousers, who was of the same age as those I counted old, like Stephen and Miles. I had been deceived by the loose smock that concealed the breasts, by the trousers, and by the bronze curls that topped an eager, open face innocent of powder and lipstick. 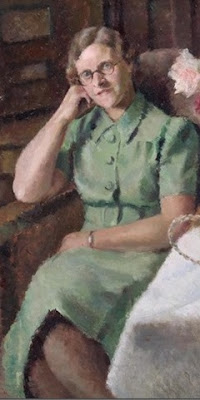 I was taken past the flap barrier of the counter into a small office which contained a desk, a typewriter, and a great many papers and files. The girl behind the desk took off her horn-rimmed spectacles to look at me, and then put them on again.

I have never been a huge fan of Julian Symons’ crime novels, while always having enjoyed the extremely opinionated and far-from-objective Bloody Murder, a book about crime novels (mentioned on the blog a few times).

When I was looking at impersonation stories for a recent post, this book bubbled up, and I thought I was sure I had read it recently – but that wasn’t making sense. That would be because the Symons title I had recently read was The Detling Secret, obviously practically the same thing. So I thought I’d better have a look at this one – which I don’t think I had read before.

It was written in the 1960s and set mostly in the 1950s, and had an inheritance/impersonation plot loosely based on the ideas brought out in the real-life Tichborne case (mentioned in my previous post, and also subject of this highly recommended Shedunnit podcast epi).

I enjoyed the first half of Belting very much: a missing son, David, reported killed in WW2, turns up to re-claim his place in a posh family. His mother is delighted to hear from him, his brothers much less so (it’s the ineritance… ) The mother wants to clutch him to her bosom, the brothers want to prove he’s a fake. The story is told by a more distant relation, who should be able to take a balanced view: Christopher is 18, between school and Oxford, and although an adopted member of the household, enjoying the wealthy lifestyle, doesn’t have a strong motive for favouring either side.

[I will refer to the returned soldier as the real brother, and his relationships as genuine, without prejudice as to how the book is going to turn out]

As an impersonation story, it’s not bad: everyone asks proper questions and makes their feelings plain. When David turns up, he greets his sister-in-law

“I must give myself the pleasure of greeting a new relative.”

“Just try it and I’ll set Brush and Bounce on you.” At mention of their names the bull terriers snarled appreciatively or threateningly.

A brother says “What happened at Durdle Door? On the cliffs? You were ten and I was seven.” After all the real David wouldn’t have forgotten. People also ask fake questions – ‘do you remember x?’ where x didn’t really exist. The dentist route is no good (same reason as Brat Farrar as it happens) and you are left thinking that DNA testing may have put an end to all these plots…

The outcome – well, if you’ve read a lot of crime books, there are a certain number of ideas that will not have surprised you. When something obvious is never mentioned, maybe that will come into play very late on? When people mention something mysterious and apparently off-topic and just filler chat, any experienced reader is going to be slotting it in. The book is quite precise and careful and well-worked out in many ways – but then there are odd loose ends and things that didn’t tie up or were explained in a rushed and unsatisfactory way. (The Link anyone? – relevant or not?)

All that is fine, but for me the book went totally off the rails in the second half. And – very unusually I can pinpoint the exact point where it started going wrong, the very sentence. P110 in my copy:

“Excuse me. I couldn’t help overhearing your conversation. I wonder whether I might be of assistance.”

In the next few pages, a chance passerby gets involved with the main characters in a bizarre and surreal way, and stuffy discreet Christopher suddenly tells him everything that is going on. I wondered if this was a dream sequence it seemed so ridiculous, and the chain of events that followed did not improve. There was a trip to Paris and a number of outrageous coincidences, people turned up for no good reason, the whole thing became, to me, embarrassingly bad. And then, wham bam, an explanation of the original setup, and then a final surprise.

The book has a lot of very affected literary references, sometimes used to make jokes and puns. Some of them were faintly amusing, but I think in general it was off-putting. Christopher was, to be fair, obviously meant to be annoying – clever-clogs Sixth former with too great an opinion of himself – but that didn’t make the arty business easier to take.

However. I read the book on Kindle, and there were a couple of lines that had gone missing because of a formatting problem. I tracked them down with some difficulty, but was glad I had. One character had written some advertising copy:

‘Here is my latest masterpiece, written for Bronk’s steak and kidney pies. Mum is leaning out of the window calling to the children, a Bronk’s pie piping hot on the table behind her. She calls:

Jack and Jill and George and Sidney,
Come and get it! Steak and kidney!!
Growing girls and boys all just
Adore its crispy flaky crust.

I could make out the first line of the verse, and then guessed what the second line would be. Then had another go, and got the whole thing, and realized that it was an extremely clever parody of some lines from Shakespeare’s Cymbeline:

Golden Lads And Girls All Must,

As Chimney-sweepers Come To Dust

The women in this book are problematic: Symons was very much of his time in his general writing about women. I think he was making an effort in this book to reflect a more progressive time – the liberated years of 1965. I don’t think he succeeds, but I’ve seen worse, and he was trying.

The top picture is from the ever-rewarding Smithsonian collection of pictures of artists, a resource I love, and shows a painter called Aline A Rhonie, a picture from 20 years before the setting of the book, but seeming a fair version of the Bohemian Betty in the book. And what a fab photo!

The young woman is a portrait of Miss M Steele, by Patricia Preece, from the Imperial War Museum, used with their kind permission.