Books about the Home Front in WW2 – A List 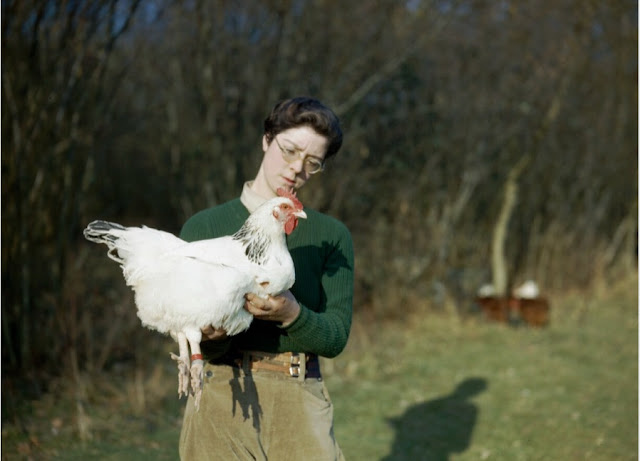 In my recent post on Annabel Davis-Goff’s This Cold Country I concentrated on one of the main themes – the heroine going to live in a big Irish house, part of the Protestant Ascendancy. But the book is also about the Second World War: before the action moves to Ireland, it is very much a Home Front book, with the heroine working as a Land Girl.

I love any book about the Home Front, and back in the day did a list of Best WW2 Home Front Books, a cross-blogging project with my friend Chrissie Poulson. The list is here.

But I have read more books since then! That list was keyed to the 70th anniversary of VE Day, 2015, 7 years ago. So here are some more I have read since then, a mixture of books written at the time, and historical novels from later.

Lissa Evans completed her loose trilogy with V for Victory (helpfully informative title) a wonderful book about Noel and Vee, highly recommended. Her research for this and Their Finest has given her expertise in this area – so:

She also told me to read The Fancy by Monica Dickens, and Fireweed by Jill Paton Walsh, both excellent finds.

And she also set me onto Maiden’s Trip by Emma Smith a dream-like excursion into the tiny world of wartime canalboats, and a true work of art.

I have very recently read Deed without a Name by Dorothy Bowers - again a contemporary and enthralling picture of London as the war starts to bite. The same could be said of the very cheery Murder’s a Swine, written by Pamela Hansford Johnson and her husband under the pen-name of Nap Lombard.

And then there is SusanScarlett/Noel Streatfeild’s Murder while you work, and JB Priestley’s Blackout in Gretley, with its unusual spying plot .

Graham Greene’s The End of the Affair is a book about adultery, but its evocation of wartime London is stunning and beautiful: my post has a consideration of the saddest lines…

Sarah Manning’s After the Last Dance re-creates the atmosphere of the Rainbow Club, R&R for US soldiers in the middle of London, with all the opportunities for romance and adventure that offers (and the post has some wonderful photos of the club).

Sunset over Soho by Gladys Mitchell doesn’t linger in Soho all that long (it goes off in the usual Mitchell weirdness), but while it is there it paints a wonderful picture of London in the Blitz - this 1942 picture from the Imperial War Museum collection shows a Rest Centre like the one in the book. 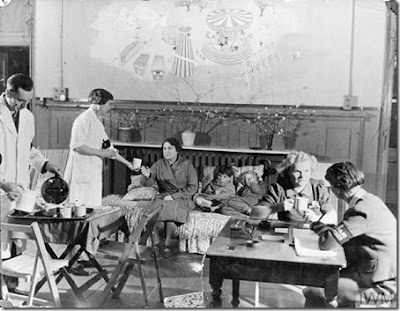 Eva Ibbotson’s The Morning Gift looks at refugees living in London at the beginning of the war – there are two posts. Picture is Canteen at Christmas – a café is important in the book as a sanctuary for refugees. 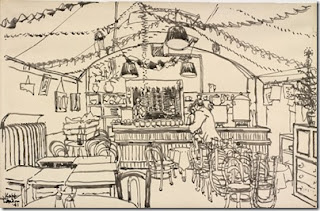 I have always loved Robert Harris’s book Enigma, about the code-breakers at Bletchley Park during the war, and I also love the film.

I claim that Patricia Wentworth’s Miss Silver books often seem as though they could be set any time in her curious world of romantic heroines, rich relatives and misunderstandings with young men – but The Traveller Returns has a most definite setting towards the end of the WW2, and is full of details of ration books and coupons and queuing. I used this wartime painting from the IWM. 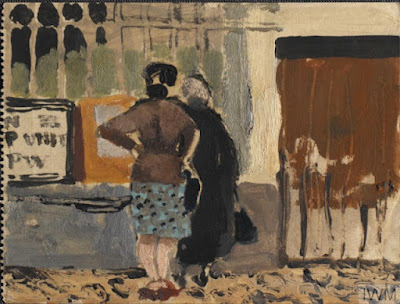 Unexpected: I read Monica Baldwin’s I Leap Over the Wall many many years ago, interested in the (non-fiction) story of a nun who leaves the convent after 28 years. I didn’t particularly notice then that she steps out in the middle of wartime England (1941), but on re-reading it is particularly fascinating as she has to learn a lot about modern life. There is a hilarious list of the things she had never heard of which were now part of everyday life:

And of course she also has to learn about wartime restrictions. It is a quite grim but compelling read, and she bravely but apparently consciously shows herself to be not a tremendously nice person (in my view). (She is also related to, and spends time with in the book, Angela Thirkell who took her light novels from the 1930s right into wartime – Northbridge Rectory & Cheerfulness Breaks In)

For anyone who shares my fascination with this era, I can recommend this 1997 book: Millions Like Us by Jenny Hartley, subtitle ‘British Women’s Fiction of the Second World War’. It is a great read, illuminating and entertaining – though leaving you with a list of books you need to obtain. (There is another book with the same name, also about women in WW2, which I am sure is very good, but you need to be aware. Both books take the title from an absolutely wonderful black and white film of 1943, again dealing with women’s wartime lives. I think I am correct in saying it is Lissa Evans’ – see above – favourite film.)

No qualms about using the top photo again. It is my favourite of all the pics I have ever used on the blog, and I bought a print to hang on my wall. It shows a landgirl, taken by Bryson Jack as part of a series of photos about poultry keeping.

As with the other pictures it is from the Imperial War Museum, who, as I keep saying, have an astonishing collection of photographs and other items which they generously make available to non-profit websites.