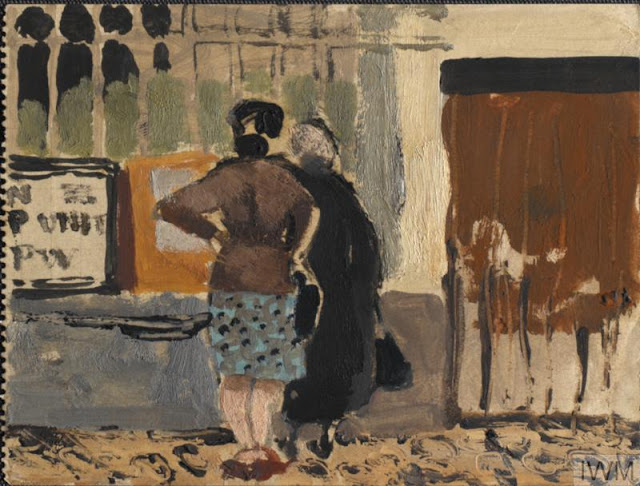 The book opens with a woman queuing at the Food Office to get her papers sorted so she can obtain rationed food. At first glance this picture seemed to show exactly that – people waiting in line to consult authority – though actually it is outdoors, and they are examining a notice on some railings. But: such a great wartime painting from the IWM, lovely but real, I’m sticking with it.

Miss Silver books often seem as though they could be set any time in the curious world of romantic heroines, rich relatives and misunderstandings with young men – but this one has a most definite setting towards the end of the WW2, with the return of someone who was trapped in France under German occupation and has now come back to cause trouble. But is she who she says she is? – impersonation (or potential impersonation)! always a favourite round here, and subject of several recent posts. (Another Miss Silver book, The Case of William Smith, is not exactly an impersonation plot, but is a sideways version…)

Traveller has a good elaborate plot and mystery, although slightly uneven in its lurching between crime story and spy thriller. There is a very complex family at the centre of the story – even by Wentworth standards, see entry on Latter End for some previous criticisms. I challenge anyone to draw the family tree of this one.

The heroine is introduced thus: ‘Lyndall was sitting on the hearth-rug dropping fir cones on a reluctant fire’, and I have been trying to work out why I find this harmless sentence so annoying - probably because no villain in a Wentworth book would be doing anything so soppy.

But still – this was a very enjoyable read, I liked it a lot, and the strong wartime atmosphere gave it a real interest.

There are some very specific clothes details, which you would be sure were correct:

There were still excellent clothes to be got, but you had to look for them, and they were a shocking price. She gave twenty-five pounds for a coat and skirt in a good Scotch tweed, sandy beige with a brown line and a brown fleck – very becoming. Eighteen coupons gone. A pair of brown outdoor shoes, and a pair for the house – fourteen. Six pairs of stockings – another eighteen. She found herself thinking less of the price of a garment than of the number of coupons that had to be given up.

And then the usual interest in tweeds – there are some mustard-coloured ones which are ‘a mistake’. Lyndall wears a ‘warm green housecoat’ and a ‘dark red house-gown’, and although always interested in housecoats (even specifically a housecoat from the same year), I couldn’t summon up any enthusiasm for this one.

I always like strange medical conditions, and there’s one character here who

For twenty-five years or so had had recurring attacks to which no doctor had ever been able to give a name. They involved the maximum of trouble to her family with the minimum of discomfort to herself. She had worn a husband into his grave, two daughters into matrimony, and the third to the brink of a breakdown.

There is one of Wentworth’s haunting cameo characters: Nellie Collins has a short appearance in the book but is as real as could be, and very affecting with her loneliness, her memories, and her excitement about chatting with a stranger on a train. ‘Although this local train from Blackheath to Waterloo stopped much too frequently to give a lunatic any real scope, Miss Nellie preferred to be on the safe side.’

There’s a description of her friend’s gossip, and you quite want a novel about this family instead:

fortunate and unfortunate occurrences, prizes won at school, the total wreck of a business, a son-in-law’s disastrous pre-occupation with a strip-tease artist – there was never any end to it

The impersonation in the plot involves a man whose bride (or is she?) comes back – they start cohabiting, and there is careful skimming over the question of sexual relations. The police ask him:

‘Would she have been in a position to know how soundly you slept?’

The husband is deeply unhappy (yes yes he’s in love with someone else, but honourable, do keep up) but in fact the long lost bride sounds quite dashing to those of us not part of Wentworth World.

In the middle of all this there is a hilariously annoying visitor, easily imagainable:

Joan was still talking about food. ‘You simply can’t eat it all,’ she said with the earnest expression of one who has tried.

Much is made in the book of a portrait of the returning woman (from happier times) – it proved impossible to find an oil painting that fulfilled the spec, but this photograph from the Florida State Archives gave the right impression? 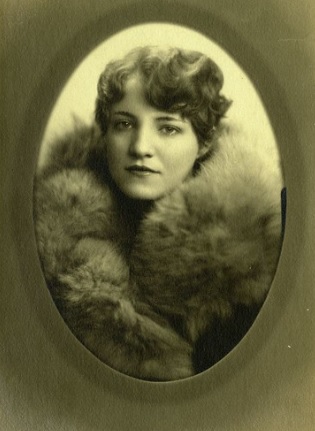 Soft dark fur over a thin blue dress, pearls hanging down, a smiling oval face and rosy lips, gold-tinted hair in a cluster of careless curls, the soft bloom of youth and happiness. Anne Jocelyn looked out of the picture as if she was alive. A young girl, bare-headed, drawing her coat about her, smiling as if she was just starting off for a party – smiling at all the pleasant things that were to come.

‘She wore a dark green dress with a turn-down collar of some musliny stuff’ – picture from Clover Vintage tumblr. I would say the collar here is crocheted, but the general impression is right. 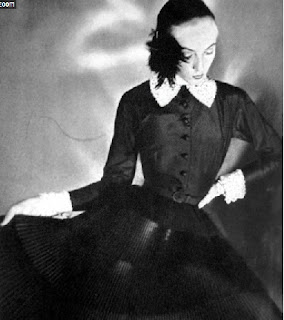 Miss Silver coughs 39 times. One of them is ‘slightly deprecating’, and other has ‘a trace of rebuke’. Then ‘there was that slight hortatory cough’ – quite a favourite description. (In case you have momentarily forgotten, hortatory means ‘tending or aiming to exhort’. Always helpful, that’s me.) there are ‘reproving’ coughs, and one with a ‘very firm and determined manner’. There is a ‘small sceptical cough’. In the middle of all this cough-as-weapon, there is even a hesitant cough – most unlike her.

Ladylike businesses: ‘My sister and I had a very refined little business. I have it still – fancy work, with a few toys and calendars at Christmas. Anyone would direct you – The Lady’s Workbox – lavender and blue curtains.’

Oddments: There is mention of a tape-map, which seems to have been a precursor of the A-Z maps – a map book with an accompanying special tape measure to help with finding places and judging distances.

Connections: There is a mention of characters from a 1946 Miss Silver book, The Key, and the invention of the explosive harschite which played such an important role in it.