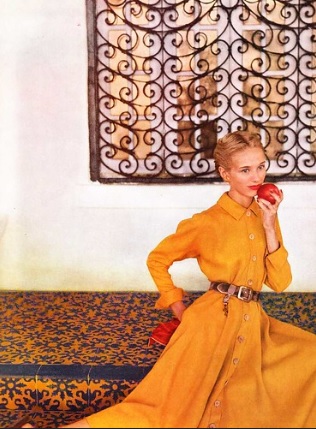 The beautiful Mrs Latter in her rose-garden, the late summer sunshine bright on her auburn hair and the cool, flawless skin which never tanned or freckled. Her dress of honey-coloured linen blended pleasantly with the flowers in their September bloom.

So we beat on, boats against the current, borne back ceaselessly into the past

First quote is from Latter End, the second is the famous last line of F Scott Fitzgerald’s The Great Gatsby, and says many things about life, but it also seems to describe my endless reading of the books of Patricia Wentworth, my comfort author of choice in lockdown.

Latter End has many elements in common with her other books in some ways, but is also an oddity. The villainous Lois, mistress of Latter End, is a spectacularly unpleasant person, and her depiction is very clever. She has turned getting her own way into an art form, and has also managed to virtually enslave two sad harmless women along the way. The predicament is more heart-rending than in some of her other books.

There is more of a lack of clarity than sometimes. The family involved was incredibly complex, and could have done with a family tree if the reader could be bothered to draw it up. ‘Julia and her sister Ellie Street were the daughters of Jimmy Latter’s stepmother by a second marriage. Antony and Jimmy were first cousins on the Latter side’ and on and on. There is an inheritance issue, but I’m not sure it had to be quite so complicated. Also, it wasn’t always clear how the generations fell out – there was one sad soul whom I had assumed was the poor aged spinster relation, but subsequent events meant I had to bring her age range right down. But I was never really clear of the relative ages of anyone. The family was clear in Wentworth’s head though, and there would be some line about Marcia and Lois (‘he pictured Marcia and Lois living happily side by side at Latter End’) and I hadn’t the faintest idea who Marcia (who never appears, she is long-ago dead) was. Thank goodness for Kindle, so you can check back.

The post-war setting is well done and full of detail – it’s hard to get servants (of course), the big house involves a lot of upkeep and work, everyone is trying to get back to normal but it isn’t easy, people are short of money.

There’s also a key scene in which two people can eavesdrop on a conversation in a bedroom. Now, the plot demands that they are separate from, and unaware of, each other, OK, but in a lovely old house like Latter End that shouldn’t be too much of a problem – how about ‘the room had two doors after some alterations in the 19th Century’? But oh no: this is the description:

Besides the ordinary door of this room there was another. It wasn’t one you would notice unless you happened to know it was there, because it was papered to match the rest of the room and there was no handle on this side. This room had once been a double room, and the slip beyond the papered door its attendant dressing-room, but ever since he could remember the dressing-room had been Marcia’s dress-cupboard. It was strictly forbidden to use it when they played hide-and-seek, but they always did. It was too tempting. The cupboard had its own door on to the main landing. It didn’t communicate with Marcia’s room, which lay on its farther side, but you could nip out of her door into the cupboard, and so into this room, and on to the back stair landing, with a choice of going either up or down, or through the swing-door back to the main landing again. Very strategic.

Seriously? No relevance to anything except the two separate listeners.

By 1947 Wentworth was a skilled and practised writer – these weird trip-ups are unexpected. Less surprising (she was always doing this) is the sudden mention of a character called Latimer (in a book about the Latter family) who is completely irrelevant and unnecessary, never actually appears, and has no role in the plot.

On the plus side, there was a device that I like very much – after a long, harrowing description of the situation at Latter End, overwrought and ready to explode, there is a sudden change: time has passed and one of the main characters turns up at Miss Silver’s flat to try to enlist her help. I always find that particular setup satisfying, as you wait to be told what has happened in the hiatus, and start to see it through another’s eyes.

I was intrigued by this:

It reminded him of a picture which he had once seen and been unable to forget. The artist had painted a girl who was just about to be shot as a spy. Before his colours were dry she was dead. In the picture she scarcely looked alive. Every time he looked at Minnie the picture came into his mind.

-Because I think I know the picture he means: I saw it last year in an exhibition of the works of William Orpen. Interestingly, there was something of a scandal about this very picture, because Orpen apparently didn’t bother with an actual spy, he painted his French mistress of the time. A very endearing story. I like Orpen’s pictures very much and have used them frequently on the blog. In this post I explain why I used him for some Agatha Christie characters. (One reason I like him so much is my conviction that you can tell from looking at his portraits that he really liked women.) I used the picture for the striking and memorable young woman in the book Portrait in Smoke by Bill S Ballinger. 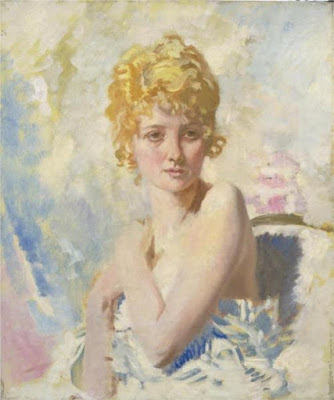 I decided, when blogging on her Ladies’ Bane, that I should have a Patricia Wentworth checklist:

Names: Well! For the first time ever there are no weird names. ‘Min’ is the nearest we get to oddity.

Cough count: Miss Silver coughs 52 times, the highest number I have counted yet I think. This time it is ‘slight and arresting’, or gentle, or reproving, or dry and in one case ‘Miss Silver coughed in a manner which informed him that she had not come to the telephone to listen’ – which is quite a burden for one cough to bear.

Here was Lois, as fresh as paint in a slim black suit which showed off her figure and flattered her skin, the white camellia of a blameless life at the newest, smartest angle, and the latest bit of nonsense adorning the auburn waves of her hair.

but feel I have rather overdone the black suits in my Wentworth reading/blogging, so was glad to find this linen dress for Lois to wear, from Kristine.

Occupations:  A magician features in a rather peripheral way (as one does in Ladies' Bane too), giving rise to this splendid sentence

Snubbing a magician would be a new experience – and what else does one live for?

It is a mystery to me why no-one has picked up the Miss Silver books for TV adaptations – there would be such wonderful opportunities for great settings and clothes. And any actress would be delighted to play Lois in this book – I actually pictured Michelle Visage in the role.

This is the book in which Miss Silver talks about the works of Charlotte M Yonge – see my post here for the quote.