Charlotte M Yonge – out in the world 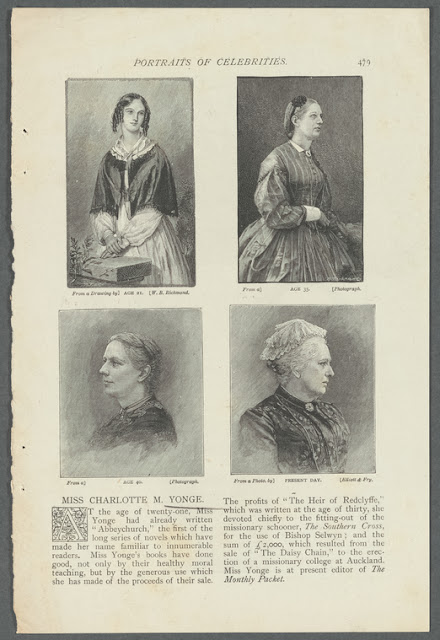 Earlier this week I looked at Charlotte M Yonge’s The Daisy Chain, and I had so much to say (IKR – you can hardly wait?) that have done a second post…starting with the connection with Louisa M Alcott’s Little Women.

Another Yonge novel, the Heir Of Redclyffe, is known to generations of young women as ‘the book that made Jo March cry’- but why does Little Women live on, where I doubt that many people read Yonge these days? The first thing to say is that you would have no doubt that LM Alcott read The Daisy Chain and was very much influenced by it. It seems that Charlotte M Yonge made publishers see that there was a huge market for books about day-to-day life, and that these should be realistic and contain everyday details, as well as exciting incidents. And that genuine-sounding family dialogue would go down well.

There are actually ways in which The Daisy Chain is better – it is more robust, surprisingly, and the family engages with the world more.  But Little Women has a more direct line and more to identify with. Perhaps it benefits from having a father who is completely absent from most of the book. There is more detail of household arrangements in LW, the characters of the children are very distinct, and there aren’t the younger ones that Yonge in fact scarcely bothers with. Anyone who has read it can name the four March sisters in Little Women – you’d be hard put to pick up on the May family. (When I was looking at the illos for this post, and saw ‘Gertrude’ I thought ‘Oh this isn’t The Daisy Chain – who is Gertrude?’ But she really is one of the sisters. And I read the book a short time ago…) 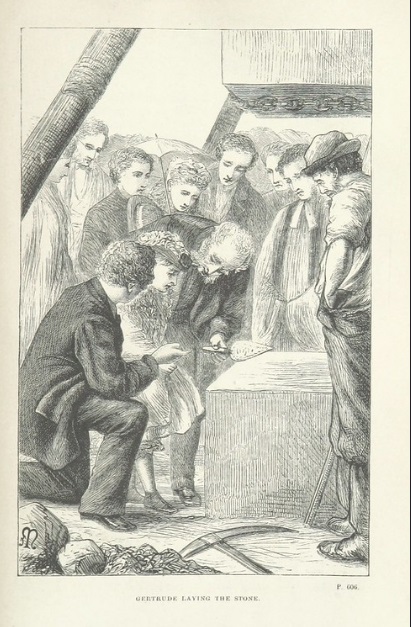 One of the features in common is there is much consideration of whether the family will be broken up by marriage, and Ethel and Jo are both much given to thinking about this, and basically not wanting people to go. (Though Ethel is a lot less nonsensical than Jo on this subject.) Yonge herself was very firm that she was not a feminist, but she had various views that we would now see as pro-women – including that fiction should be about more than just getting married, as reported in Charlotte Mitchell’s useful piece (the chapter on Yonge in the book on Anglican Women Novelists – see previous post).

Also, Yonge was obsessed with education, emphasis on girls, as are the characters in the book, and in a way education is the (daisy) chain…The chain is supposedly the family, but quite surprisingly that is scarcely mentioned: at the beginning one of the children says that Dr May thinks of his family as his Daisy Chain, and that’s about it. (TBH I had been fully expecting that the heroine would be called Daisy, rather than Ethel.)

You can see why it was popular: lots of characters and plotlines, exciting events, heavy-handed humour in the family (when it suits only – other apparently indistinguishable jokes are deeply frowned on). There are all kinds of goings on at the local boys’ school, there is romance and good works, death and disaster.  Really, The Daisy Chain is like every Victorian novel rolled into one, though absolutely without anything risqué or sexual. And, always, the large family. Yonge wasn’t an only child, but she felt solitary. She envied large families she knew, friends and cousins, and so liked writing about huge families because that is what she had wished for. 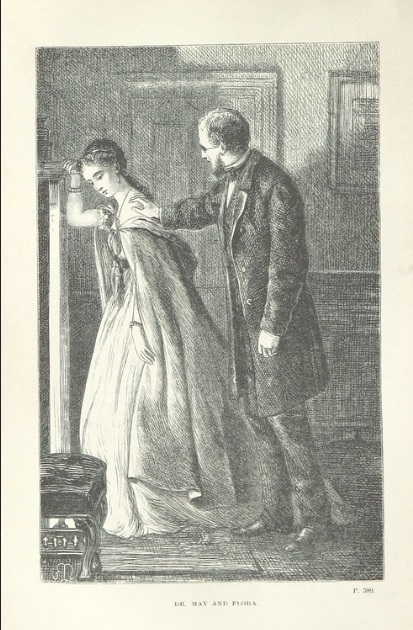 And, The Daisy Chain was a phenomenon in its day, with truly staggering sales figures, and an extraordinary place in popular culture. Why one book survives and another doesn’t is always a mystery…  But in the years following publication, EVERYONE read Yonge and loved her –

[I must admit that when reading this list of praises – in a most helpful short guide to Yonge by Alethea Hayter - I did hold out one hope: Surely not Wilkie Collins? And indeed, he thought her over-sentimental. I have not been able to track down a Charles Dickens quote on her though they must have read each other, it would be interesting to hear what they thought.]

Virginia Woolf’s Between the Acts is set around a pageant or performance and one of the scenes has a proposal of marriage between Edgar and Eleanor. As Charlotte Mitchell points out, this is so very much like a similar scene in The Daisy Chain as to preclude coincidence: Woolf must surely have had the Yonge book in mind. Fascinated by this idea, I read the two scenes side by side, and you would have to say that Woolf was parodying or mocking the Yonge – I don’t think you would say it was an hommage.

More recently Yonge has been more mentioned than read, and you can find those mentions if you look…

Patricia Wentworth, writing in the 1947 Latter End, has Miss Silver (not known for modern taste or a preference for contemporary life) say ‘Charlotte Yonge – how perfectly she recreates the mid-Victorian period. Lifelike in the extreme. No one has ever presented with such fidelity those large families which are now, alas, a thing of the past. Really most vivid. The Heir of Redclyffe is rather too sad, but the many tears which were shed for that poor young man are certainly a tribute to her art. I must own to a preference for a happy ending, but one cannot cavil when so much faith and courage are inculcated. One day I believe that Miss Yonge will be admitted as the equal of Trollope, if not his superior.’

In Agatha Christie’s  Evil under the Sun (1941),  as in Murder in Mesopotamia, Hercule Poirot notes the books on the shelf in someone’s room: ‘A Bible, a battered copy of Shakespeare’s plays. The Marriage of William Ashe, by Mrs Humphrey Ward. The Young Stepmother, by Charlotte Yonge. The Shropshire Lad. Eliot’s Murder in the Cathedral. Bernard Shaw’s St Joan. Gone With the Wind, by Margaret Mitchell. The Burning Court, by Dickson Carr.’ (The significance being, we surmise, that the books are being read by a  young woman whose father has remarried in the recent past.)

In Antonia Forest’s  Peter’s Room (p101),  Ann Marlow says she read Mrs Gaskell’s Life of Charlotte Bronte: ‘I thought it was  a book about children – a story I mean, like The Daisy Chain.’ (Ann is more old-fashioned and religious than her siblings.)
ADDED LATER (I keep coming across references to her):
Blog favourite Barbara Pym (in Paula Byrne's recent biography) is feeling depressed - this is around 1943. She reads The Daisy Chain: 'so well-written, very Compton-Burnett and very sad'. (Another blog favourite, EM Delafield, said that Charlotte Yonge had a devoted following during the Second World War.) Much later in her life (1971) Barbara Pym was enjoying Yonge again: 'what a wonderful length books were allowed in those days before the telly and all that'.
Is there any chance of a revival of interest in Yonge? I fear that the mentions will get fewer and rarer. But that would be a shame: she may be an acquired taste (as my friend Chrissie says in the comments on the earlier post) but her own story and life are fascinating, and the books certainly worth a try.

Pictures of Charlotte M Yonge from the NYPL

Illos for The Daisy Chain from the British Library.