This Cold Country by Annabel Davis-Goff 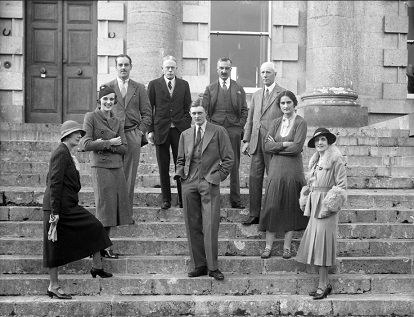 I don’t like books about squabbling Irish families (‘I can get that at home’) but show me the Protestant Ascendancy in a decaying house in Ireland and I am entranced.

This is the epitome of these books. Daisy, carefully class-delineated as a daughter of the English rectory, marries into a family of Irish poshos who have no money. It is WW2 – she is a Land Girl, he is on active service. She goes to live with his family without him, and with not much clue what is going on. Slowly various events, strands, plots, relationships are revealed. 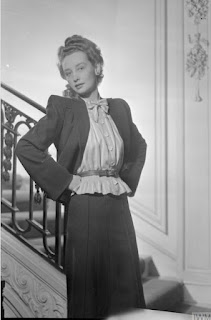 Yes yes we’ve read it all before – link to a previous sum-up post below – but Annabel Davis-Goff has a marvellous touch, and this one was compelling, entrancing, funny and touching. She wrote a few books at the end of the last century, but apparently not much since, which is a shame. She is the perfect Clothes in Books author – so good on clothes, finances and relationships, three of our favourite things. And, to repeat, she is funny. Also one of my favourite poems – Matthew Arnold’s On Dover Beach – winds through the book. 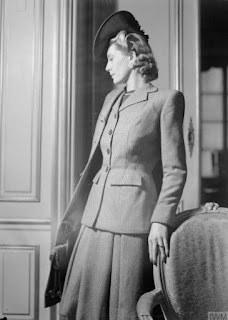 She also wrote The Fox Walk (2005) – a lovely book, with a fictionalized setting using her (Davis-Goff’s) mother's memories of childhood in Waterford at the time of the Irish Easter Rising, and looking closely at the history of Roger Casement in parallel to the fictional story. It is very funny and moving and charming at the same time, with a quite wonderful description of a children’s birthday party.

Her first novel was The Dower House (1997), a-NOTHER great book. All these novels have very similar settings and characters, though different timelines, and no disrespect to the author but it is hard to keep them straight in your mind. They have an air of Nancy Mitford’s books (all over the blog) but with their own very distinctive atmosphere, and their Irishness. [BTW there is also a book called The Dower House Mystery - it's a crime novel by Patricia Wentworth from 1925, and is also on the blog]

Annabel Davis-Goff was for some years married to the film director Mike Nichols. He went on to marry the journalist and TV presenter Diane Sawyer, and when this book (Cold Country) came out in 2002, Diane went to interview Annabel as part of the publicity…. You can read a transcript of the weird and slightly awkward result here. 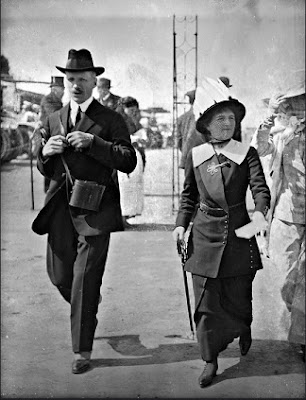 While I was looking for pictures for this entry I came across a photo which would seem to show relations of the author – there is discussion of the identification of those involved, but they are obviously a high-ranking Waterford family (just as in the book) with the right name in 1914. And they are going to the races, which features in the book (in the background). Picture from the National Library of Ireland.

The family on the steps, though from 1933, have the look of people in the book, same source – though frankly they look somewhat too friendly and agreeable to join the cast of This Cold Country – which is heading for Cold Comfort Farm territory at some points.

These are Land Girls picking potatoes in Wales (where Daisy worked before her marriage) from the National Library of Wales. 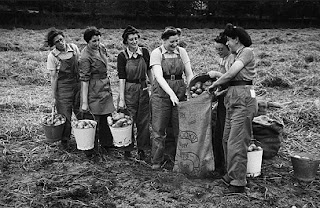 The two smart women looked like Daisy and Corisande, her sister-in-law, although the clothes are from the end of the war. Pics from the wonderful Imperial War Museum collection.

I have looked at

The Big Houses of Ireland (clothesinbooks.blogspot.com)

Before, and you can find many books featuring them listed there - some great authors. Also some of the same pictures – I love the opportunity to look through the archives of the National Library of Ireland, which is an absolute treasure store of pictures, generously made available.