There may be murderers, but no riff raff

Evil Under the Sun by Agatha Christie 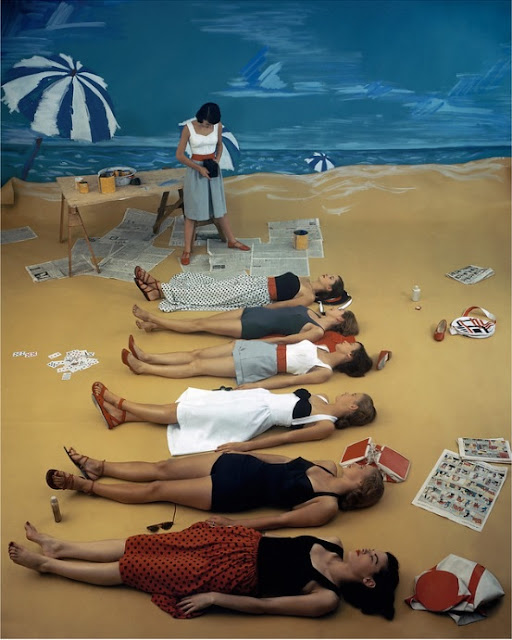 She was tall and slender. She wore a simple backless white bathing dress and every inch of her exposed body was tanned a beautiful even shade of bronze. She was as perfect as a statue. Her hair was a rich flaming auburn curling richly and intimately into her neck. Her face had that slight hardness which is seen when thirty years have come and gone, but the whole effect of her was one of youth—of superb and triumphant vitality….On her head she wore a fantastic Chinese hat of jade green cardboard. 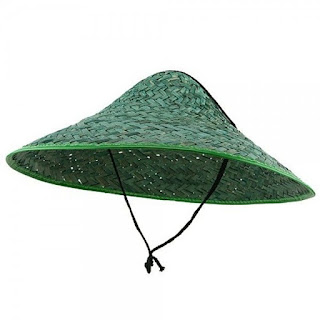 Christine Redfern came down the stairs. She was wearing beach pyjamas of a loose floppy pattern with long sleeves and wide legs. They were made of some green material with a yellow design. Rosamund’s tongue itched to tell her that yellow and green were the most unbecoming colours possible for her fair, slightly anaemic complexion. It always annoyed Rosamund when people had no clothes sense. 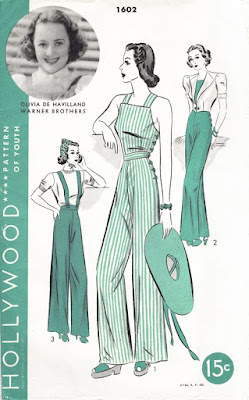 comments: I re-read Evil Under the Sun because of remembering that Charlotte M Yonge is mentioned in it – see my blogpost here. I am always uncertain where it lies in my personal Christie canon. It contains a lot of enjoyable features: the holiday setting, the varied group of people in the hotel (I described in a post earlier this week why I like books set in hotels), a collection of clues, and an extremely clever plot. Not, mind, one that you can imagine anyone ever carrying out in real life, but what does that matter? Christie had thought up her method and she executed it to perfection.

There are familiar tropes – the successful designer businesswoman, the memories of a very English childhood, an unhappy teenager, a siren-esque actress. The clothes are sumptuously good, and important. There is one of Christie’s signature moves – we are told what to think about the siren, gently but persuasively. But are we wrong? (This is not a spoiler.) Christie did that kind of thing very well: people claim she wrote in stereotypes, but what she wanted was for the reader to provide the stereotype. Then she would turn it round, and show you how she did it. Very clever. The clue-ing in this one is particularly smart, from start to finish.

But for me, it does not quite make it into her top 5: It is very similar to Death On The Nile (the group of holidaymakers, the triangle of lovers), but it doesn’t have the seriousness, the melodrama, the effectiveness, the memorable characters. I actually care about the people in Nile – this one, not so much. But still, a stylish and clever book.

And I suppose it is significant that I thought I MUST have done a post on it, but in fact have never got round to it. Although – in this post, which I am rather proud of, I Iisted Christie holiday tours in order of desirability, and put this book joint first as the best holiday to go on. (ie – let’s make this clear – they were being judged not the best book, or crime, or plot, but for the 'best holiday a keen Christie fan would wish to go on'). I said ‘the classic Christie holiday mystery, with an identifiable location based on the hotel at Burgh Island in Devon, which is to this day a lovely place to stay. There may be murderers, but no riff raff.’

Incidentally, there has been a big-screen film (Peter Ustinov) and a TV production (David Suchet) of this one, but nothing since 2001: surely ripe for filming again, with all the opportunities for star cameos, sunshine, swimsuits and beach pyjamas, and the white Art Deco buildings of the Island.

The setting is given as The Jolly Roger Hotel, Smugglers’ Island, Leathercombe Bay. But as I said in that other post, it is plainly Burgh Island, off the coast of Devon – also the model of the island in And then They Were None. 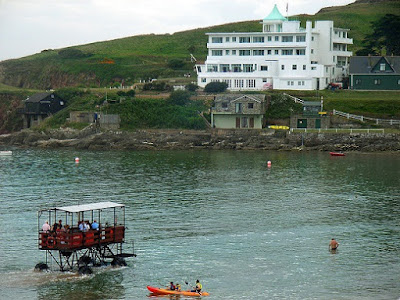 I have actually visited Burgh Island, and stayed in its extremely fancy hotel. I was celebrating a big birthday, and I absolutely loved it except for one slight issue. The hotel was a known hangout for all kinds of famous people in the 1930s, including of course Agatha, and the hotel called each room after a famous guest. They then thought it was a good idea to have identifying pictures on the room doors (rather than a number or a name) which resulted in our walking up and down the corridor wondering what on earth Jessie Matthews looked like, trying to find our room without disturbing too many other guests. ‘Well it’s not this one, this is Noel Coward.’ ‘Who is this, do you think this is her?’ (Jessie Matthews was a big English star in the 1930s, nearly had an important Hollywood career, and ended up as Mrs Dale in the radio serial Mrs Dale’s Diary.)

I would have gone back (anytime) but soon afterwards, Agatha Christie’s own Devon home, Greenway became available to stay in, and I took my family there instead for many years running. The first time we went, they said ‘Where is it? Is it nice?’ and I said ‘No idea to either, we’re just going because it’s Agatha’s house. Shut up and enjoy.’ But we all did, and we loved going back there.

Bodies on a beach are a major feature of the book: so the fashion photo by Serge Balkin with fake beach seemed appropriate.

Hollywood actress Olivia de Havilland died recently: the branded pattern in her name comes from her heyday in the 1940s.