He Never Came Back by Helen McCloy 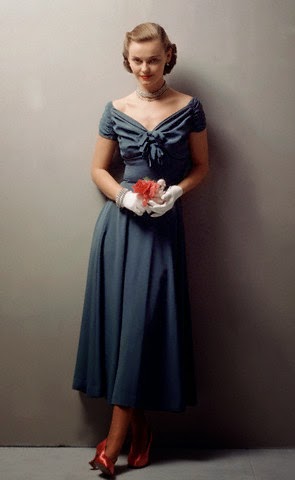 [Sara Dacre has gone into the ten-cent store to buy a lipstick]
She spent a few minutes choosing a lipstick. It had to be light, but red – no coral, no orchid. As she moved on, she saw a glitter of pendants and bracelets.

One pendant - a single lump of red glass that lay in one corner of the bin, half hidden – caught her eye. The glass was round and large as a robin’s egg … ‘It would brighten my grey taffeta,’ she said. ‘It’s just the same clear flame-red as the lipstick.’


[arriving for dinner with her aunt] 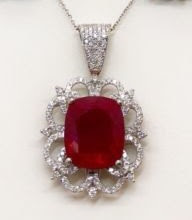 She left her cape in a guest-room and combed her hair by mellow lamplight that hardly reached the cloudy mirror in the carved frame. She saw a wan girl dressed in grey with the dull shine of old silver, a brilliant blob of crimson at her throat gathering up all the rays of muffled light and casting them back at the beholder like a flash of fire. 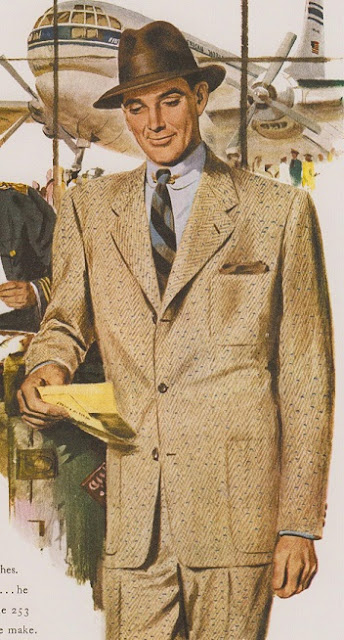 ‘What was he wearing today?’

‘A soft felt hat, fawn colour, the kind you can wear with either a grey or brown suit. Today his suit was brown. Herring-bone I think. And he had nice, heavy dark brown shoes. They were the only thing about him that looked expensive.’


commentary: Helen McCloy always does great New York atmosphere – her young man asks Sara Dacre if she will do dinner: ‘I know a cosy place at Madison and 34th where Martinis are really dry and steaks just warm in the middle.’ As long as I have breath in my body, a sentence like that will make me long to be in New York (though probably I want to be there in the 1950s, hard to organize). He calls her Dacre – is it just like Elaine Dundy’s 1958 The Dud Avocado, where the two main characters are ‘on last-name terms’?

In the end they visit an automat, with a vivid picture of how that works - ‘roast beef tonight and we just got down to where it’s rare!’ – and the contrast with ‘lousy tea-shops on Madison’.

Sara’s landlady wears yellow Turkish lounging pyjamas – this pic is Louise Brooks, wrong era, not yellow, but how could I not use it? 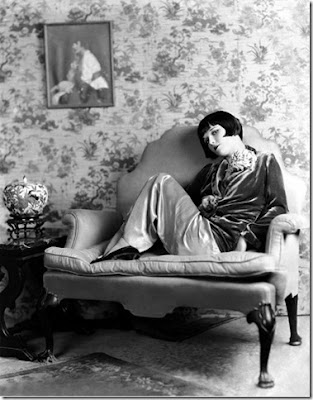 And, a woman after my own heart, Sara’s aunt loves murder stories, and says
‘Future historians will study them for their unconsciously revealing picture of morals and manners during a period when novelists were more concerned with technique than the world around them. Already Sherlock Holmes gives us our most detailed landscape of Edwardian London.’

Just what I always say – not about Holmes, but my contention is that you can learn all the sociology and anthropology you want from crime fiction.

And imagine the posh perfection of the grammar of this sentence:


‘What would you do about it if you were I?’

This book is a very short one – a novella really – and doesn’t feature McCloy’s series sleuth Basil Willing. It takes place over a very short period of time, and can be read in a couple of hours in a breathless rush. (Best so in fact – it’s a great story, but I had a few questions when I thought about it more later… ) It has some excellent tropes: impersonation (always a favourite around here), and the missing jewel which is (maybe) going to be returned in the dark, a la the classic Beau Geste. There is a particularly clever take on a situation where young Sara thinks that an impostor has turned up, but everyone else is convinced he is the real thing. One part of the explanation is a bit cheeky, but forgiven because so cleverly done.

There is a character called Gregory Sallust: presumably it is a coincidence that the truly unique author Dennis Wheatley wrote a whole series about someone of that name from the 1930s onwards. (In all modesty I do recommend my post on DW - I have just re-read it myself with enormous enjoyment.)

I love Helen McCloy – books by her all over the blog – and there is yet one more reason for looking forward to the Bodies From the Library conference in London in June: My good friend Chrissie Poulson is going to be giving a talk on McCloy. Cannot wait.

1950s man in a suit. Grey dinner dresses from Kristine – one a touch too stylish, the other not quite taffeta.