Being an American in Paris in the 1950s

Posted by Clothes In Books on December 02, 2012
Dress Down Sunday -
what goes on under the clothes

The Dud Avocado by Elaine Dundy 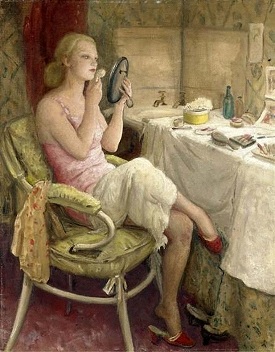 The theatre was ice-cold, and as I slumped and quivered in my slip in the dressing-room trying to keep my hands steady enough to put my eye make-up on, I wondered how on earth I’d gotten there in the first place. It was all supposed to be a joke wasn’t it? It was all supposed to stop long before it actually happened, wasn’t it? I wasn’t really supposed to get out there in front of a bunch of strangers and make a fool of myself, didn’t God know that? I took a deep breath and watched it come out in a frozen puff. That’s going to look great on stage, I thought, especially in the love scenes…

[after the performance] I suppose Larry was right, I suppose it was a pretty revolting spectacle to come into a dressing-room after a show and find two of its leading players screaming abuse at each other. Especially as I was back in my slip again and sitting on the floor (I’d had such a bad attack of post-something-or-other nerves that I couldn’t even sit on the chair), while Lee was staring starkly at himself in the mirror. It was all Lee’s fault, of course.


observations: It’s a bit like Catcher in the Rye for girls. Elaine Dundy’s masterwork tells of a young American woman in Paris in the 1950s. Sally Jay Gorce is rich, very privileged – an uncle is funding her for two years fun – and Paris is quite poor after the war. So she can live cheaply because of that, bring her American ways and American dollars to the grateful people of Paris, and watch them and observe their habits, while meeting up with other Americans that she knew back home.

Of course it doesn’t read like that if you are in your teens – it’s just a surprisingly open and honest account of her adventures and romances, with some lines to make you laugh out loud, and a lot to make you wish you were living in Paris in the 1950s. Sally Jay wants to act (of course!) and the reason she is furious in her dressing room is because her co-star in a Tennessee Williams play came onstage with a cockroach on his lapel, and she is scared of insects.

‘One falls for Sally Jay from a great height from the first sentence’ is the review line most often quoted about this book, and if you substituted ‘first chapter’ that might be right - I still remember   (after 30 years) reading her greeting Larry as 'Keevil' and his calling her Gorce, and her saying ‘we were on last-name terms’ and thinking, yes, funny, and you know what she means. It is still funny on a re-read, but you can see both the darker side of the story (Larry!) and that some of it shines out as pretty callow these days…

Links up with:  Americans in Paris in the 1920s and 30s: Hemingway and Fitzgerald here, and Hemingway’s wife here. Actual Catcher in the Rye here. For more Dress Down Sunday, click on the label below.
The picture is Laura Knight’s The Dressing Room.