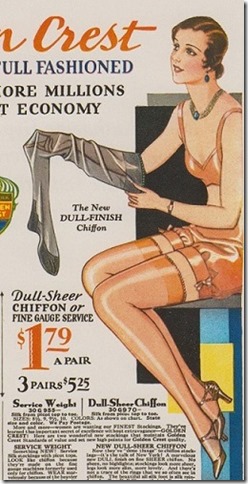 [the Duke De Richleau, Richard and Simon have taken over a hotel room in Madrid at short notice. There is evidence of the previous occupants…]

Richard picked up a silk stocking of cobwebby texture. “I wonder where the owner of this pretty thing is now. I wouldn’t care to be in her place if they lugged her away in the things she stood up in.”

“Don’t be an ass,” said Simon irritably. “Naturally they’d have let her dress but she probably chose tweeds or something sensible. If she’s a foreign visitor she’ll be safe in her own Embassy by this time. If not, she’ll have taken refuge in one of the convents.”

“I saw something move on the top of that wardrobe,” declared De Richleau, grabbing his gun.

“You can dispense with the heavy armaments,” laughed Richard sitting up. “If you saw anything it was only the poor girl whose bed we’ve been sleeping in. Don’t be afraid, Señorita. We won’t hurt you.” 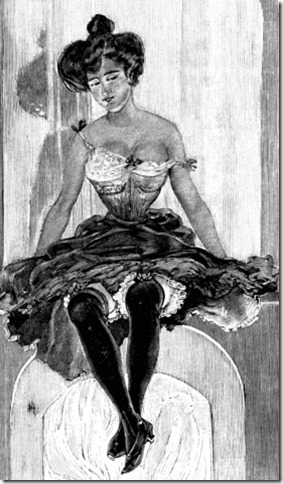 Slowly the head of the girl appeared again. “You no hurt,” she said with a frightened look. “You no hurt.” De Richleau quickly reassured her in Spanish and asked her how she came to be up there; upon which any little bird on the window-sill might have observed the strange sight of two gentlemen sitting side by side in bed holding grave converse with a lady clad only in the thinnest of nightdresses perched on the top of a high wardrobe.

commentary: My goodness but this is a book of an earlier time. I was recently describing how I find Tana French’s books unputdownable: my good blogfriend ggary said this in the comments:


I know exactly what it's like to have to reach the end of a book. Some years ago I was reading a Dennis Wheatley thriller called THE GOLDEN SPANIARD. Over the previous few days I had been reading it in a fairly leisurely manner, but the pace hots up incredibly in the last quarter of the book, and instead of reading a chapter before going to sleep I had to read the whole damn before I could go to sleep. It was about three in the morning when I finished, and I felt like death the next day, but at least I knew how it came out!

So naturally I had to find the book immediately - luckily it is readily available on Kindle. It couldn’t be more different from Tana French, but ggary is absolutely right – it is completely compelling as it gets to the end. The good guys are on different sides, and the back and forth in the final pages, as they struggle for possession of something very valuable, is astonishing and beautifully plotted, and very funny – you keep thinking ‘Wheatley cannot have another twist’ – but he can.

Interestingly, there is an announcement at the beginning:


This book has been lightly edited for style and pace, at the request of the Wheatley family.

They didn’t edit it for some other features. This is 1938, and the Duke is trying to convince Simon, who is Jewish, that the Nazis aren’t that bad…


“For God’s sake, Simon, use your sense of proportion. The German Jew-baiting is horrible, I know, but it isn’t wholesale murder.”

If it were me I would have taken that out, but it’s arguable I suppose: presumably that IS what an observer might easily have said at that time.

Wheatley was a very very popular and prolific thriller writer, and wrote a series of books about a dashing foursome performing acts of derring-do: The Duke De Richleau and his friends Simon, Rex and Richard. (The most extraordinary of these books is The Devil Rides Out, which became a much-beloved film: ‘De Richleau had spent many years delving deeply into strange mysteries and much that was hidden to most earth-dwellers had been made plain to him.’)

This is the first Wheatley book I’ve done on the blog, but he has been mentioned before, in relation to weird religion here (Ngaio Marsh), and to long boring passages about weaponry and strategy (James Bond).

This time the four musketeers are split by the politics of the Spanish Civil War. Now, you wouldn’t be in much doubt which side Wheatley’s heart was on, but you have to give him some credit for trying to present both sides of the story, and show that neither side were angels (though there are some pretty nasty descriptions of atrocities, largely on one side). I got my first view of the Spanish Civil War from Biggles in Spain (‘Trouble? Both sides are after his blood!’ as it said on the back of the paperback) and the politics here are approximately at the Biggles level. (No offence to anyone here).

The Duke has this to say:


It would be good to draw a blade again, if need be, in defence of all the principles which he had always considered stood for a sane and decent world.

He is a character whom one suspects Wheatley likes more than anyone else did. Would love to hear the other side of this:


His guests always looked forward immensely to the quiet evenings they spent with the Duke. De Richleau knew so many interesting people and could discourse with wit and erudition upon a thousand topics. Normally it was a joy to listen to his beautifully modulated voice recounting amusing incidents or calling up great figures out of the past to relive the secret history that lay behind the shaping of the modern world.

He sounds a terrific pompous bore, with his great principles and important views of honour and shame. However, he is also a hoot. At one point the adventurers, at loose in Madrid, need dynamite urgently. Where will they find any?


“Don’t worry.” The Duke’s mouth tightened into a hard line. “I’ve often found it useful before. There is some in one of those suitcases which you are holding at the bank for me; only it is coated with soap and made up to look exactly like the shaving sticks I habitually use.”

Later on he comes up with a spacey idea for disguising some gold bullion:


“Take an aluminium saucepan. Say it weighs a pound. Pour thirty-five ounces of gold into its bottom. It will then weigh about three and a half pounds. That’s no more than the weight of an iron saucepan. Paint it over and it will look like an iron saucepan. Get the idea?”

Resistance is useless: you have to enjoy a book with these features in it (look how much I have written about it!). It is, with a little judicious skimming, quite relentlessly entertaining. And there was a genuine surprise in the final sentence – I’d have thought I’d have spotted the plot twist, but no.

Thank you to ggary for tipping me off…