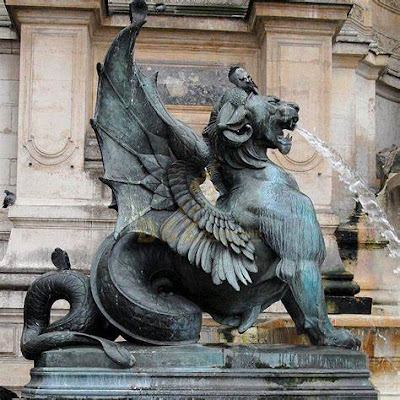 I recently posted on Dorothy Bowers’ WW2 crime novel Deed Without a Name. The murder victim lives in Mulberry Fountain, an imaginary square in London’s Chelsea with a fountain in the middle:

When Pardoe left the house the square was as tranquil and deserted as Sunday afternoon in autumn could make it. He paused for a moment by the fountain which gives its name to the place, a pompous marble structure at the bottom where Trumpeter’s Row runs into Smith Street. Eighteenth century infants of highly muscular physique and simpering demeanour, whose stupid attempts to clutch the thrashing hooves of Neptune’s horses had kept them in jeopardy a century and a half, made a most unpleasing group in those quiet surroundings. No water played now; only blown leaves and a drift of dust, like the last whispers of its century, lay in the basin.

This made me think – are there no beautiful fountains in literature? There’s a splendid bit in Philippa Gregory’s Other Boleyn Girl, where Anne Boleyn has had a fountain made as a gift for Henry VIII:

It was a most astounding sight: a fountain made of gold inlaid with diamonds and rubies. At the foot of the fountain were three naked women, also wrought of gold, and from their teats spouted springs of more water.

‘Grand.’ I didn’t add: ‘But vilely ugly,’ though I could tell from George’s stunned expression that he thought the same.

Now we turn to JK Rowling’s Harry Potter and the Order of the Phoenix. Harry has been summoned to the Ministry of Magic:

Halfway down the hall was a fountain. A group of golden statues, larger than life-size, stood in the middle of a circular pool. Tallest of them all was a noble-looking wizard with his wand pointing straight up in the air. Grouped around him were a beautiful witch, a centaur, a goblin and a house-elf. The last three were all looking adoringly up at the witch and wizard. Glittering jets of water were flying from the ends of their wands, the point of the centaur’s arrow, the tip of the goblin’s hat and each of the house-elf’s ears. 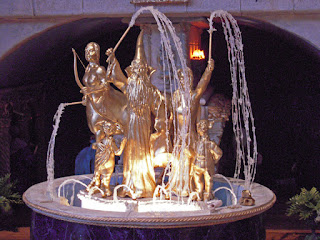 [the picture shows a model by Magical Miniatures]

And in Pursuit of Love, the blog favourite by Nancy Mitford, this is one of Fanny’s Christmas presents:

I must admit that my wicked parents turned up trumps at Christmas, and my presents from them were always the envy of the entire household. This year my mother, who was in Paris, sent a gilded bird-cage full of stuffed humming-birds which, when wound up, twittered and hopped about and drank at a fountain. 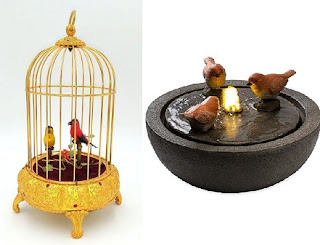 Somewhere between the two pictures, but undeniably creepy-sounding.

Then I remember reading somewhere (and this is NOT MY VIEW) that Irish towns never have nice fountains. Can this be true?

Ireland was being contrasted with Europe and that prompted my helpful memory to come up with a  counter-argument, AND it’s in one of my favourite books, the magical Saffy’s Angel by Hilary McKay.

Saffy goes on holiday to Italy with her friend Sarah’s family, and they are in a hotel in a square in Siena.

‘Lions’ said her mother after a careful look.

‘Those are their manes!’ said Mrs Warbeck.

Enter the majestic Mr Warbeck – one of the finest characters in any book ever. (I sent Saffy’s Angel to a friend and she texted me to say ‘I am in love with Sarah’s father’ – the details are here):

Mr Warbeck can see what is wrong: ‘That fountain was potentially lethal! One good hard frost and there would have been a sheet of ice all over the square!’ The hotel manager summons an engineer who makes a correction according to Mr Warbeck’s calculations, and everyone is delighted. The Warbecks plan to return next year to visit the fountain.

The top picture is not Siena, but I thought was a very nice fountain that might be a lion or a dragon.

So I found one! A beautiful fountain in a book. Does anyone have any more?

A nicely niche question. I’m not really expecting a flow of suggestions, but happy to hear about fountains good or bad… 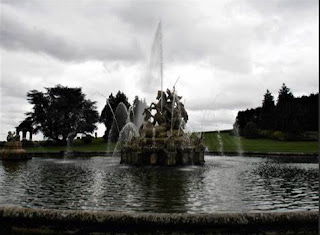 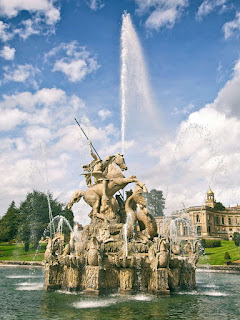 These pictures show the Perseus and Andromeda fountain at Witley Court in Worcestershire. It probably demonstrates that this is subjective, and that beautiful is on a knife-edge with ugly: I think this fountain, which I have visited several times, is very beautiful, YMMV.

ADDED LATER: Of course people came up with great suggestions. See comments below. Other books mentioned were Tom's Midnight Garden & AND Hilary McKay herself came up with two, from E Nesbit and PL Travers, in this tweet:

Thank you for including Saffy and Mr Warbeck (for whom I have a v soft spot) in your latest addition to the best of blogs.
I am attaching 2 fountains for you. E Nesbit and P L Travers, and you are right, there should be more fountains in books. pic.twitter.com/06p51ErVnO