The Pursuit of Love by Nancy Mitford

This is one of my top 10 all-time favourite books. It is a great novel, it is an enduring work of art: and it is also a comfort read, a divine comedy, and a book of sadness. It has featured on the blog many many times – in its own right, in posts on the Mitford family, and in lists – books to read when you are recovering from illness, books that make me laugh, books about young women making their way in the world, and more. Click on the links below for more about the Mitfords than anyone but me would want to know.

It is also one of the original inspirations for this blog – this is how I described that last year, starting with this quote from the book:

Louisa was married in the spring. Her wedding dress, of tulle frills and sprays of orange blossom, was short to the knee and had a train, as was the hideous fashion then. [Her sister] Jassy got very worked up about it.

‘To be buried in, I mean. Women are always buried in their wedding dresses aren’t they? Think of your poor old dead legs sticking out.’

I always had a very clear picture of that wedding dress, and ‘Your poor old dead legs’ is a phrase that will never  not make me laugh. And I thought how nice it would be to find a picture of Louisa’s dress. And I thought of Harriet Vane’s wedding troubles, and Jane Eyre’s. And other people, who loved the same books as me, surely would like to see what those various outfits might look like. So here we are, 9 years later, more than 2200 posts and nearly as many books, 2 and a quarter million views…. 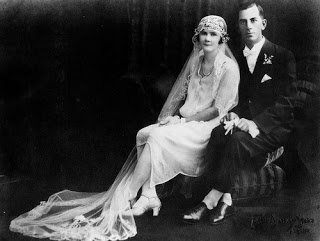 And another thing: there is a child called Moira

‘Not Moira, darling, you can’t [call her that]. I never heard such an awful name.’

Also, a mystery – Nancy M never tells us what happened to Moira, and my theory is she forgot her existence.

This first name has been completely rehabilitated in recent years (well of course I also think I have done my bit to endear it to people) by the character Moira Rose in the TV series Schitt’s Creek. There are now more wonderful Moira gifs than anyone could ever use, and quite right too. 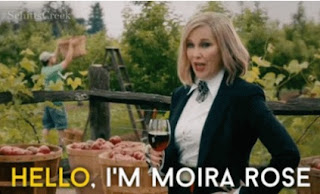 And now there is a new 3-part adaptation of Pursuit of Love being shown by the BBC, so room surely for one more post… I am loving every moment of the mini-series, but that is by no means true for all the many fans of the book. Emily Mortimer has made many changes, and has borrowed dialogue and ideas from Nancy’s other novels and also from her letters and other writings. I think that’s fair play, though understand others don’t agree. I love the appearance of the programme – the settings, the rooms, the scenery and the clothes are amazingly enjoyable, even though often not quite likely or authentic. Hard luck on those who hate it - I could watch it all day, and wish there was more of it. The worry is that Love in a Cold Climate is the obvious sequel (and previous adaptations have combined the two books) – but enough of it has been incorporated here to make that difficult: for example some of Lady Montdore’s lines have been given to The Bolter, which shouldn’t work at all but does. 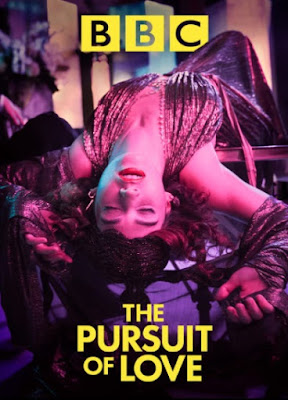 My own theory about the adaptations, by the way, is that there has to be new versions of Pride and Prejudice and Nancy Mitford every 20 years of so, and then many young actresses get to play the sisters, and forever afterwards when watching other things you can safely say ‘wasn’t she one of the Bennet girls?’ or ‘Surely she was Jassy Radlett?’ See a mention of this in my post on the Double Halliwell – a niche post, but one of my own personal favourites of all those I have done, and immensely popular with the small group of people who were not mystified by the process it describes.

This time there are some additional nuances, and the story is somewhat darker. In the book it says Linda rarely drinks – here she drinks too much. Lord Merlin (wonderfully played by Andrew Scott) is an altogether more worrying and less trustworthy character.

The script opens up the relationship between Fanny and Linda, and this it does tremendously well. The intense relationships between young women in their teens has not been examined enough: the joy and the darkness, the longing for life, the jealousies and annoyances. The weirdness of being a teenager, the intensity and the glory and the unexpended energy, the obsession with sex and love, clinging onto each other and the future ahead of them, the passionate highs. Having a friend you really worry about – as someone said on Twitter ‘if you say you don’t have a Linda as a friend, then you are a Linda’ – but who also can make you feel a bit dull.

See post on the Emma Jane Unsworth book Animals for more on this. 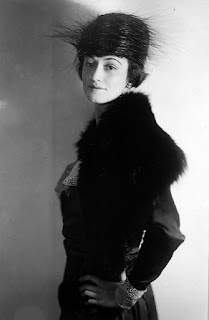 I thought it brought up shades of The Great Gatsby (1926), another of my favourite books but not a comparison I have ever made before.

The book has one of the great endings of all time, and one that brings you up short, especially if you thought this was a romantic comedy.

The Bolter says to Fanny

‘Don’t you think perhaps it’s just as well? The lives of women like Linda and me are not so much fun when one begins to grow older.’

‘But I think she would have been happy with Fabrice,’ I said. ‘He was the great love of her life, you know.’

‘Oh, dulling,’ said my mother, sadly. ‘One always thinks that. Every, every time.’

And with all due respect, I have always thought that could apply to the sad early death of Princess Diana, who may well have traits of Linda. And since then, sadly, I have felt it about the deaths of other women. To be clear – if it is necessary – I am not saying for one moment that it was good that those young women lost their lives,  just that life is not always kind to people, men and women. In a world where you can be anything, be kind. And hope that no-one ever has to say 'just as well'.

Mitfords Nancy Mitford The Great Gatsby The Pursuit of Love