Dressing for a Funeral: Saffy's Angel 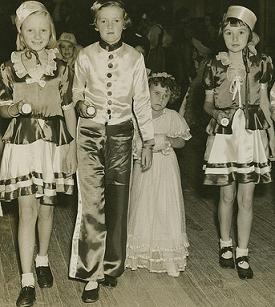 [The four children of the Casson family are deciding whether  they should go to their grandfather’s funeral]
“…Saffron realized that Caddy was right. They should go, all of them. She said ‘I’ve got a black skirt. The one with the bead fringe that I got sent home from school in…What about Rose?’
Rose, who had been pretending to be asleep, bobbed up and said, ‘I shall wear my party dress.’
Caddy and Saffron nodded. They approved of Rose’s party dress. They had chosen it themselves and bought it out of the housekeeping money, which in the Banana House was kept handily in a jam jar on the kitchen mantelpiece. Caddy had said ‘Rose ought to have a proper dress.’
They had chosen sequinned black velvet and silver taffeta. It cost one hundred and ten pounds.

[Their father] Bill Casson, who had gone ahead to the church to make sure that everything was arranged to be as efficient and unexciting as possible, nearly passed out as his family filed in for their grandfather’s funeral.
Rose in her silver skirts led the way, followed by Indigo in faded jeans, and Saffron, tinkling with beads. Saffron’s bright gold hair streamed down her back like a tangled fleece, but Caddy’s was piled high and bravely on the top of her head, and her dress… was very tight and very, very short…
[Their mother] Eve staggered after them, clutching a box of mansize tissues, a hip flask of cough medicine and a large bunch of daffodils... ‘Don’t they look beautiful?’ [she said]…”
observations:


When I tried to describe the appeal of Hilary McKay’s Casson family, I completely failed to capture them – it came out as “eccentric family, makes you laugh, makes you cry, deals with issues but not annoyingly”: all of which is true, but would make you yawn – “seen that before” – rather than rush to read them. One person’s eccentric is another’s flesh-creeper.
So this entry has been turned over to another fan (but, credit claim, one to whom I introduced the books), one of my followers. He said they are a “cross between [Brit TV series] Outnumbered, the X family and Ballet shoes” but with the caveat that as you don’t know the Xes (real friends of ours), this won’t help. But then went on:
“Like a cross between Enid Blyton’s Malory Towers school stories (staff and pupils), the cast of Dodie Smith’s I Capture the Castle, and the Just William stories. As intensely-plotted and emotionally draining as a Saki short story, while appearing to be as wild and free and joyous as a dog chasing deer in a park who knows its master is running after it going 'Jesus Christ. Fenton!!!'"


There are five other books as well as this one. Rose's dress cost about $175.


The picture shows some children from a performing arts school, dressed for a show. It is from the State Library of Queensland's collection, and is featured on Flickr.