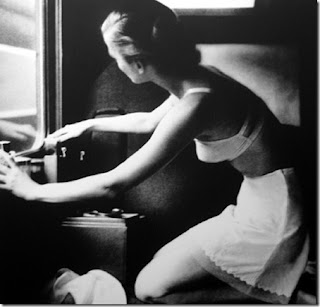 Then I heard a step behind me and turning round I saw Mrs Danvers. I shall never forget the expression on her face. Triumphant, gloating, excited in a strange, unhealthy way. I felt very frightened…

She put the slippers back on the floor, and laid the dressing-gown on the chair…. ‘You’ve seen her brushes, haven’t you?’ she said, taking me to the dressing-table; ‘there they are, just as she used them…’

‘I keep her furs in here… This wardrobe is full of her evening clothes.. She looked beautiful in this velvet…. These are her underclothes, in this drawer…’ 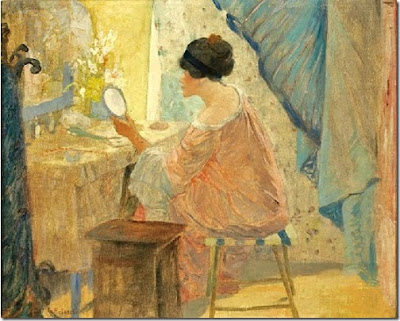 comments: I did a post on Rebecca for last month’s Friday Fright Night theme, but like the dead wife herself, I couldn’t leave it at that. Je reviens…

This book is knitted into my background: it is one of the handful of books that I am no longer surprised to find popping into my mind on a regular basis. ‘Oh that’s just like the time in Rebecca...’ or a quote, or a brief description, or a comforting phrase. Not that much comfort in Rebecca - but  perhaps slightly in that I am no longer so young that I might be like the heroine in the horrendous scene where someone has been sacked for a breakage that she did, and she has to own up in an embarrassing way. Daphne du Maurier was 31, successful and confident when she wrote it, but she had a very good memory for what it was like to be none of those things. The book feels lived, through the new bride’s eyes - not imagined or made up.

Reading it again it lives up to your memories, and sucks you in all over again. It is startling. The cleverness, the strangeness, the weird characters. The way it resembles lots of books, apparently, but is nothing like them.

It did make me wonder about the makers of all adaptations. When they read the source material, as they plainly did, WHAT WERE THEY THINKING? Did they not even try to see what it was about, and how dark it was (‘we’ll soon get rid of that’) and how the beginning and the ending are showing a Greek tragedy? Oh well.

It came to me that I was not the first one to lounge there in possession of the chair; someone had been before me… Unconsciously I shivered, as though someone had opened the door behind me and let a draught into the room…

Some surprises: when you think about the book afterwards you wonder why Max falls in love with the heroine, but actually DduM makes that quite explicable: he enjoys her company and her innocence, she is clean and pure compared with Rebecca. Yes, it’s OK. (In the new film they made her a touch more exciting – for example good at driving, and ordering oysters for breakfast. Fair enough I thought.)

‘I’m asking you to marry me, you little fool!’ is a sentence that sounds breathlessly romantic if you read it at 14: it sounds over-rude when you’re 25 - but at my age I think it is perfectly justified by the context, and shows Max in a nice light. He has many questionable moments in the book, but actually this isn’t one of them.

The clothes are always important: Rebecca is meant to have natural style, with her beautiful expensive garments, but also able to wear slacks and a shirt to go sailing or riding. The new bride hadn't ever had the opportunity to think about these things, and  ‘wrote quickly to a shop in London and asked for a catalogue of under-linen’. She doesn’t place an order, though she does imagine her underclothes as a subject of discussion in the servants’ hall. In her own way, the new bride is as strange as anyone else in this book. 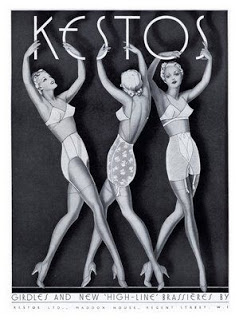 Scenes like the one above, so strange and disturbing and disconcerting, are proof of what a phenomenal writer Daphne du Maurier was – and surely under-rated (like so many others) because of her gender, seen as a woman’s writer.

But this book is her line in the sand. That chilling opening chapter, which is all atmosphere until you get to the final chapter, and have to come back to read it again to understand what was happening. The ghosts of place at the beginning, and the ending which is so abrupt, surprising even when you have read it many times. And I will certainly be reading it again. Truly a book for the ages.

Top picture is from Kristine’s photostream.

The woman at her dressing table is by Frederick Frieseke