Friday Fright Night: The Ghost that Never Was… 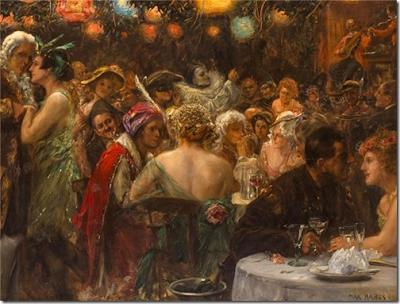 The fancy dress ball from hell....

Some of the crime bloggers are doing a Friday Fright Night meme for October – masterminded by Curt Evans at The Passing Tramp, and with great work by Kate Jackson at Cross-Examining Crime, and thanks to Bev for the logo.

My previous posts are: 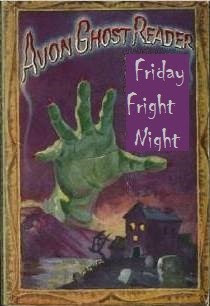 first published 1938, and never out of print since. It is being much discussed right now because of the latest adaptation of it.

Rebecca is famously a book named for someone who never appears, narrated by a heroine whose name we never discover. I’d like to add to that: it’s a ghost story with no ghosts…

‘I feel her everywhere. You do too, don’t you?’

It tells the story of a young woman with no family and no money: this is the 1930s. Working as a companion in Monte Carlo, she meets Max de Winter: a rich, sophisticated and mysterious man, widowed less than a year before. He was married to the glamorous and beautiful Rebecca, and lived with her in his beloved family house, Manderley.

He and the heroine get to know each other, and then he suddenly proposes, and takes her back to live in Cornwall. She is shy, young, unsophisticated, unused to money. She feels she cannot live up to the world of the dead Rebecca – she cannot manage the house and the servants, she fears Max is still in love with Rebecca.

Not helping, there is also Mrs Danvers - the housekeeper who knew and loved Rebecca her whole life, and makes it clear that the new Mrs de Winter isn’t a patch…

(Mrs Danvers is one of the great characters of literature, and also an absolute gift for any actress lucky enough to play her: in the latest version, Kristin Scott Thomas blasts everyone else off the set - some kind of miracle in red lipstick.)

Everything is seen through the new Mrs de Winter’s eyes, and she… is haunted. She is obsessed with Rebecca, she feels that Rebecca is still there and won’t leave her alone. She constantly imagines what Rebecca would have done, how she would have reacted, she builds scenarios in her head. There is a bizarre scene where she imagines herself/Rebecca receiving a message at the dinnertable. She thinks of her responses, and then her husband suddenly asks her what she is doing: he describes her motions, her facial expressions, her grimaces. It is a chilling moment. She is possessed.

I have read the book many times, and seen several TV and film versions of it – including the Oscar-winning Alfred Hitchcock film of 1940, with Laurence Olivier and Joan Fontaine. The most recent one came out on Netflix in the past month, so obviously I watched that too. It has been much criticized, and indeed it very much lacks nuance and tries in a rather crass way to make the new bride much more of a modern, contemporary woman. But the clothes and the settings are beautiful, and if you don’t expect a faithful rendition of the book, you may still find much to enjoy – I did. But NO version of the book is ever complex enough: People compare the current version with the Hitchcock, but the 1940 version (while a great movie) made enormous changes from the book. I understand why they had to do that, but I still think it is NOT Rebecca as DduM wrote it, and does not quite merit all the praised heaped on it. 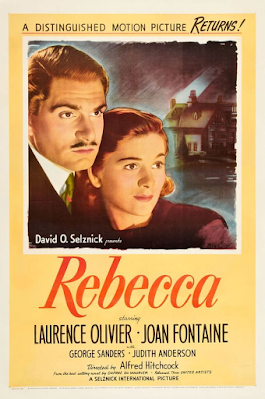 Anyway, all this sent me to re-read the book, and what a masterpiece it is. I was enthralled all over again. In fact with something as familiar as this it is hard to remember how brilliant the plot is, so perfect, so well-clued, so impossible to guess at first reading. And then the character of the bride is so intriguing, and her travails and sorrows as she starts her married life – the broken ornament, Rebecca’s belongings and even her writing, the fear of Mrs Danvers. The extraordinary fevered scene where Mrs D shows off Rebecca’s clothes. And – of all things – the scene at the fancy dress ball: no young woman can read it and not imagine herself in the unlucky shoes of Mrs de W…. Max behaves appallingly. (Top picture: The Costume Ball by Max Freidrich Rabes)

In lesser hands this would have been a makeover story: Mrs de W would have improved her clothes and her looks, and made a stand with the servants, won the love of Max. And there IS a moment where it seems she will do that. But her future is a lot more complicated than anyone could expect…

So there’s a young girl’s romantic (or is it?) story, an intricate crime plot, and (easily forgotten) a lot of hilarious social satire – the de Winters’ attitude to guests is worthy of Uncle Matthew in the Nancy Mitford books, and there are many witty asides, I was surprised at how often I laughed while reading. For example, everyone latches on to the fact that the new bride ‘does sketching’ and suddenly she is an art expert, and every visitor conversation and discussion comes round to this supposed skill and interest. It’s recognizable and funny. The character of Frank, the kinds of things he says, is very clever – he is minor and unimportant, but we can all imagine him, he is well-realized. Even Max is nicer than you remember.

‘He knows she sees him, he knows she comes by night and watches him. And she doesn’t come kindly.’

Does the ghost of Rebecca win in the end? – to some extent.

And is it a ghost story?