Between the Acts by Virginia Woolf 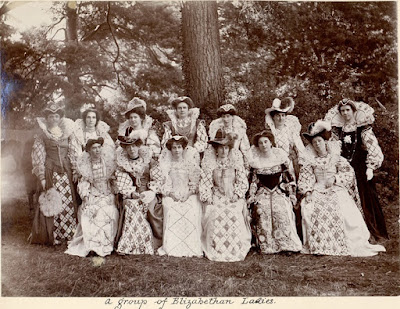 The clothes were strewn on the grass. Cardboard crowns, swords made of silver paper, turbans that were sixpenny dish cloths, lay on the grass or were flung on the bushes. There were pools of red and purple in the shade; flashes of silver in the sun. The dresses attracted the butterflies. Red and silver, blue and yellow gave off warmth and sweetness. Red Admirals gluttonously absorbed richness from dish cloths, cabbage whites drank icy coolness from silver paper. Flitting, tasting, returning, they sampled the colours….

From behind the bushes issued Queen Elizabeth—Eliza Clark, licensed to sell tobacco. Could she be Mrs. Clark of the village shop? She was splendidly made up. Her head, pearl-hung, rose from a vast ruff. Shiny satins draped her. Sixpenny brooches glared like cats’ eyes and tigers’ eyes; pearls looked down; her cape was made of cloth of silver—in fact swabs used to scour saucepans. She looked the age in person. And when she mounted the soap box in the centre, representing perhaps a rock in the ocean, her size made her appear gigantic. She could reach a flitch of bacon or haul a tub of oil with one sweep of her arm in the shop. For a moment she stood there, eminent, dominant, on the soap box with the blue and sailing clouds behind her. The breeze had risen.

The Queen of this great land 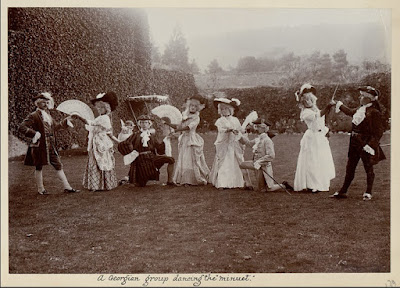 comments: This was Virginia Woolf’s last book: by the time it was published she had taken her own life.

You don’t have to know that to get a sense of foreboding from the text: it is set on a summer’s day in 1939, a village in England, and everyone there knows that times are changing. The war is coming, and the old way of life is going. In a piece of heavy-handed symbolism, the rector is making a speech and he is drowned out by aeroplanes flying above. All the action revolves around a traditional pageant, one that is held every year in the grounds of the big house. The audience and actors are introduced in some detail, and the whole of the pageant takes place. Then there is some revisiting of the key characters, going over the day in their heads.

I read it because of the reference in it to Charlotte M Yonge’s The Daisy Chain – posts on here recently. One of the scenes in Between the Acts has a proposal of marriage, and, I said, 'as Charlotte Mitchell points out, this is so very much like a similar scene in The Daisy Chain as to preclude coincidence: Woolf must surely have had the Yonge book in mind. Fascinated by this idea, I read the two scenes side by side, and you would have to say that Woolf was parodying or mocking the Yonge – I don’t think you would say it was an hommage.' [See the post for the full reference]

I love Woolf, and on the blog I have featured To the Lighthouse (albeit with some criticism of the household arrangements) and Orlando and The Years. The boeuf en daube in To the Lighthouse was a big feature of a Guardian piece I did about food in books. And Virginia’s lover Vita Sackville-West is someone I have grave doubts about, but apparently cannot stop featuring on the blog. (I recently watched Vita and Virginia, a 2018 film about the relationship between them, and although it didn’t quite hit the heights, Elizabeth Debicki did an astonishing job of portraying Virginia, totally convincing.) 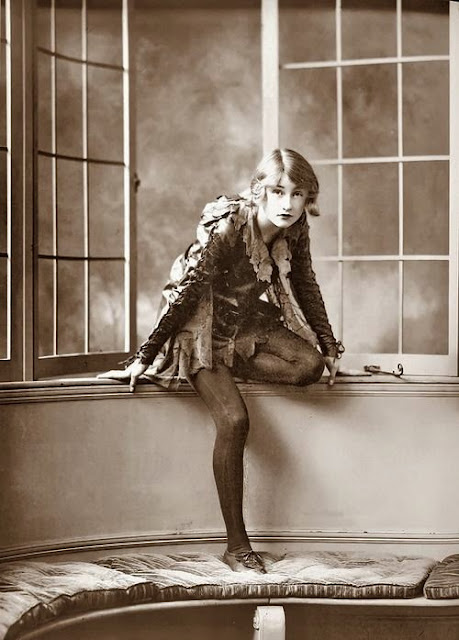 Back to the book, and truly this is not Woolf’s finest hour, I could understand why I had no clear memory of reading it 20+ years ago. She may well have made changes to it if she had lived.

The long descriptions of the sections of the pageant are stupefyingly dull, far too long, and everything else seems far too blatantly pointed ‘look what I’m saying about the past and the future’. And about class consciousness and the importance of servants.

But there were some lovely bits – I liked the top description of the costumes and props, and the final lines of the book were strangely memorable:

But first they must fight, as the dog fox fights with the vixen, in the heart of darkness, in the fields of night. Isa let her sewing drop. The great hooded chairs had become enormous. And Giles too. And Isa too against the window. The window was all sky without colour. The house had lost its shelter. It was night before roads were made, or houses. It was the night that dwellers in caves had watched from some high place among rocks. Then the curtain rose. They spoke.

And I do always like a pageant in a book: the picture opportunities are so splendid. I will always take the opportunity to feature pictures from one of my all-time favourite resources: an album on Flickr Creative Commons of the Builth Wells Historical Pageant in 1909. Featured many times on the blog…

So – there's your Elizabethan ladies.

They remind me of a lovely story about EF Benson’s Mapp and Lucia books, which also feature a pageant. When they were televised in the 1980s I remember reading an interview with the costume designer who said that they had gone round jumble sales buying up old curtains, and had made the Elizabethan robes out of them, as that is what would have been used back in the day…

And the Georgian group stands in for the Renaissance comedy:

Out they came from the bushes—men in flowered waistcoats, white waistcoats and buckled shoes; women wearing brocades tucked up, hooped and draped; glass stars, blue ribands and imitation pearls made them look the very image of Lords and Ladies.

The astonishing picture of Violet Trefusis – another of the Vita S-W circle and key lover - climbing through a window is from the Servatius blog. It is one of the most popular pictures I have ever posted and shared, but that is not the sole reason I am featuring it again – it’s that she is dressed to take part in family theatricals, so could easily be taking part in a pageant.