Violet to Vita: The Letters of Violet Trefusis to Vita Sackville-West 1910-21

Posted by Clothes In Books on January 10, 2015
edited by Mitchell A Leaska and John Phillips 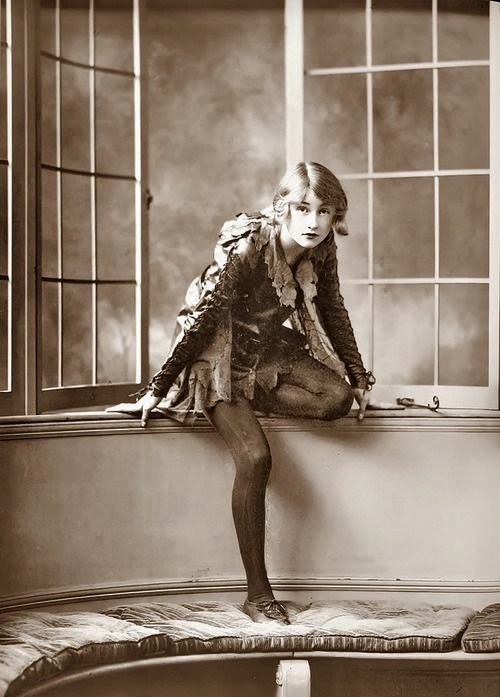 [Violet Trefusis, visiting a childhood haunt, is relaying to Vita what her thoughts were then.]

The clock has been put back 12 years: I am 14, romantic, pedantic, mystery-loving. I haven’t got over my stay in Florence… And Vita – of course it would be too wonderful if Vita came here. She is so beautiful and clever. I simply adore Vita, but I don’t know if she is really fond of me…. If only I could find out. But how? If Vita came, we would dress up and perhaps we could do Le Masque de Fer again, only I’m such a bad actress. Of course Vita’s so clever: there’s nothing she can’t do… I wonder if Vita’s mother would let her come? How wonderful it would be…

You have no idea how strange it is being here – finding everything unchanged. You must remember I haven’t been here for seven years. It’s like coming back to my lost childhood.

observations: As you might guess, the two young women had stayed at this castle together years before.

This book might mark the end of my looking at the doomed relationship of Violet Trefusis and Vita Sackville-West, which the blog has traced through their novels and some biography: Michael Holroyd’s Book of Secrets, a riveting read, did not get its own entry, but was enormously helpful. (Click on the labels for the two women below to see the many previous entries.)

Violet had good feminist views about Vita and her marriage: as Holroyd says,

She hated having to address her letters to ‘Mrs Harold Nicolson’, a conjugal label that was prematurely investing Vita with middle-aged habits. Vita had sacrificed her freedom, it seemed, for this diplomatic nonentity and was in danger of sacrificing her love for Violet whose resentment was developing into a disease that ‘will kill our love as surely and remorselessly as cancer gets its victim in the end’.

My favourite story about Vita S-W concerns her affair (Harold Nicolson describes these relationships as her ‘muddles’) with Mary Garman – one of the notorious sisters, and the wife of poet Roy Campbell. The story concerns Campbell’s complaining that Vita’s earrings were causing injuries to Mary’s thighs.

My favourite story about Violet concerns her being told by Vita’s mother the facts of life just as she was considering marriage: what sexual intercourse with a husband would involve apparently came as a huge shock.

Like Vita, Violet had a long life ahead of her: her marriage survived for ten years, till her husband’s death. She had money, she had a house in France that she loved dearly, and she produced a small number of books which are much better reads than Vita’s. But you couldn’t say she had an over-happy life.

Both women had remarkable, domineering mothers, and you would conclude that their relationships with those mothers were extremely important, and might hold the key to some of their more inexplicable actions.

The introduction to this book says that Violet’s mother Alice Keppel ‘might be a celebrated Edwardian hostess, but she had a will of iron and a heart of stone.’ The considerable reading I have done round this subject (including Vita’s book The Edwardians, which gave a Xmas entry last week) suggests that ‘but’ has no place in that sentence, and should be replaced by ‘therefore’.

This astonishing picture of Violet Trefusis climbing through a window is from the Servatius blog.