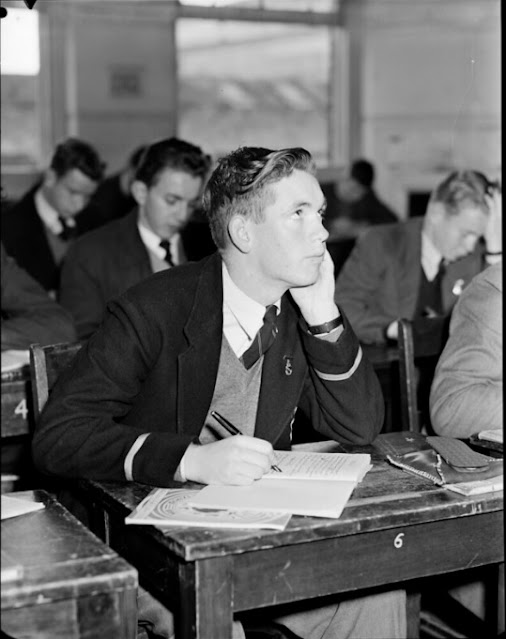 There are two very sad things here. The first is that we should be just recovering from the Bodies from the Library conference: it had to be cancelled because of the coronavirus. I was due to take part in a discussion on Gladys Mitchell – by next year (when I hope it will still happen) I will have read even more of her books. (the event was about her earlier books, so reading this post-war one is ‘background research’.)

The second sad thing is that it is one of her better books in terms of plot, comprehensibility, and resemblance to a normal detective story. But there is far too much casual racism in it, and the references to  Jewish and black characters are close to unbearable. The book is set in a boys’ public school, and very likely the racism and bullying are very realistic for the time, but it does spoil the book.

THE REST OF THIS WILL BE SLIGHTLY SPOILERESQUE – the identity of the victim is revealed in the blurb, so that seems fair enough. I will be describing some aspects of the plot as it goes along, but I will not be spoilering the solution. (As ever, my view is that my post would only be  at all spoiler-esque  if you were in the middle of reading it, in which case leave this and look at it later…)

Interestingly, there is some slight nuance: the master who is murdered is first introduced as quite rude and impatient, but with some room to manoeuvre. Perhaps he is a breath of fresh air? Perhaps he has call to be sharp with annoying people? But he is slowly revealed to be absolutely vile, and also to have been imprisoned during WW2 for his fascist, pro-Nazi views. He is an 18B man – arrested under special regulations as a danger to the war effort. (For more on these real-life events, Diana Mitford’s story is always educational, see blogpost here.)  So the Jewish boy, Issachar, says mildly that he didn’t get on with this man, because he was so very pro-Hitler. It is all very uncomfortable.

I thought this might make a nice back-to-school post to go with my recent look at uniform panics. But I cannot separate the racism out from the rest of the book (and this is not a function of recent events – this would have been true any time I read it).

I think the problem is this: Gladys Mitchell clearly has no time for racism and fascism and pro-Nazi policies. All right and proper. But, she cannot see any connection between those views, and her ‘good-natured’ casual jokes and racial slurs. In 21st Century eyes, these items are on the same spectrum – a view that I think would have been dismissed by many people back then. And I know that you could say that the book should be judged by the standards of the time – I have occasionally and half-heartedly used that argument myself about Golden Age detective stories. But the attitudes in this one are pervasive and make for difficult reading. And ‘attitudes of the time’ – in this particular case I cannot imagine a Jewish or black person reading this book in 1947 and not being horrified (though possibly unsurprised). Objections to racism were not invented this century, and it is insulting to imply that they were.

So what else can I say? The boys’ school presented is, I think, meant to be reasonably bearable, and sounds as though it was appalling. It is a continuing mystery why wealthy upmarket British people thought it was right to send their sons (particularly) to places like this fictional Spey College. Rather like US High Schools, those who survived them do not spend much time trying to tell the rest of us that ‘oh no it wasn’t really like those films or books, that was a wild exaggeration.’ Boys' public [ie posh, private] schools were obviously hotbeds of violence, thuggery, bullying, corporal punishment, squalour and general misery. As well as racism and snobbery.

Mitchell does always do her best to shock in an entertaining way. The headmaster here says the only alternative to employing the horrible master was ‘a young woman. I wish now I had plumped for the girl. At least she wouldn’t have been murdered, although I think she might have committed suicide after a bit.’ The author probably thought this was a more shocking line than the racism.

I was discussing with someone whether ‘Balliol college’ adds anything to a description of someone’s education (see this blogpost here) – my view, factual and not at all approving, is that it does: I said ‘it really did have a rep for the brightest, the poshest and the most Classical’ – of the men of course. (And that is why its most famous alumnus is Lord Peter Wimsey – see this blogpost, and the label below for myriad appearances by him on the blog).  And here in Tom Brown’s Body it is used as shorthand: ‘Oh Micklethwaite! He’ll get a Balliol. Everybody thinks so.’ [Meaning, he’ll get an academic scholarship to Balliol College within the University of Oxford.]

Series sleuth Mrs Bradley turns up to look into the crime, and takes forever – allowing us to view the rhythm of school life over several seasons, and the detail is actually quite compelling. The school has a Roman Baths, a nice touch: could someone be drowned there we wonder? Everyone behaves in wholly unrealistic ways in relation to the crime – some authors may have been moving to more realism at this date, but that was never Mitchell’s selling-point, and absolutely everyone is implicated, under suspicion, covering up, or involved in some sideline that confuses matters.

I never expect pools of clarity in Mitchell’s books, and I would be hard put to explain the plots of most of them even when I have just finished them. There are always questions left at the end…

But I have enjoyed many of her books very much, and you can find posts on them via the label below. But I can only recommend this one if you want to get a picture of casual racism  of its era.

The picture, of schoolboys in the 1950s, is from the New South Wales archives.