Armistice Day: Achilles in the Trench

To mark the 100th anniversary of the end of the First Word War, my daughter Barbara Speed and I are doing a joint post – here on my blog and on her poetry newsletter, Lunch Poem. (Details at the end of the post) 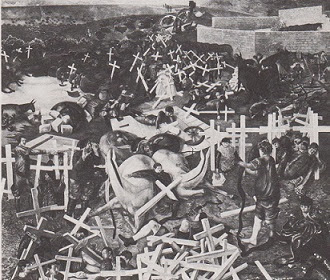 I saw a man this morning

(sometimes known as Achilles in the Trench)

I saw a man this morning
Who did not wish to die
I ask, and cannot answer,
If otherwise wish I.

Fair broke the day this morning
Against the Dardanelles;
The breeze blew soft, the morn's cheeks
Were cold as cold sea-shells.

But other shells are waiting
Across the Aegean sea,
Shrapnel and high explosive,
Shells and hells for me.

O hell of ships and cities,
Hell of men like me,
Fatal second Helen,
Why must I follow thee?

Achilles came to Troyland
And I to Chersonese:
He turned from wrath to battle,
And I from three days' peace.

Was it so hard, Achilles,
So very hard to die?
Thou knewest and I know not—
So much the happier I.

I will go back this morning
From Imbros over the sea;
Stand in the trench, Achilles,
Flame-capped, and shout for me.


commentary: Patrick Shaw-Stewart died in the First World War in 1917 at the age of 29. He stands for all the classically-educated young men, public school officers, who must have thought war would be much more like Homer and less like Gallipoli.

He was a brilliant scholar -  educated at Eton and then Balliol College Oxford - and spoke Ancient Greek to the locals when deployed in Greece. He was present at Rupert Brooke’s funeral. This poem was found after his death, written on the endpapers of his copy of AE Housman’s A Shropshire Lad. (You couldn’t make it up). 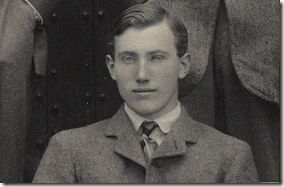 George Orwell (in a piece about Rudyard Kipling) writes persuasively about a point at which the world changed: by 1942 there could be no belief that having right on your side was enough in a battle, and so being part of the forces for good did not give you an edge over your enemy. Talking of the ‘post-Hitler mind’, Orwell says:

No-one, in our time, believes in any sanction greater than military power; no-one believes it is possible to overcome force except by greater force.


Patrick Shaw-Stewart was surely part of the earlier generation, still with the belief that, at the very least, the gods punish hubris. The classical references in his poem are carefully worked out, and the question he asks – well isn’t it obvious what the answer would be to modern eyes? Of course he should not want to die, even in a good cause.

The final lines of this poem refer to Achilles’s response to the death of Patroclus:

Stand in the trench, Achilles,
Flame-capped, and shout for me


For me this couplet is one of the abiding images of the First World War, one of the saddest and most memorable. When I first read the poem, many many years ago, I thought he was asking Achilles for encouragement, asking to be cheered on. But he is not. In Homer’s Iliad (Book 18), Achilles’ great love, Patroclus, has been killed by the Trojans. Achilles is devastated (this is my own translation from the Ancient Greek):

Fire wreathed round Achilles’ head, like that round burning ships, rising up towards Heaven. He came from the wall to the trench, and stood there and shouted: he cried aloud like a war trumpet, and the Trojans were dumbfounded and thunderstruck. The flames capped his head, and three times he roared and shouted, and three times the Trojans fell back in chaos, overwhelmed.


Patrick Shaw-Stewart is asking for someone to mourn him, someone to care passionately if he dies.

A hundred years later that is the least, and the most, that we can do for him and for all the other lost dreams, and futures, and lives of the First World War.

The top picture is The Resurrection of the Soldiers by Stanley Spencer.

I recently read a most wonderful novel about the First World War, and the toll it took particularly on the young, and strongly recommend it. It is The Skylark War, by my friend Hilary McKay.

This post also appeared in the Lunch Poem newsletter run by Barbara Speed: you can see it here.

Subscribers to the newsletter are sent a poem every couple of weeks, along with a commentary on it. Just right -  not too demanding and a delight to be sent something beautiful, usually at lunchtime. You can sign up for the newsletter here .
Achilles Armistice Day Barbara Speed George Orwell I saw a man this morning Patrick Shaw Stewart poem Rudyard Kipling WW1