Just So Stories by Rudyard Kipling

Posted by Clothes In Books on December 13, 2013
story: How the First Letter was Written 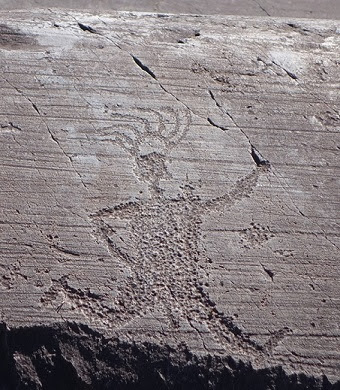 [Taffy is sending a message via a stranger]

'Look,' said Taffy, drawing very hard and rather scratchily, 'now I've drawn you, and I've put the spear that Daddy wants into your hand, just to remind you that you're to bring it. Isn't it a beautiful picture? And do you quite understand, or shall I 'splain again?'….

[the stranger hands over the picture to Taffy’s mother]

As soon as Teshumai saw the picture she screamed like anything and flew at the Stranger-man. The other Neolithic ladies at once knocked him down and sat on him in a long line of six, while Teshumai pulled his hair.

'It's as plain as the nose on this Stranger-man's face,' she said. 'He has stuck my Tegumai all full of spears, and frightened poor Taffy so that her hair stands all on end; and not content with that, he brings me a horrid picture of how it was done. Look!' She showed the picture to all the Neolithic ladies sitting patiently on the Stranger-man. 'Here is my Tegumai with his arm broken; here is a spear sticking into his back; here is a man with a spear ready to throw; here is another man throwing a spear from a Cave, and here are a whole pack of people' (they were Taffy's beavers really, but they did look rather like people) 'coming up behind Tegumai. Isn't it shocking!'

observations: My good friend JS, long a friend to this blog both as a reader and as super-consultant in matters of translation, sent me this picture, which had reminded her of the Just So story above… in which a little girl tries to invent writing, and letters, in order to get an important message back home. As can be guessed from the extract above, this is not going to go smoothly. Kipling concludes:


But from that day to this (and I suppose it is all Taffy's fault), very few little girls have ever liked learning to read or write. Most of them prefer to draw pictures and play about with their Daddies--just like Taffy.

JS took the photo of the running man on a recent visit to the Val Camonica in Italy near the border with Switzerland – the area is famous for its rock drawings, the earliest of which date from 8000 years BCE. She says they are

quite fun. Lots of erudite explanations, but which left you with a strong feeling that they Don't Know - and not surprising, because most were pre-Roman. Stick men holding huge spears, or with their arms in the air so they could be dancing, praying, limbering up, or goodness knows what.

The Just So Stories are also quite fun. There is another one about Taffy and her father, ‘How the Alphabet was made’ – not nearly so good as this one - but most of them are about the origins of animals: ‘How the Leopard got his spots’ and ‘The Elephant’s Child’ (aka How the Elephant got its Trunk). JS says

I actually went to see the great green greasy Limpopo when I was in Botswana many years ago - but it was not much more than a trickle, and not a crocodile or an elephant child to be seen.

Kipling’s own illustrations for the book are lovely. This one – for the Cat That Walked by Himself –made a deep impression on me when I was a child. 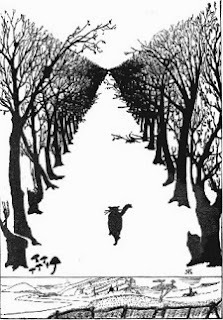