More Impersonation…is ANYONE who they say they are?

I recently did a post on impersonation in books, and it obviously resonated with other people who felt the same way I did - that they are very hard to believe in, but magically compelling and entrancing.

So there were some recommendations and reminders…

A lot of the Agatha Christie impersonations can’t be discussed in detail, because spoiler, but there was a reminder of the early short story Jane in Search of A Job

Jane in Search of a Job by Agatha Christie (clothesinbooks.blogspot.com)

-Where I discuss AC’s attitude to impersonation, but also take a shallow look at research on recognition abilities. Maybe impersonation is easier than we think….? 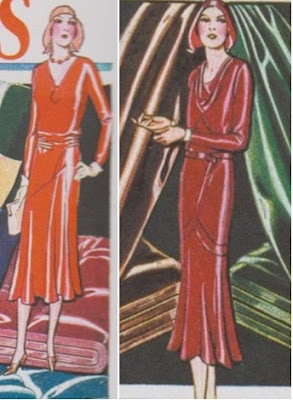 One of my readers pointed out the PG Wodehouse was a master of the impersonation plot, which is certainly true. There is another way of categorizing impersonations, which I didn’t spell out in my original post:

There are the impersonations which happen because two people who are strikingly similar in appearance to each other – so one can be ‘mistaken’ for the other. And there are impersonations where the appearance of the impersonee is not known – ie anyone of roughly the right age and gender could pretend to be that person – this would normally be the PGW plot.

Then there were a couple of recommendations that I rushed off to read.

Blogfriend Shay revealed that she reads (as well as every other book ever written, including all books that I have read) Westerns of the early 20th century, and recommended one called

from 1922 This involves a man pretending to be a long-lost brother of a young woman running a ranch. He steps in to help her fight off some villains and keep the ranch going. But he is falling love with his supposed ‘sister’ (I’ve only just realized – a plotline in common with Brat Farrar). Shay says the trope is not uncommon in this genre of books. Perhaps the Wild West is a place where people disappear and reappear and can’t be checked up on. Anyway I enjoyed this book as a fine change from my normal reading. I wouldn’t like to examine the moral framework of the book, why certain actions are good and others bad, and why (always a question with Westerns) the good guys can’t just shoot the bad guys and have done with it? It’s what they do in the end, why not cut the whole thing short? But it IS a very good impersonation plot, with one genuine and satisfying surprise along the way. You can find the book in the Gutenberg Library.  I started by making notes of things I had my doubts about, but stopped: this book was beyond criticism. I think it is the first traditional Western book I have blogged on. 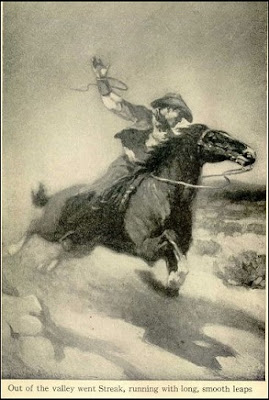 illo from the book - did Eadweard Muybridge strive in vain?

from 1976. I’m a big fan of ELK, (this post on her book The Mixed up Files… has a photo of two other fans) but hadn’t come across this one, and it was a real treat. It is a very interesting and unusual book, with a strong impersonation plot, and some very unexpected features – I can’t say too much beyond the basics of the plot. It is set mostly in the early 1950s: a teenage boy called Winston lives in a big mansion in Pittsburgh, with his very rich parents and his little sister, and is definitely a Poor Little Rich Boy. A woman turns up who claims to be Caroline, a lost daughter of the house. She has a huge effect on everyone in the family, and you slowly come to realizations about the various characters. It is a clever and affecting plot.

The reason Caroline was ‘long-lost’ was because she was kidnapped 16 years ago, and was assumed to have died with her kidnappers in a shootout. This same plot features in a 2000 book by Laura Wilson called Dying Voices which isn’t about impersonation as such, but is about finding out that an abducted, and long-assumed dead, woman turns out not to be dead. So where has she been hiding, and why? Both stories would remind the reader of the real-life story of Patty Hearst. (Neither of the two fiction books resembles each other, or the real-life tale… )

The younger sister in My Father’s Daughter is called Heidi. The children’s book of that name was a great favourite of mine, and is one of the books I read to the Third Grade as a busybody school Mom. The children wrote me a thank you card at the end of term, and one of them said ‘thank you for reading us Hidey’, which was charming, and there is a touch of the second meaning in the use of the name here.

There is also the trope I mentioned in my original impersonation post: that teachers are supposed to be able to tell if this really is the child they taught.

There is an excellent Thanksgiving scene, which is also short – ELK is very quick and efficient in her storytelling. (Thanksgiving pic from Library of Congress) 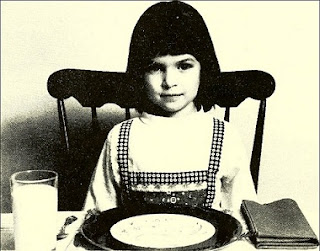 And some beautifully-written sentences:

Outside the front entrance to our house were two boxwood trees that Solomon, our gardener, kept carefully groomed into pompons. In the spring of the year bright green sprigs kept popping out, destroying their perfectly round margins. Father looked like that; he was sprouting bright green sprigs of joy.

The old lady looked down at her fingers and said, “My hands look like they have been assembled out of miscellaneous parts by a mad plumber.”

I have only one complaint: I read this book on Kindle, and would like to say that it was one of the most badly-formatted books I have ever paid money for. It is just AWFUL, so much so that at first I wondered if it was meant to be full of mistakes to show something about Winston the 1st person narrator.

There are many other suggestions in the comments on the original post, including several Georgette Heyers, and Mark Twain’s The Prince and the Pauper – with a production of the play in Antonia Forest’s Autumn Term, and there’s more twin swapping in her End of Termv. (Mark Twain was obviously fascinated by swaps, because he also wrote Puddnhead Wilson, about babies exchanged at birth).

And I did subsequent posts on Mary Stewart’s The Ivy Tree, Julian Symons’ The Belting Inheritance, and Patricia Wentworth’s The Traveller Returns.