The Dior Dress (& others): The Golden Rule Part 2 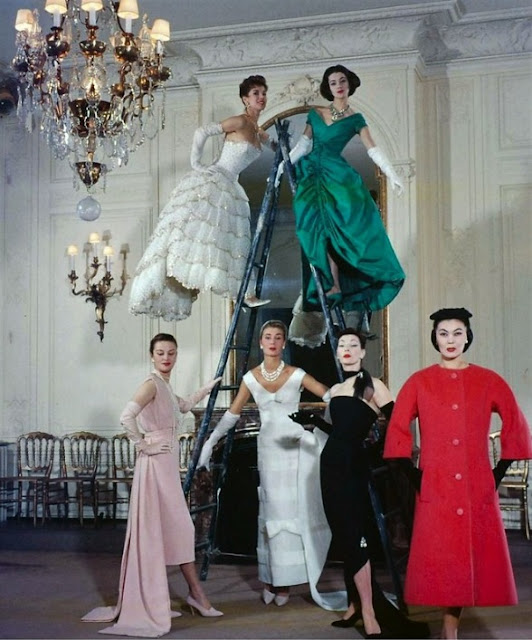 Thursday’s post was about Amanda Craig’s wonderful The Golden Rule – but one part of the book needs its own entry, and that is the spectacular party dress the heroine gets to wear. 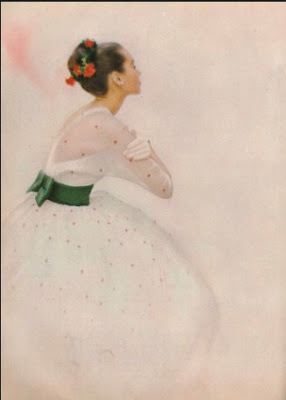 In fact Amanda and I had discussed this before the book was published – agreeing how we loved a book in which there was an iconic dress, a big clothes moment. Think: Daphne du Maurier’s Rebecca, the ‘shared’ Schiaparelli dress in Muriel Spark’s The Girls of Slender Means, the green dress in Ian McEwan’s Atonement, the velvet audition dress in Noel Streatfeild’s Ballet Shoes, bought with ‘pawned’ jewellery. It’s such a great item in a book – we worry that they don’t feature so much in modern books. 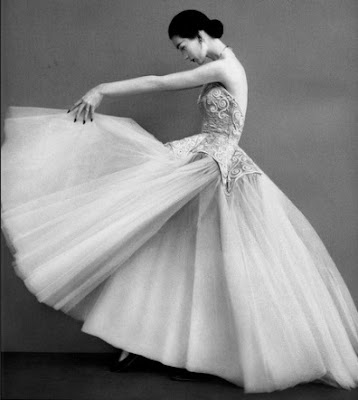 So Amanda is helping to show the way, with the heroine of The Golden Rule getting to wear a ‘vintage couture’ party dress by Dior:

‘Layer upon layer of gauzy knee length petticoats belled out from a tiny bodice with a boat neck, made of almost transparent cream silk. The top layer was embroidered in a pattern of intertwining red rosebuds and pale green leaves, each stitch so minute that they could hardly be seen.’

When her daughter sees her in it, she is open-mouthed and says

‘Are you going on Strictly?’

In fact it’s for a special party – though where dress and wearer end up is very worrying for those of us who are concerned about the heroine AND important textiles. 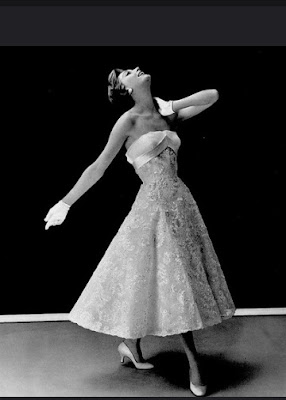 The dress in the book is by Dior, described here as ‘the only designer ever to love and understand women’s bodies as they were, to see their curves as flowers needing petals.’ There’s been a lot of Dior on the blog… particularly recommend this post on Mrs ‘Arris goes to Paris (about to be republished I gather) with lots of Dior illos (including the one above) that might make you think of the description here.

And then I had the joy of finding a couple more dresses (on Kristine’s photostream) that I thought might fit.

The top picture shows top items from the Dior 1957 collection.

After that I decided to give some other designers a go: