Podcast, Spoilers, Christie and us – no 4: Cards on the Table 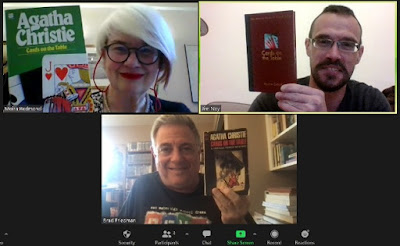 We are making stately progress. JJ from Invisible Event masterminds, Brad Friedman from Ah Sweet Mystery and I read the book and turn up, and together the three of us are looking at Agatha Christie’s works, one book at a time, in spoiler-heavy detail. And this time we are doing Cards on the Table from 1936.

You can find the latest Spoiler Warning podcast

over on Invisible Event here

or wherever you get your podcasts (people always say that, so I assume it’s true).

There is conflict and excitement (in podcast or book? you judge) and we discuss the plot in detail - the spoiler clue is in the name.

Why would a crime story with few suspects and depending largely on a card game be so good? Two of us think so, and one doesn’t…

And if you’ve ever idly wondered about the game of bridge, and its relevance to the Cards on the Table, we have an explanation of the game and how it affects the plot of the book.

More? A discussion of the TV adaptation, and also such Clothes in Books/Christie favourites as silk stockings, lounging pyjamas, and hat paint as a means of death.

And the obligatory clothes details: Anne wears embroidered crepe de chine pyjamas – so this is not quite, but it is Louise Brooks in 1929, so no further defence needed (and a sly look that suits…). 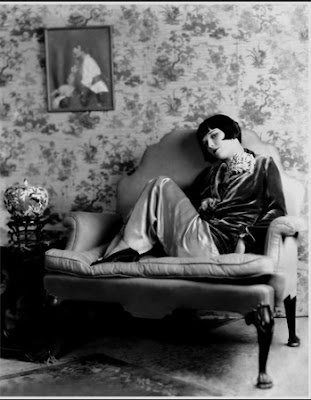 Meanwhile Rhoda is wearing an orange cretonne dress, and this is unusual, because cretonne is basically a furnishing fabric, heavy cotton used for curtains, cushions and chair coverings. Of course anything can be used to make clothes (think Scarlett O’Hara and the curtains) – and there is a cretonne beach robe in this blog entry on a 1940s book – but 1930s fashions tend to be silky and flowing rather than stiff and unyielding as cretonne would be. And this is for informal daytime wear. Linen would be more likely.

Also, Ariadne Oliver (Agatha Christie’s alter ego character in the book) wears ‘one of the new horsy hats’, as opposed to her country hat earlier in the book, and I haven’t really been able to find out if that was a thing. I found one reference to horsey hats, but that was in 1909, and they were for men. They don’t seem to exist outside this book. Lucy Fisher may know… There was a similar problem with the ‘new collegian hats’ in my post on Death in the Clouds – was Agatha just good at making up millinery taglines?

Enjoy the podcast, and you can get ahead for the next one: it will be on that great favourite A Murder is Announced.