The Postscript Murders by Elly Griffiths 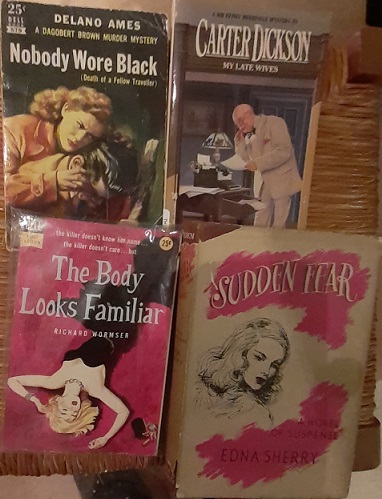 Benedict goes to a charity shop… ‘Books should be arranged by size or author or genre, not just because the woman on the front is wearing a red dress.’

I love all Elly Griffiths’ books, but have always had a special place in my heart for the Ruth Galloway series (much featured on the blog). They were safe in their place at the top of the pyramid of EG’s works. But is there a competitor?

IN 2018 I really enjoyed The Stranger Diaries, a fabulously intricate gothic-y thriller with an old Victorian building, an old Victorian author and an old Victorian ghost story (lovingly created for the book) and some very modern crimes - and a new policewoman, Harbinder Kaur. It was excellent and so I was really pleased when I heard that EG was featuring her in another book. And this one, The Postscript Murders is an absolute triumph, for several reasons, some of them personal to me.

Subjects close to my heart include crime stories, authors, the Catholic church, maths, book events of various kinds, and Cold War history. All of them feature in this book, from lighting candles in church to calling people kulaks (I thought it was only us did that!).

Also, The Postscript Murders made me laugh out loud, it is witty and hilarious. But, I should make it clear, this is not some satire on the book industry, nor is it a comic caper (I like funny books, I like crime stories, but on the whole I HATE anything that combines the two in a way in which humour, slapstick and ludicrous situations take over from proper detection). EG treads a careful line – the book events, the signing, the literary festival are all very funny and recognizable, but they are not (on the whole) ridiculous or exaggerated for comedic effect. This is a genuine crime story with some chilling moments, and once I got into the final third I couldn't put it down, desperate to know what was going to happen.

The book starts with the death of Peggy Smith, an old lady in a retirement block of flats in a small south coast resort. She turns out to have had an enormous interest in crime fiction, and to have business cards saying ‘Murder Consultant’: the subtitle of the book is ‘They couldn’t do death without her’. It’s not clear (yet) whether she has been murdered, but there are some funny goings-on at the funeral and afterwards. I defy anyone to get that far and not to want to find out what is going on – it’s a superb setup. 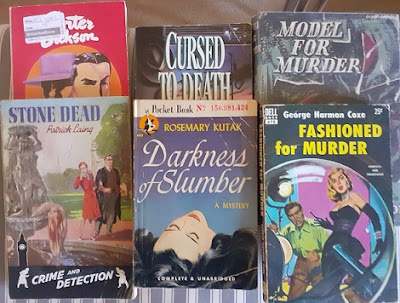 EG’s books have fantastic lead characters, but she also does group dynamics very well, the relations between her characters are always full of joy and interest and tension, and here she has excelled herself. We have Harbinder and her colleagues – Harbinder starts as she means to go on, inviting someone into ‘my office’, when it is actually her boss’s, but then regretting it ‘when she sees how untidy it is. Also, Donna has got one of those awful cutesy calendars with babies in flowerpots.’

But in parallel we have Natalka (Harbinder’s visitor), and her companions Benedict and Edwin, all friends of the dead woman, an ill-assorted trio who want to find out what happened to Peggy.

And this is where the story really takes off in a way close to my heart – because there is obviously a connection with old crime books, new crime books, Golden age authors, modern day authors. They have to look up authors, find books, make lists. 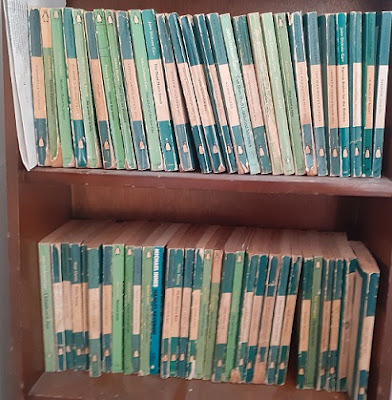 Well. It’s the dream, innit? Me and my blogging friends would be SO GOOD at that: the prospect is dizzying. If only someone would require us to solve a crime through our knowledge of crime books… **** see also below.

There are more deaths, and the investigation moves to Aberdeen in Scotland, where a literary festival is taking place. Natalka, Benedict and Edwin – ‘a glamorous woman, an awkward bespectacled man and an elderly gentleman in a cravat’– embark on a road trip to get there.

They play Who Am I?, which lasts until the M25. It’s not a complete success. Benedict’s choices are too obscure and religious (St Therese of Lisieux, Thomas Cranmer, Padre Pio), Edwin’s too old-fashioned (Marlene Dietrich, James Mason, Jacqueline du Pre) and Natalka’s too modern (Dua Lipa, Stormzy, Jameela Jamil).

The jokes come thick and fast, but so does the tension, and the scenes in a windswept house on the Scottish coast are particularly scary, and slightly reminiscent of one of my all-time favourite crime books, Christianna Brand’s Green for Danger: a group of disparate people are almost quarantined together for their safety, but then where exactly does the danger lie – within or without? There are twists and turns right up to the last pages – the book has some very varied plotlines, in a good way.

I sighed with delight at the end of it. More please, of Harbinder, but also of the others...

This book was joy from start to finish.

Pictures show my own collection – I bet I have more crime books than the charity shop had, and I didn’t have to go very far into my house to get these tiny samples.

****I was busy casting some of my crime-book-blogger friends in different crime-solving roles in The Postscript Murders, and there were two particularly strong candidates.

In a post on last year’s Bodies from the Library conference, I wrote this only-slightly-imaginary dialogue between two of my friends based on a previous event:

"At the Edgar awards banquet in NY I sat between Curtis Evans of The Passing Tramp, and John Norris of Pretty Sinister Books.  They were the best ever company, but also faintly terrifying. I’m going to make up this example, but it will give you an idea what it was like. The awards would mention a book called, let’s say, Red Murder.

Curt would say ‘There was a book by that  name published in 1934. It was by James Woodentop.’
John would say ‘1935 surely?’
Curt would say ‘British edition was 34, US 35.’
John would say ‘the publisher was Wildcrime books’
Curt: ‘In the US. Tuppence books in the UK, picture of a giant bloodstain.
John: ‘The green and white Penguin can’t have been till 1945.’
Both: ‘Can’t get it now for under $100’
And so on.
No book is truly forgotten while those two are still around."