I’ve already written about some aspects of the wonderful Bodies From the Library conference last week – concentrating on (a few of) the friends, old and new, that I met up with, and some pre-events. 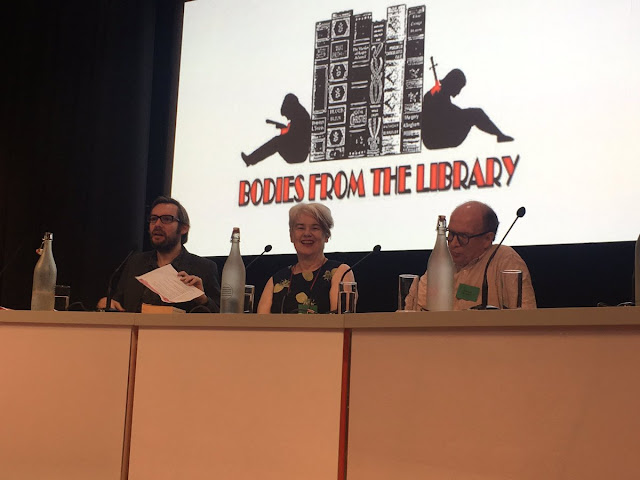 I was also lucky enough to be invited to take part in a panel called ‘Is the Golden Age Humdrum?’: this was chaired by the marvellous Jake Kerridge, crime reviewer extaordinaire, and the other participant was the legendary bookseller Richard Reynolds of Heffers in Cambridge, a man with serious crimebook credentials. (Apart from anything else, he is ultimately responsible for my friendship with Christine Poulson, as he recommended one of her books in one of the excellent booklists he produces.)

When I was asked to do the panel, I immediately knew I must go back to first principles with the Humdrums. You might think ‘Read Freeman Wills Crofts? Find out how many names John Rhode had and how many books he wrote? Try to pin down exactly who is on Julian Symons’ list, and how it changed over the years?’ But important though those things are, the real key was to talk to my friend Curtis Evans, aka The Passing Tramp, who produced a book called Masters of the Humdrum in 2012, and is the true Master of the Humdrum himself. 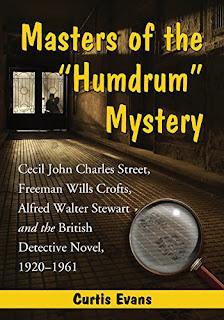 Curt is a contemporary of mine, lives in America, and has devoted his life, so far as one can tell, to rescuing forgotten authors from oblivion. I don’t know how he finds time to read everything, and talk up all the books, and do the research, and do some book-dealing, and write introductions to endless re-issues, but he does.

He is also a good friend, and a friend of this blog, and he is always incredibly generous with his time and knowledge. He edited the book Murder in the Closet, to which I contributed, and which was Edgar-nominated, making for a memorable trip to New York where I met Curtis and also John Norris of Pretty Sinister Books IRL for the first time. ***

I consulted Curt and he was most helpful. By most people’s standards, I am fairly well-informed on the crowded field of crime writers of the first half of the 20th century, but at the Bodies day, not so much.

So: Julian Symons came up with the term Humdrum (slightly arguable, but more or less) in his influential Bloody Murder, first published 1972. It’s a fascinating book, and he was very knowledgeable, and wrote entertainingly and well. But he was extremely opinionated – that’s part of what made him fun – and strong opinions tend not to be that balanced. He had a theory about the difference between humdrums and the more literary or stylized book, and so he stacked the book to demonstrate that.

His idea was that most of the GA writers were an ‘eccentric detour’ in the history of the crime novel. This is rather startling, I think, to most of us. In a sense he is saying that you can ignore most of it – and he also claims that modern crime writing (obviously from the period he wrote the book – 70s, and reprinted and updated in the 80s) is in a direct line from sensationalist crime fiction of the Victorian and post-Victorian era. There’s a sense in which he thinks you can miss out that whole era that we - most of the people at Bodies for sure – would think was of pivotal importance. He said the Humdrums were ‘plotted with a slide rule, written without style or savour’ and are ‘dull and now unreadable’.

As Curt says: ‘Over the years, the traces of these writers may have become obscured, like rug-covered bloodstains on the parquet flooring in a country house mystery.’ This is the very rare case in which the female side won out... most unusual. Normally we find the women written out of history, whatever contribution they made. So much the opposite here, where Agatha Christie, Dorothy L Sayers, Margery Allingham and Ngaio Marsh are the best-remembered names.

Julian Symons kept changing his list – basically he threw in writers he didn’t like (and in some cases possibly hadn’t read) and took them out if people objected enough. And in the end - we don’t have to take on board all his ideas.

A Humdrum list – and it is a given here that ‘Humdrum’ is a helpful label rather than an insult – would include: 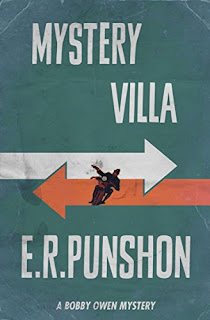 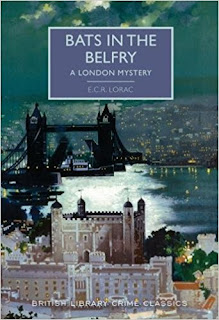 ECR Lorac was, unusually for this list, a woman

But perhaps we each have our own list, we know instinctively what we consider to be Humdrum… And the Dean St Press  and British Library Publishing are trying to bring them all back for us.

The one shoutout I would like to give to my own contribution to the panel is this. There was, and always has been, a lot of discussion of what exactly constitutes a Humdrum Golden Age book. I have come up with a rough and ready distinction: John Dickson Carr, for example, has very elaborate special tricks to explain his murders. You can imagine – and I have discussed this with others – actually trying out to see if the illusion would work. Imagine! A group of us with all the props and specialized personnel gathered (of course) at a tennis court: a person with a particular amputation, a snuffbox, a garden roller, a crossbow [and some much more spoiler-esque items]. It would make for a highly enjoyable afternoon.

And my contention is that nobody would ever bother, or be interested or excited, to do that for a Humdrum. Which doesn’t at all mean that they are bad or uninteresting books, they are very much worthwhile and rewarding. But just in a different way… which was the point of our discussion. Nobody there was dismissing them.

**** BTW, when I went to the Edgar awards banquet in NY I sat between Curt, and John Norris of Pretty Sinister Books.  They were the best ever company, but also faintly terrifying. I’m going to make up this example, but it will give you an idea what it was like. The awards would mention a book called, let’s say, Red Murder.

No book is truly forgotten while those two are still around.

And…. Some very good news is that I hear  faint whispers that Curtis Evans might be tempted over to next year’s Bodies From the Library event, which would make for a magnificent talk. Now all we have to do is get John of Pretty Sinister Books over too.

I mentioned in my previous post that we were all waiting for Brad Friedman’s report on proceedings – which would surely be One Post to Rule Them All. And it’s here! And it is.