Death of an Airman by Christopher St John Sprigg 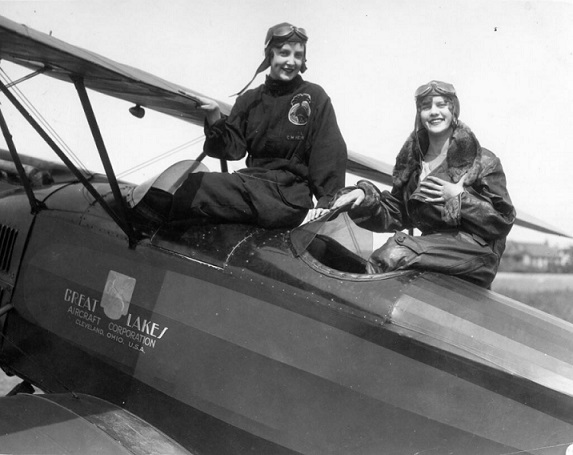 I absolutely loved a previous book by Sprigg, The Perfect Alibi, and wrote more about him and his life in the post. I liked this one too, it was very entertaining, and gave me the excuse to use these early-days-of-aviation photos from one of my favourite resources. (Come on, aren’t they fabulous?)

Death of an Airman takes place almost entirely at an air flying club, and the details of life there (which seem authentic, and would be known to Sprigg) are absolutely fascinating.

Winters was a lean man, with hair greying round the temples, and an air of gentle melancholy easily explicable by the fact that he had been a club instructor for ten years

Learning to fly was much more like learning to drive would be now – as one character says “In my young days we used to go solo in two hours. Now everyone seems to want about twelve hours. In another ten years they’ll take a fortnight.” How long does it take now? –  teaching people to fly is very big business, and (I happen to know) very profitable indeed these days.

The book starts with a new pupil arriving at the club, an Australian. Sally, the manager of the club, says:

“I hope you don’t get fighting drunk? Our last Australian smashed every glass in the place the day he went solo.”

The stranger cleared his throat deprecatingly. “I think it unlikely that I should do the same. I am the Bishop of Cootamundra.”

- he wants to fly himself around his very large diocese.

She comments that he is not dressed as she would expect: no ‘Roman collar and episcopal gaiters.’ He says he is off-duty and anyway they are less formal in Australia. None of this is really relevant, but it gives me an excuse to mention that I have (of course!) devoted attention to bishops’ wear, gaiters, and the connection with horses, in a past post.

The Bishop is witness to a plane crash and death, and an investigation follows. As everyone who has read this book points out, the very promising Bishop character disappears for most of the middle section, and only comes back at the end, which is a real shame. I felt the book sagged in the middle, with endless discussions of what might have happened and where everyone was and who was telling the truth.

Everybody in the book dresses just as you would expect flying enthusiasts of the 1930s to do.

She was wearing white overalls and a white flying helmet,

He was slim but wiry, dressed in white overalls and carrying a white helmet of rather a foppish cut. He lived up to the Inspector’s expectations of an airman, which were somewhat romantic.

[Hard to imagine what identifies a foppishly-cut helmet]

There is also one character wearing wildly camp clothes: the 1930s aesthete presumably: 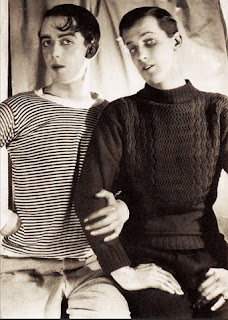 Tommy Vane was now wearing large flannel trousers which trailed on the ground and an offensive canary-yellow pullover with a bright green scarf.

It’s actually very hard to find pictures of this kind of 30s outfit for men: this is a picture of the notorious Bright Young Thing Brian Howard and friend.

There were some very funny moments:

The policemen are hot on the trail of a particular plane:

“A low-wing monoplane - Do you know enough about these noisy contraptions to recognize that?”

“I think so. I know that’s not one, anyway,” Bray answered, pointing to a bulky machine in the corner.

Looking into the background of the suspects:

“She is the daughter of a rural dean. That’s pretty bad, but not the sort of thing you can use in evidence against her.”

Unfortunately Lady Laura’s dulcet tones were amplified over the aerodrome to the waiting thousands at the moment when she told Sir Herbert to “get back to the Crumbles menace, but Sally has a drink waiting for you to help you to bear it”. 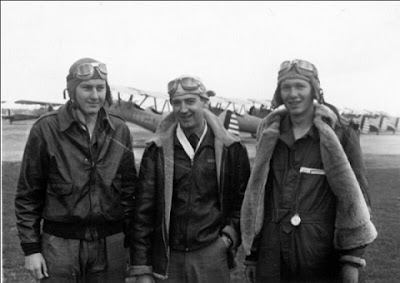 The flying is also great fun, and as it happens I am an absolute expert on this, because I read a lot of Biggles books when I was young, many of them set in the 1930s. So I nodded sagely when they discussed taxi-ing, for example, because Biggles’ mate Ginger once got a job as a pilot from someone (a grizzled old-timer) who said ‘I can see you can fly before you even take off, because taxiing on the ground is just as hard as flying.’ (Actually I am not sure this can be true?)

Ginger was just at the end of his audition-style flight – ‘you’ve done well, take her home’ - when he was suddenly attacked by an opposition plane. His mentor offered to take over, as there were twin controls, but Ginger said ‘the gun button is only on my joystick, I have to be the one to operate it and fly at the same time’. He successfully brought down the enemy and the old guy says ‘who taught you to fly like that?’ and he excitedly answers ‘Biggles!’ even though this is meant to be secret. So – he gets the job.

I have not read this book in 50 years I guess, and although the quotes above will not be word for word, I did not have to look up or check any of this.

I read a huge number of Captain WE Johns’ Biggles books, but I’m pretty sure this was Biggles in Spain, which also made me an expert on the Spanish Civil War as you can find out in this post, one I particularly enjoyed writing. I think it may be one of my favourite posts, certainly top 10 of posts defining the tosh of yesteryear. Ah, Dennis Wheatley – a name to conjure with.

And, another post I enjoyed writing (‘I can hardly type for laughing’) is James and the Giant Octopus, possibly my favourite post title also, in which I uncover the hitherto unsuspected link between Biggles and James Bond.

Teaser: there may be more on James Bond soon. But – much more immediate – there will be another post on Death of an Airman even sooner, because of a Whole Other Aspect to this book and its plot which needs to be looked at… 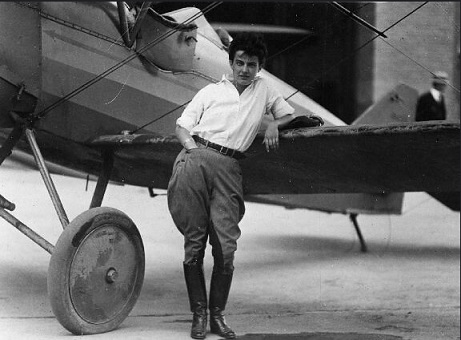 Third picture: three test pilots, so far as I can tell.

Fourth one – unknown person. I have used this one before because it is completely irresistible in my important view.