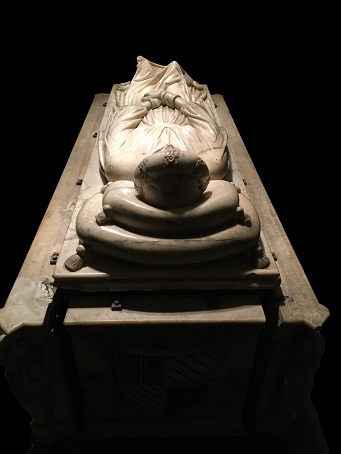 I recently did a post on JL Carr’s A Month in the Country: one of the nice descriptions in it was of a memorial in the church at the centre of the story:

There was one good wall-monument – a Baroque bas-relief of a well-built young lady, Laetitia Hebron, modestly hiding her essential glory by hanging on tight to a shroud as she clambered from an elegant catafalque.

That got me thinking also of another recent read, and that tripped off another thought, and the next thing you know I’ve made a list: tombs and memorials inside churches:

The Crusader’s Tomb by AJ Cronin  This book of 1956 (Fabulously terrible - @Lissa Evans; Tosh - @Clothes in Books) is, self-evidently, named after a memorial: it is for an ancestor of protagonist Stephen Desmonde, and sits in the church where his father is rector.

Stephen’s gaze fell, dwelt for a long moment upon the stony effigy of his ancestor, who, in the half-light, seemed to smile cynically towards him. Gazing at the sword, the great mailed gauntlets, a phrase of his boyhood reading reoccurred to him: the iron hand in the velvet glove.

But it plays no part in the story, except someone is buried near it at the end, and it is never in the book described as a tomb.

***ADDED LATER  staunch blogfriend Shay wonders if the book was named after the poem A Crusader's Tomb by Francis Palgrave. Hard to say, but the poem itself is well worth reading - you can find it  here - I found it surprising, charming and moving. And it fits in well with the theme of this post. I had only known the poet's name from his anthologies.

***ALSO ADDED LATER - I subsequently heard about the memorial created by the early 20th C Lord Curzon for his wife Mary, in a chapel at the family estate. It started with her effigy, and his was prepared but stored away till he actually died some years later. Now the two of them lie together, with some angels peering at them. There is an excellent blogpost with photos here.

Nothing to Report by Carola Oman (1940) is a tale of English village life in the year before WW2 broke out: light-hearted and in the manner of the Provincial Lady. It includes a nice description of two tombs in the local church:

Far the most noticeable objects in the Morrison chapel, however, were the enormous tombs of the two baronets who had flourished in the days of Queen Anne. There they lay—Sir Crosbie and his nephew, Sir Barnaby—mutely hallooing to one another, each with one arm upraised. Both had steamer rugs drawn up to their middles, and wore full-bottomed wigs pushed back from high marble foreheads, intricate lace cravats, and coats trimmed with many little buttons. They had evidently arisen in their bunks at a dramatic moment of ocean travel. “How are you, my poor fellow?” Sir Barnaby was calling to Sir Crosbie. But to Sir Crosbie, whose jaws were tightly compressed and whose lips had an unmistakable frilly appearance, speech was clearly impossible. Before she dropped on her knees, Mary cast an affectionate glance at the pair, always known at Woodside as “the seasick ancestors.”

And as ever – well done Furrowed Middlebrow and Dean St Press for re-discovering the book. 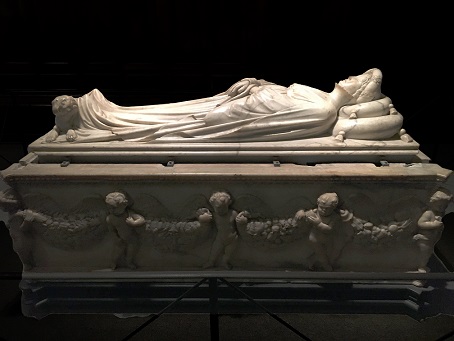 In Elfrida Vipont’s Lark in the Morn (1948), a children’s book that would now be called YA, and an infuriating classic for those who read it at an impressionable age, the budding singer Kit visits Heryot Cathedral and finds a family tomb behind a grille.

If you are wondering why it is infuriating, I think I summed up the whole business in this blogpost as well as having a fair stab at illustrating the story of the teacher in the negligee (IKR?). I was wondering how this Carnegie-award winning book demonstrated what a golden age it was for children’s books of the past. (SPOILER – not at all) ‘When people tell you that modern-day children’s books aren’t up to much, it’s a good idea to look at some older ones, just for, you know, interest.’

There was a little chapel in the south aisle of the chancel [of Heryot Cathedral] dedicated to St Merlyon. It was cut off from the aisle, first by the back of a big tomb, and then by a little grille with a padlocked gate…. The tomb was an interesting one, when you got to the other side of it. An Elizabethan gentleman and his lady lay side by side, with folded hands; their hands were beautifully modelled. Their children knelt below them is stiff little rows… seven sons and five daughters.’ 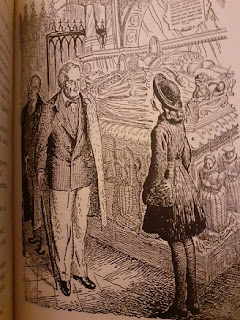 Kit and the tomb

In Antonia Forest’s End of Term (1959) another YA book, but much better than the Vipont (& sharing singing skills in the heroines) Nicola Marlow finds a carving of a falcon hidden away behind a dark pillar – it’s not a tomb or a memorial, but a sweet scene, and I always wondered if Antonia Forest had found something similar – I would love to know where. I can’t find such a stone carving, but did find this wooden hawk at Lincoln Cathedral. 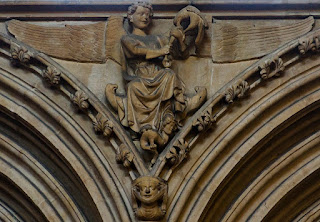 And as soon as you start thinking about a topic, they pop up all over the place: this was in the most recent Patricia Wentworth book I read, The Listening Eye

This [church] contained quite an elaborate memorial of the Merefield family, now extinct, in the form of a wall sculpture of Sir Lucas de Merefield and his wife Philippa. They knelt facing each other in stone, he in armour, and she in robe and wimple with five daughters behind her puppet-small, and five boys behind him, all with bent heads and folded hands.

And this in Dorothy Bowers’ Shadows Before:

He went to look at the great alabaster tomb of the Ruffs in the chancel. The clothes of the recumbent effigies and the veins of their folded hands were exquisitely wrought. There they lay, Sir Thomas and Anne, his wife, indifferent in their proud security to the fear and distress that possessed their home.

The power couple of literary tombs are Richard Fitzalan, Earl of Arundel, and his second wife, Eleanor of Lancaster. They are the inhabitors of the original Arundel Tomb,  as featured in one of Philip Larkin’s best-loved poems (no not that one, no idea what they were like as parents).  The tomb is in Chichester Cathedral, and it is always salutary to read up on it (these are helpful notes from the Cathedral website) – this is not where they were originally buried, and the statue had been so badly damaged that the legendary positioning of the hands is a speculative restoration. And, of course that last line of the poem is not a statement of fact, it is a doubtful speculation:

They hardly meant has come to be

Their final blazon, and to prove

What will survive of us is love. 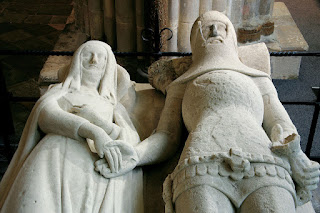 Spoiling a hundred optimistic uses of the phrase – if it gives people hope, if they want to believe what Larkin himself was most certainly not sure of, is that OK?

But it is true that to see the tomb in place is a transcendent experience, largely because of the literary history.

And another poem: Robert Herrick’s Upon a Wife that dyed mad with Jealousie

In this little Vault she Lyes,

Here, with all her jealousies:

Quiet yet; but if ye make

Any  noise, they both will wake,

And such spirits raise, ‘twill then

More rising from tombs, and just to lower the tone: I wrote in the Guardian about the niche literary trope of digging up bodies in churches and churchyards, and always like to bring out again one of my favourite lines of all time, as written by James Thurber ‘after reading too many Southern Gothic novels’

Old Nate Birge… was chewing on a splinter of wood and watching the moon come up lazily out of the old cemetery in which nine of his daughters were lying, only two of whom were dead.

Pictures of the marble tomb are by PerryPhotography. It is the memorial to Ilaria del Carretto (1379-1405), second wife of Paolo Guinigi, Lord of Lucca from 1400 – 1430, sculpted by Jacopo della Quercia. It is in the Cathedral of San Martino in Lucca. The dog at  her feet symbolises fidelity. 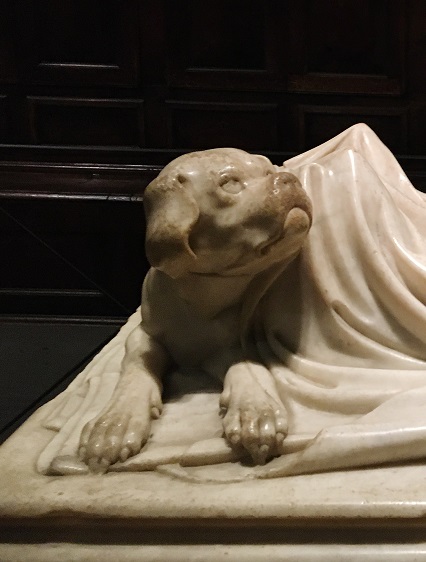