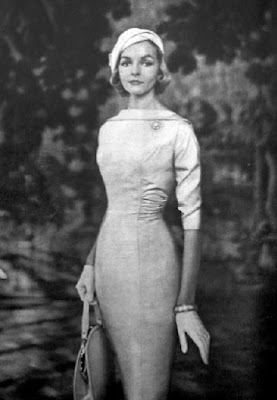 She was wearing crisp cotton, the colour of lemon ice, and her gloves were white. The pale shining hair was brushed into an elaborate and very attractive style…. She pushed the heavy gold bracelet higher up her wrist… 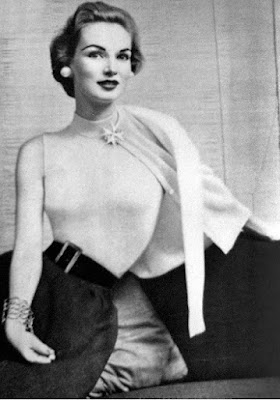 She had on a white top, and a blue skirt belted tightly to a slim waist with a big leather belt the colour of new horse-chestnuts.

comments: This was the book that inspired me to post on Impersonation in Books a few days ago – a classic of the genre. It’s something of a gender-switched Brat Farrar, as the heroine says herself.
In a blogpost on books for convalescents, I explained how I first came across Mary Stewart: I was a teenager laid up with a broken foot, and a kind friend of my mother's brought over a huge bag of books - what a great thing to do... The Stewart book in the bag was The Ivy Tree, and I was entranced by it, and now (a lot of years later) I think I was quite right in my verdict, and right to carry on reading her.

All her contemporary novels featured feisty independent young women, often going to foreign places (not the case in this one), and always having adventures. The women could look after themselves, and my one line summing-up would be that although they always found romance, that’s not what they were looking for. In this blogpost I explained why I thought they were great books for Young Adults as well as adults -  ‘they certainly made me think that a woman’s 20s might be a great time for travel, work and a nice flat. This was by no means the impression you would get from many adult novels of the time.’ I also talked about my great everlasting love for her (totally different) Arthurian book The Crystal Cave.

So: The Ivy Tree. Our heroine Mary Grey is sitting near Hadrian’s Wall in Northumberland looking at the countryside when she is approached by a man who thinks he knows her. When he is told he is mistaken, his brain cogs start to turn, and in no time at all he has invited her to pretend to be his missing cousin Annabel. One of the classic impersonation plots!

As ever in these books, we know the plot is going to go ahead, but there has to be a certain amount of worrying and qualms and persuasion. Then we get onto the fascinating business of teaching someone every detail of someone else’s life. Eventually the new Annabel tips up at Whitescar, the family home of the Winslows, ready to charm the old grandfather, and protect the inheritance of her co-conspirator, Connor. (always known as Con: no comment).

On we go – life at the farm, people coming and going, more family members who might or might not have a dog in the race. A nearby house and family have been tied up with the Winslows. There has been a Jane Eyre-esque fire and death: and there are aspects that would remind you of Wuthering Heights and Heathcliff. Horses are important, as are farming, land and wills, and Roman remains, and a quarry. It is all tremendous stuff and I enjoyed it very much. Can’t say much more for fear of spoilers, but there are wonderful scenes and unexpected turns.

In my usual bolshy way, I was less charmed than I feel was intended by stubborn old grandpa getting his own way and playing with the feelings of his descendants and staff. And, always, where land and inheritance are involved I tend to be on the side of the people working the land, at the mercy of others’ whims and wills, over those swanning in from a life elsewhere because of an important bloodline.

But the heroine was matchless, and I loved her. I particularly liked her conversations with Cousin Julie – a late arrival as a character, and Stewart kept up the tension as to what she might be like. It has to be said that some of the discussions of men and their ways, and women’s attitudes to them, could make a modern person wince slightly. And of course the book is full of other indications of its time. Everyone smokes all the time. People are horrified by the idea of adultery, and a pregnancy out of marriage. Our heroine wears trousers, but only to ride in – women in trousers always a favourite subject round here. There is a lost letter that has changed the course of events – something else I like to enjoy.

I like a rural sentence I can’t understand: ‘The panicles of guelder-rose, thick-coloured as Devonshire cream, spilled dew onto my shoulder, chilly through the thin shirt.’ This sounds to me like a sentence produced by a computer.

And I have a major complaint about the book, a way in which the author misled me. After a very dramatic outdoors scene in a storm, people retire to the kitchen for refreshments and Important Talking. And at one point Mary says ‘Oh my dear sweet heaven!’ – she hasn’t been paying attention to the soup warming on the stove, and ‘you should never let soup boil.’ Well. As a teenager I took this very seriously, and it was a long time before I realized that this is not particularly true, not a fixed rule of life. I was over-cautious with soup for years, years….

But it’s not much to put on the debit side against years of entertainment from Mary Stewart.

Picture from Vogue via Clover Vintage