The groom's gift to the bride 2: Jane Eyre


[Jane Eyre is about to marry her employer, Mr Rochester. Or at least she thinks she is. She is preparing for the most famous interrupted wedding in literature.]


“…Mr Rochester obliged me to go to a certain silk warehouse: there I was ordered to choose half-a-dozen dresses. I hated the business, I begged leave to defer it: no--it should be gone through with now. By dint of entreaties expressed in energetic whispers, I reduced the half-dozen to two: these however, he vowed he would select himself. With anxiety I watched his eye rove over the gay stores: he fixed on a rich silk of the most brilliant amethyst dye, and a superb pink satin. I told him in a new series of whispers, that he might as well buy me a gold gown and a silver bonnet at once: I should certainly never venture to wear his choice. With infinite difficulty, for he was stubborn as a stone, I persuaded him to make an exchange in favour of a sober black satin and pearl-grey silk. ‘It might pass for the present,’ he said; ‘but he would yet see me glittering like a parterre.’ 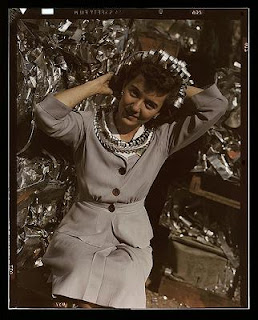 Glad was I to get him out of the silk warehouse, and then out of a jewellers shop: the more he bought me, the more my cheek burned with a sense of annoyance and degradation. …. He smiled; and I thought his smile was such as a sultan might, in a blissful and fond moment, bestow on a slave his gold and gems had enriched: I crushed his hand, which was ever hunting mine, vigorously, and thrust it back to him red with the passionate pressure.
"You need not look in that way," I said; "if you do, I'll wear nothing but my old Lowood frocks to the end of the chapter. I'll be married in this lilac gingham: you may make a dressing-gown for yourself out of the pearl-grey silk, and an infinite series of waistcoats out of the black satin."

Following on from the Duchess of Denver and Lord Peter Wimsey – yesterday’s entry – Jane Eyre showing that at least it was grey satin. But a remarkably similar situation to Harriet Vane’s – the idealized rich man, who loves the poor girl for her brain, for her ungrasping independence, for her witty ripostes - but does still find her hypnotically attractive. Fine writers and great books, but was it not a bit transparent? Neither author seems to have found the kind of relationship she would have liked in life, but then if Bronte (approx. 30 when she wrote J.Eyre) and Sayers (44 at the time of Busman’s Honeymoon) still thought the Rochester/Wimsey model was the right one, then perhaps that is not surprising.
The wonderful literary critic Patricia Beer – discussing C Bronte’s fondness for teachers - says “Mr Rochester teaches Jane nothing at all, except the inadvisability of accepting a proposal from a man who immediately adds, ‘God pardon me.’”
Clothes in Books  revolts from showing a severe Victorian portrait of the governess in grey, so the photo shows the lovely Annette del Sur, an office worker, promoting salvage in the 1940s, dressed in a handsome grey outfit: an early recycler, looking fabulous, and an outfit good enough to marry anyone in.
The photo is from the Library of Congress, featured on Flickr.