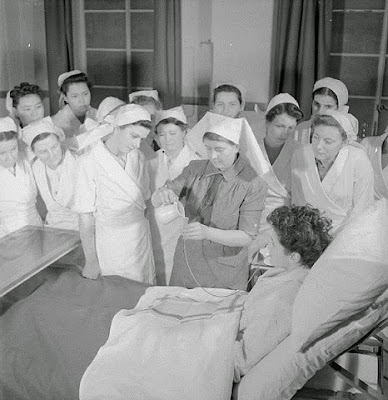 The book The Rack, by AE Ellis, has just been published in a new edition in the UK – it is a strange and unusual book, and I covered it on the blog two years ago Christmas in the sanatorium (clothesinbooks.blogspot.com)

It was recommended by a reader when I did a series of entries on sanatorium-lit a while before – as I explain, I had missed it out because I had never heard of it. This entry gives a good overview of my wide reading on the subject, with links, and on the whole strange and sad business of the attempts to tackle TB.

My proud boast is that I read Thomas Mann’s the Magic Mountain (700+ pages) - as well as everything else.

If I wanted to recommend one book about TB sufferers, though, it would be Betty MacDonald’s The Plague and I. (There are more posts here and here). As I keep saying – others find this book hilariously funny, and I just plain didn’t, but it is a compelling and convincing picture of the author’s stay in a sanatorium in Washington State in the US in the late 1930s. Betty MacDonald wrote gently massaged memoirs – tidied up and changed around and very anecdotal – but the essential truth seems manifest. Her first huge bestseller, The Egg and I, brought on lawsuits from those who claimed to feature in it, so everyone was very careful next time around. The line between fiction and non-fiction is challenged by her books, but the setting in the sanatorium, and the details of the treatment, are authentic.

These are Becker’s immensely helpful comments on The Plague and I:

The book is educational. Betty feeds the information about tuberculosis to readers through the device of patient dialogue. Her descriptions of her medical interventions are specific and graphic. She manages to convey the endless tedium of round-the-clock resting without making readers feel that they are enduring tedium themselves. She examines her own reactions to the situations she faces, drawing readers into her personal struggle. When she is discharged, they share her overwhelming awe at being privileged to reclaim ordinary life. 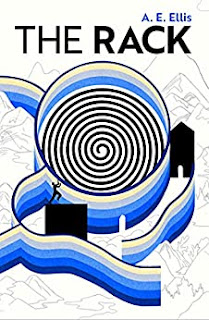 Reading a new review of The Rack, and remembering my strange venture into sanatorium books in the past, made me think about books on illness – probably the Late Unpleasantness has also directed my ideas. So I have made a list of some other books on these topics that I have blogged on: 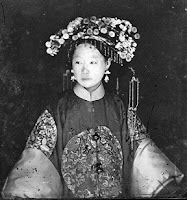 W Somerset Maugham The Painted Veil Haunting and very under-rated, this 1920s look at the colonizing classes in the Far East features a cholera outbreak as a key plot point. Posts here and here, and there is also an excellent 2007 film. I always say the same thing about WSM: his women characters (and their sexuality) are streets ahead of his contemporary male authors, and his reputation should be much higher.

Emily St John Mandel’s Station Eleven had a moment during the pandemic, and was made into a drama series. I blogged on the book back in 2014, and said this: ‘it is terrifying, disorienting, enthralling, creepy and life-affirming. It deals with the aftermath of a deadly flu, which wipes out 99% of the population and leaves civilization as we know it destroyed.’ It is a great book.

Much less well-known is The Blondes by Emily Schulz: ‘It is hilarious and satirical, and while telling a scarey and unsettling dystopian-future story, also gives a great commentary on modern life, gender relations, and both the way we look, and the way we look at one another. A very nasty virus is hitting women, and mostly blonde women. It causes them to act strangely and then to attack, and often kill, people. It is something like rabies.’

Jane Smiley Ten days in the hills (post here, with a link to a previous one) A group of people are holed up together in a posh house outside Hollywood, while something bad rages outside. The idea comes from The Decameron by Boccaccio, in which it is plague the story-tellers are avoiding, whereas here it is war – but I am going to include it because I LOVE this book, I think it is a great contemporary American novel, and I do not know why it is not better known. (And for no good reason I can include this quote: She laughs. ‘They could tell Boccaccio a tale, those sinners at Wolf Hall.’ Guess which book that comes from. )

The very latest addition: Jim Noy’s The Red Death Murders – on the blog a few weeks ago – features a group of men locked up in a castle while plague rages outside. They fight hard to keep out any possibility of infection, but also are trying to find out who is killing them off one by one, and how they are doing it.

Hamnet by Maggie O’Farrell had a moment during the pandemic too, as by chance it featured plague carrying off William Shakespeare’s son in 16th century Stratford. A lovely and affecting book, and O’Farrell has made a wonderful heroine out of one of the unknown women of history.

Green For Danger by Christianna Brand isn’t so much about illness, but its hospital setting is all-encompassing, and it is one of my favourite murder stories of all time, so it gets a place here. PD James’s Shroud for a Nightingale gets in with the same justification. If you’ve read the book you’ll get the (top) picture…

Coming out the other side – there are also on the blog no less than two posts featuring books for convalescents – one with suggestions from me, one full of ideas from readers.

So obviously I’m now going to say – what books on illness, hospitals, plague, viruses, nurses and doctors do you recommend? Add them to the comments please.