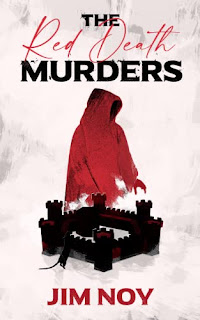 I’m a huge fan of John Dickson Carr (as are all Golden Age detective fans) but I have one big complaint against him: JDC never once came to meet me at Waterloo station to buy me a coffee and discuss the plot of one of his books in great detail, with particular attention to which ‘impossible’ aspects were feasible, original, or difficult to explain. 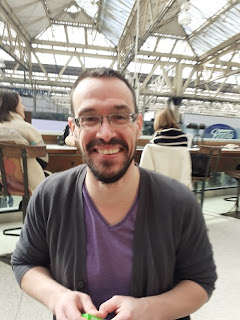 So today’s book,  Jim’s The Red Death Murders, starts with a big advantage. In fact I had read and loved it before arranging to talk it over with Jim, so that was all very satisfactory.

He took as his starting point the Edgar Allen Poe story The Masque of Red Death - which, every time I read it I am astonished by how short it is: I think of it as novella length but it isn’t. Handily Red Death Murders includes the Poe story at the end of the book. 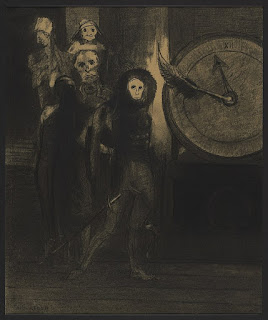 Jim's book is set in an unspecified time and place which he calls a Fantasy/faux-Medieval universe – so the point is not historical accuracy or research. It’s what Rachel from Friends would call ‘the historical period of Days of Yore, or Yesteryear’: creating a world that we can recognize from other works of fiction – traditional weapons, old-school clothes and food, and a castle. No modern appliances, inventions or means of communication. We don’t need more certainty than that.

The action takes place entirely in the castle. A group of men are enclosed together, while a plague rages outside: they are protecting themselves in quite elaborate ways from the virus, oh I mean the disease. And this means they have a closed circle, and in effect a gigantic locked room, with some other locked rooms within it – just what we need for a murder story.

There aren’t that many people there to begin with, and soon the number is being reduced in ever more inventive ways: yes, impossible ways. It is a tour de force of tricksy, hard-to-explain crimes.

We are seeing most of the action through the eyes of Thomas, a young personal servant to one of the 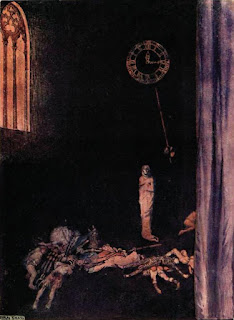 lords, Sir William. He and his master, along with Will’s brother Sir Marcus, are trying to work out what is going on. The action gets tighter and tighter, and there are fewer and fewer people left. There are some excellent genuinely surprising revelations, and then the traditional solution and full explanation. But you might be trying to work out from how many pages are left (calculation not helped by the Poe story at the end) that there may be another one coming… all in the best traditions of old school Golden Age detection.

I enjoyed it hugely: it was clever, complex and largely unguessble, though very much fair play. I am very pleased that Jim is going to make a series of it – sign me up for the next entries.

I delayed writing this blogpost till after Jim and I had met, assuming I would have all kinds of helpful quotes from him to put in. And he and I did have a most exhilarating discussion about the details of the plot, but the problem is that I can’t reveal most of it as it would spoiler. I asked him to spell out the 4 and a half proper locked room puzzles he had mentioned. I asked him how long it took to work out the details of one of them. We talked about which were the very best clues. 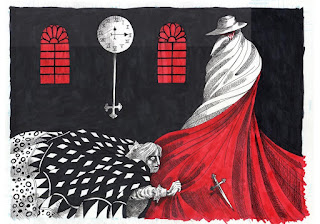 I only have one real complaint about the book. There is a shortage of something, something missing. It is of course …. Clothes. Come on, Jim, mate, this is Clothes in Books, who came on your podcast to talk about stocking tops in Murder at the Vicarage and lesbian trousers in Murder is Announced. Could you not have put some outfits in there for me? Please try next time.

But then – normally the lack of clothes means I can’t find good pictures, but luckily Mr E A Poe has ensured that there are wonderful illustrations that suit Jim’s book too. So there’s Jim, and Jim’s cover, and the rest of the pictures are from editions of Poe.

He has written about his book – entertainingly and without spoilers – in posts here and here. 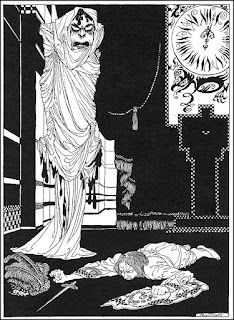