The Devil at Saxon Wall by Gladys Mitchell 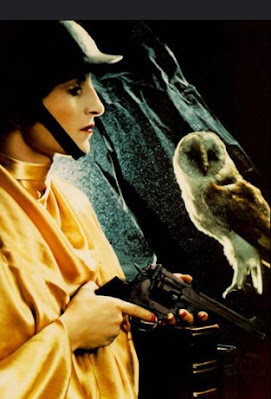 The picture does not represent any specific scene in this book, although there are revolver goings-on and an owl, but surely any Gladys Mitchell fan would agree it  has the slightly surreal and mysterious aura of the books...

My new friend since the recent Bodies From the Library conference is Jason Half, a complete expert on all things Gladys Mitchell – Len Tyler and I did a session on GM, and Jason was supportive and generous.

So I am going to quote from Jason’s tribute site The Stone House, where every one of Mitchell’s crime stories is reviewed rated and ranked. The Devil at Saxon Wall is set in a hilariously awful village, and Jason says this:

‘any information offered by the townfolk is often indirect and abstruse. Mrs. Bradley herself states that the natives "were incapable of making straight-forward statements...even their lies were elliptical." This trait lends flavor to characterization and tone, but it tends to hamper, if not defeat, the efforts of the fair-play mystery reader.’

Marvellous and exact. This village gets weirder and weirder, and the inhabitants darker and wickeder. It is heading straight for Cold Comfort Farm territory, or else The Wicker Man. There is a character called Martha Passion. There is a lot of stone-throwing. The villagers have ‘thick, dirty fair hair, unkempt…narrow, shifty eyes under curiously straight brows, low foreheads, big splayed feet, as though they were unaccustomed to the wearing of hard leather boots, and large, coarse hands on the ends of abnormally long arms.’

There is a drought, and the desperation over the water running out is well done. There is a feel for claustrophobia and a fear of civil unrest. Everyone behaves quite badly in their different ways. Is there a plague of frogs? Where will the goats turn up? Whose body is in which coffin…? Of course in a Gladys Mitchell book you are never certain of getting answers to all your questions.

Before moving on to various ramblings about, and diversions from, the book, I am going to give a strong recommendation: this book is great fun, but also creepy: full of atmosphere and painting a memorable picture of this village. It is also very funny. It is a good read.

The village and vicarage are rather a splendid contrast to those in Christie’s 1930 Murder at the Vicarage, a great blog favourite, see also podcast here - geographically they would be (as far as one can guess with Christie) no more than 50 miles apart but could’ve been on different planets. GM is fairly specific that the village of horrors here is in Hampshire, not that far from where I live in fact.

There is a rambling supplot about three potentially-swapped babies. I said this in a post on a different book with this plotline, ‘Fully three different babies get lost, mixed up or wrongly assigned – even Shakespeare would have made do with two’ – not a sentence you’d think you’d use once in a decade of book-blogging, let alone twice. And I actually think Mrs Bradley is wrong in her genetic conclusions about the children – the simple test she proposes absolutely would not solve the problem because the genetic inheritance she claims is certain, is not. Not that I’d say it to her face of course – she’s terrifying. She might cackle with Satanic mirth and poke me painfully with her claw-like finger. Cackling is to Mrs Bradley as coughing is to Miss Silver in the Patricia Wentworth books.

Swapped babies always a great feature of literature – think of These Old Shades by Georgette Heyer, The Prince and the Pauper (children not babies), Puddnhead Wilson (both by Mark Twain – he obviously liked a swap), and my favourite obscure book, mentioned above, The Clue in the Castle.

One of the chapter headings, a quote from a psychology book, contains a reference to ‘learning curves’, a very common phrase now but presumably confined to academic literature then.

The book is dedicated to Helen Simpson, another writer and most interesting character who features in The Golden Age of Murder, Martin Edwards’ book about the Detection Club (of which both Mitchell and Simpson were members). Mitchell was obviously very fond of her: the dedication has a charming quote from the Bible.

‘Strength and honour are her clothing; She laugheth at the time to come…’

Helen Simpson was also a friend of Dorothy L Sayers and is one of the dedicatees of Busman’s Honeymoon, with a tribute to female friendship. And, with Clemence Dane, she co-wrote the crime story Enter Sir John, here on the blog.

There is a mention of water-creases, which I think is watercress, a very Hampshire foodstuff.

So there’s been a lot of enjoyable diversions here in the blogpost – what about clothes? One of the most memorable scenes involves a woman trying to seduce, or at least distract, a man while wearing nothing but a raincoat, hat and boots. This is how it is portrayed on the front cover, which I feel must have been a 'good selling cover' in 1935, a tremendous come-on, though it doesn’t really reflect the actual scene… 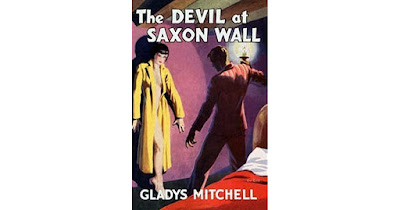 Mrs Bradley is ‘grinning like an alligator and dressed like a macaw’ and elsewhere has a ‘hideous’ jumper. 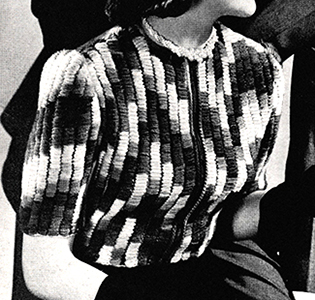 That top picture: On New Years Eve 2019 I featured photos from a 1930s party where young women dressed as goddesses, and Madame Yevonde took quite extraordinary colour photos. This is another of them – Minerva. The woman is Aileen Balcon, who was married to the film producer Michael Balcon, mother of Jill Balcon, who married the poet Cecil Day Lewis – better known to readers of this blog as crime writer Nicholas Blake, all over the blog – and is thus the grandmother of the actor Daniel Day Lewis.