Murder at the Vicarage by Agatha Christie 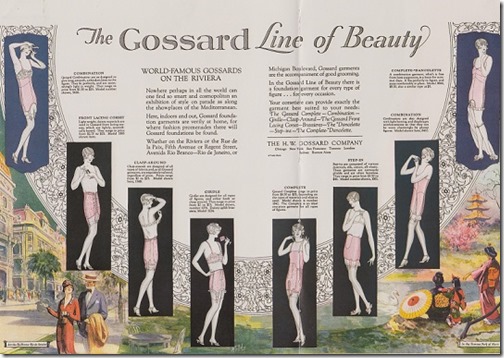 [Miss Marple is a key witness:]

“So Anne Protheroe says she killed her husband. Well, well. I don't think it's true. No, I'm almost sure it isn't true. Not with a woman like Anne Protheroe. Although one never can be quite sure about any one, can one? At least that's what I've found. When does she say she shot him?"

"At twenty minutes past six. Just after speaking to you."

Miss Marple shook her head slowly and pityingly. The pity was, I think, for two full-grown men being so foolish as to believe such a story. At least that is what we felt like.

"What did she shoot him with?"

"Where did she find it?"

"She brought it with her."

"Well, that she didn't do," said Miss Marple, with unexpected decision. "I can swear to that. She'd no such thing with her."

"You mightn't have seen it."

"Of course I should have seen it."

"If it had been in her handbag."

"She wasn't carrying a handbag."

"Well it might have been concealed - er - upon her person."

Miss Marple directed a glance of sorrow and scorn upon him.
"My dear Colonel Melchett, you know what young women are nowadays. Not ashamed to show exactly how the creator made them. She hadn't so much as a handkerchief in the top of her stocking.''

[A young woman has come to the Vicarage for moral support]

As I entered through the front door a murmur of voices caught my ear. I opened the drawing-room door.

On the sofa beside Griselda, conversing animatedly, sat Miss Gladys Cram. Her legs, which were encased in particularly shiny pink stockings, were crossed, and I had every opportunity of observing that she wore pink striped silk knickers.

[The ladies of the village are discussing a visiting artist]

"But loose," said Miss Hartnell. "Bound to be. An artist! Paris! Models! The Altogether!"

"Painting her in her bathing dress," said Mrs. Price Ridley. "Not quite nice."

"He's painting me too," said Griselda.

"But not in your bathing dress, dear," said Miss Marple.


observations: These are some examples of healthy vulgarity from the book – the vicar commenting on Miss Cram’s knickers is fairly astonishing. Miss Marple has already told us that while doing her bird-watching (ie spying) she recognized her – ‘I think it must have been Miss Cram because her skirts were so short.’ Even so – highly inappropriate remark from a vicar.

And it’s actually quite hard to imagine quite what Anne Protheroe was wearing – in 1930 this is, remember - that an observer could swear that no gun could be concealed. An afternoon outfit in an English village? Really, that tight? It seems an odd certainty for Miss Marple to have. But it certainly gets the reader thinking about the underwear of all these women, along with the prospect of their taking all their clothes off for that very handsome young painter working away in his studio/shed….

It’s always interesting to read this – Miss Marple’s first appearance in a novel – because she is so sharp and steely. At one point the vicar describes her as gentle and appealing, but that’s just before saying she is highly dangerous (in the nicest possible way): and there isn’t much of any kindly good nature in the book. She is, of course, a good egg with a good heart, but she is no old softy. It is almost against their will that some of the characters decide at the end that she is really rather a dear.

And then there’s all this underwear, and a very straightforward attitude to adultery and divorce.

It’s not a bad murder plot, though ludicrously complex, and you do get involved in the characters. I like the narrating vicar and his relationship with his wife Griselda – though it seems unlikely that the unworldly cleric would know that a character could not have worn blue earrings with a black outfit…

A great start to a long career for Miss Marple.

Amongst the many Agatha Christie entries on the blog, this one is of relevance – in The Secret of Chimneys in 1925, there is much unlikely talk from a young woman to her admirer about her control underwear….