New Year: How we used to celebrate, and the Importance of Chelsea 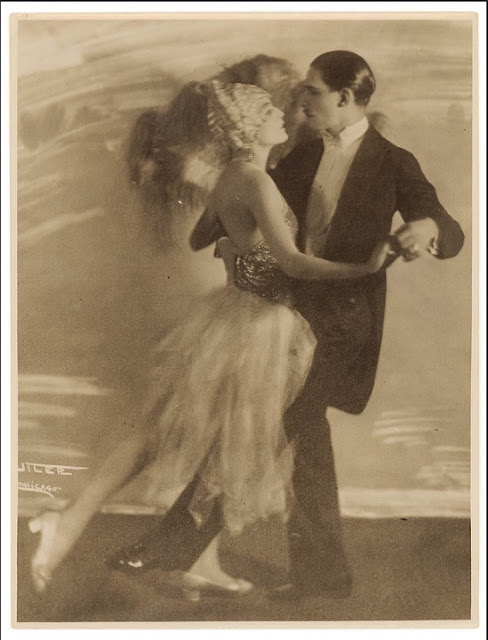 New Year’s Eve approached and I could think of little else except the night I would spend with Caroline at the Ball…. I was going as Count Cagliostro and was hiring most of my costume from a theatrical suppliers, but Caroline, who had decided to go as Marie Antoinette, was making her own dress…

The night of the Ball, the night when one bad year gave way to what proved to be a worse year, finally came. Before the War the Chelsea Arts Ball was the biggest party of the year. It may be still, for all I know. 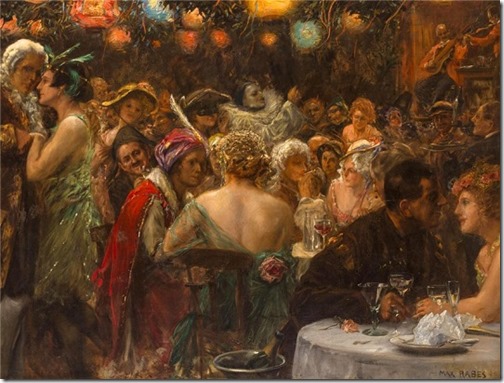 The floor of the Albert Hall was fringed with mock pavilions and pergolas and crowded with English, French, Russian and Venetian aristocrats in powdered wigs, as well as grenadiers, highwaymen and their molls, milkmaid, banditti, sans culottes and figures from the Commedia dell’Arte. Many of the revellers wore domino maks and these had the effect of making the eyes seem brighter and the smiles sharper. 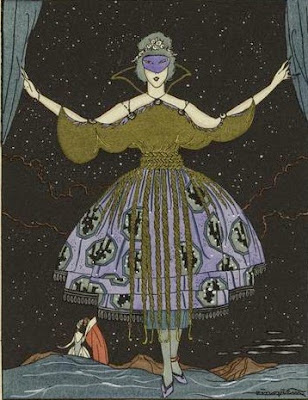 Of all the authors I have discovered in recent years, I think Robert Irwin might be the best. His Wonders Will Never Cease is a book that lives in my mind with startling clarity: it is amazing, an absolute stunner. The Mysteries of Algiers is also on the blog. And now this one: the story of a (fictional) Surrealist painter in the first half of the 20th century. His story weaves in real and imaginary people, and some very familiar events and happenings (for those of us who spend far too much time reading fiction and non-fiction of and about that era). For example George Orwell makes an absolutely hilarious cameo appearance.

Exquisite Corpse is a seamless book, very good and clever and readable – I think it doesn’t quite have the magic of Wonders, there’s something about the fact that in this case you don’t know exactly what he has made up and what was real… and the setting is SO familiar, and the carryon of the artist and his friends so familiar. But still, good fun and a most enjoyable read. But go for Wonders will Never Cease if you really want to have your socks knocked off.

The book plays with ideas of identity, and of men trying to shape women, and about the struggle for a person to find out what your importance was in someone else’s life. For these reasons I found similarities with the Hitchcock film Vertigo, and with the John Banville novel The Untouchable. 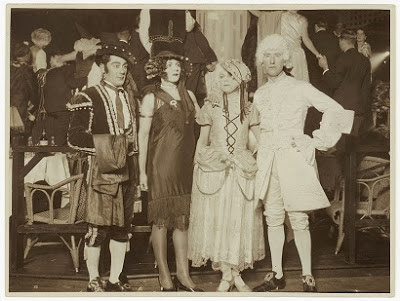 The Chelsea Arts Club, and the Ball, and barely-disguised versions of them, are stalwarts of the books of the time, and of the lives of the Bohemians. One of Agatha Christie’s Tommy and Tuppence stories features The Three Arts Ball, and much as I barely tolerate T&T, I always liked this:

“When I was a nice young girl,” said Tuppence [trying to persuade Tommy to go to the ball], “I was brought up to believe that men – especially husbands – were dissipated beings, fond of drinking and dancing and staying up late at night. It took an exceptionally beautiful and clever wife to keep them at home. Another illusion gone! All the wives I know are hankering to go out and dance,and weeping because their husbands will wear bedroom slippers and go to bed at half-past nine…”

You can also find a 1950s Christie view of Chelsea-as-Bohemian hangout in another of her stories -see blogpost here, along with cherished memory of Nancy Mitford’s Lady Montdore’s view on Chelsea: she was ‘rather cheered up by the idea that some poor ladies have to live in Chelsea.’

Nina Hamnett has a number of blog entries – her memoir Laughing Torso covers some very similar ground to Exquisite Corpse.

There’s a character in a Saki short story for whom

Disapproval was to her what neuralgia and fancy needlework are to many other women. She disapproved of early morning tea and auction bridge, of ski-ing and the two-step, of the Russian Ballet and the Chelsea Arts Club Ball, of the French policy in Morocco and the British policy everywhere.

And in the Wychford Poisoning Case by Anthony Berkeley (1926) two of the more raffish characters go to ‘the Four Arts Ball in Covent Garden, the last big public event of the season, going back afterwards to the Bischroma again’. (Bischroma is an Italian music term, and in this case is the name of a hotel of a kind where couples could go who were not married to each other).

The Chelsea Arts Ball features in Gladys Mitchell’s Tom Brown’s Body: it is offstage, but the creation of a remarkable costume for it – featuring a scarey mask and stilts -  is very important.

I can never resist a fancy dress ball for the blog, and extra points for one set at new year. The tango dancers at the top are by one of my favourites, Sam Hood and the State Library of New South Wales: the other pictures all come from previous entries in fact.

The painting is The Costume Ball by Max Freidrich Rabes from The Athenaeum.

The masked woman is a fashion illustration from Paris, from the NY Public Library.

The b/w picture of a fancy-dress ball is from that same  Sam Hood’s collection at the State Library of New South Wales.