the book: The Daisy Chain by Charlotte M Yonge 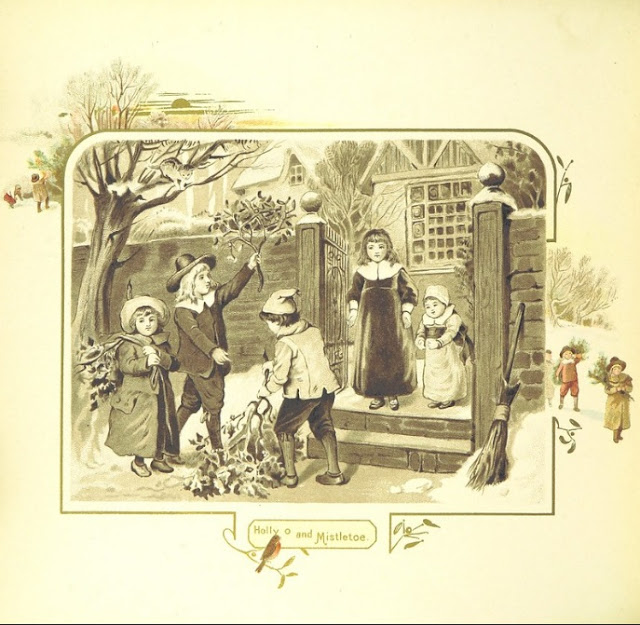 [Margaret] spent three hours in heart-beatings on Christmas Eve, when Hector, Mary, Tom, Blanche, and the dog Toby, were lost the whole day. However, they did come back at six o'clock, having been deluded by an old myth of George Larkins, into starting for a common, three miles beyond Cocksmoor, in search of mistletoe, with scarlet berries, and yellow holly, with leaves like a porcupine!

Failing these wonders, they had been contenting themselves with scarlet holly, in the Drydale plantations, when a rough voice exclaimed, "Who gave you leave to take that?" whereupon Tom had plunged into a thicket, and nearly "scratched out both his eyes"; but Hector boldly standing his ground, with Blanche in his hand, the woodman discovered that here was the Miss Mary, of whom his little girls talked so much, thereupon cut down the choicest boughs, and promised to leave a full supply at Dr. May's.

comments: Last week we had Robertson Davies’s story of collecting holly in Wales. So this is another expedition, with mistletoe too, but a lot earlier.

The Daisy Chain was a book I had intended to read for years, and finally got round to this year: see earlier posts here and here. It is a very strange book, and equally strange is its place in the popular culture of its time, and Charlotte M Yonge’s phenomenal success as an author.

Apparently it was her scenes of family life that readers liked so much, and in fact surprisingly there isn’t as much of the great moments as you might think – the book covers several years, but Christmas doesn’t feature much, and nor do other celebrations. A lot of death though.

Not a book that I am free-handedly recommending, although I am very glad I have now read it…

The picture is from a book called The Coming of Father Christmas, in the British Library, one of the many they have digitized and made available. It was published in 1894, but those children and their clothes plainly date from ‘idealized Victorian children time’ so not worried about the date.