The Listening Eye by Patricia Wentworth 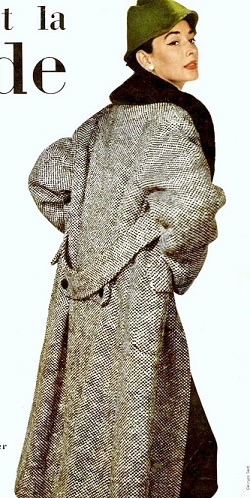 An excellent return to form from Patricia Wentworth and Miss Silver – I noted my disappointment in The Catherine Wheel, but I enjoyed this one very much – apart from one reservation, coming later.

The first scenes see a woman in a quiet London gallery. Two men are there too – apparently by chance and unknown to each other – but the woman is deaf and a skilled lipreader, so she can make out what they are saying. And it is very concerning indeed. That gets us off to a good start…

For a variety of unconvincing reasons, everyone ends up at a houseparty in the country: a very rich man, his potential second wife, his blank but beautiful daughter, some young house guests, the servants and of course Miss Busybody Silver. The millionaire owns Marie Antoinette’s Diamond Necklace, and a young man fetching it from the bank has just been shot dead. But the only people who knew what was happening were the people in the house. Who among them is up to no good? How does this link to the incident in the gallery?

To be honest, the usual clarity over who is ‘nice’, who isn’t, and who is stupid, does reduce the pool of suspects, but still the proceedings do have some mysteries and tension. And there are Bohemian artists and some flirting and boyfriend-stealing among the young people. But Miss Silver will resolve all, and unveil a particularly wicked and cold-hearted murderer.

My reservation about the book is this: that the Diamond Necklace is due to be worn at a grand fancy-dress ball: the rich man’s daughter (her name is Moira!) will dress as Marie Antoinette. Once the necklace has been stolen (and murder committed) it was felt that would be in bad taste, and it’s suggested that Moira should dress as Undine. Both splendid ideas, and regular readers will know that there is nothing I like better than a fancy dress ball, and I was busy planning how I would find suitable pictures. But the ball doesn’t take place! (or not within the confines of the book) As the percentage read on my Kindle grew higher and higher, I was less concerned about solving the crime and more bothered that there wasn’t going to be time for the ball. Tragic. 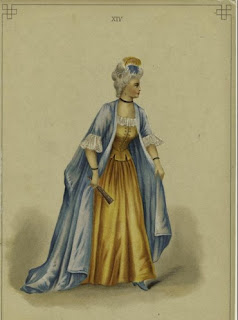 There is a bizarre linguistic attempt to find out whether someone is a real criminal or not: in discussing an overheard conversation the policeman says

‘Now I wonder if this man really said certainty. If we knew that, it would help to place him, because the ordinary crook would almost certainly have said cert.’

Everybody believes this. I don’t.

There is a description of a woman being widowed – her husband dies in a car crash while they are abroad. ‘It was rather frightful for her, because they had run out of money and she had to borrow to get home.’ That doesn’t really seem as though it might have been the worst thing about the situation – especially as she comes from money and wouldn’t have had any trouble getting help from family

The Miss Silver checklist is somewhat disappointing this time

Unusual names: Moira almost counts as unusual, though not round here it isn’t. And twice in my edition this is mis-spelled as Moria, which happens to me all the time (ie others mis-spell it, not me), Otherwise, Clay, Lucius, Paulina are the best she can do.

The nearest to a ladylike occupation is housekeeper at a school in the country, or secretary to a best-selling novelist answering fanmail.

However I was intrigued by the status of the man in charge of the art gallery in the opening scenes – I had assumed he was some kind of art expert, or collector, someone with expertise and a knowledge of the gallery world. But actually he is more of a caretaker, almost the janitor, and he has relations in the grocery business.

Unladylike preoccupation: I learned to my surprise that if you are going to smother someone with a pillow, it is efficient to make it wet first. Many is the smothering I have come across in books, but never heard that before. 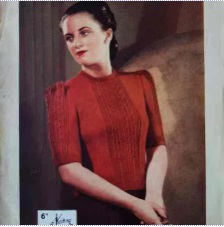 I loved this: She wore dark blue slacks and a scarlet jumper and she didn’t look as though she had a heart to break.

And then: Moira had lighted a cigarette. She wore grey slacks and an emerald pullover. She stood with one foot up on the kerb and blew a smoke-ring.

(the colours are the wrong way round in the picture, but I had to use it…) 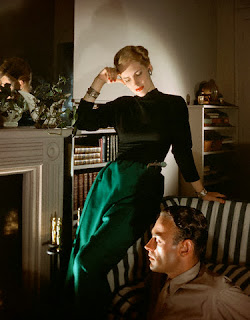 There is this nice description: Her sturdy form was comfortably and sensibly attired in a thick tweed coat, grey with a black and white fleck in it. She wore sensible laced-up shoes and a dark grey felt hat with a plain black ribbon.

I’m sure she looked nothing like as chic as the top picture, but, again, isn’t it lovely?

I sometimes find connections among the books – and here, as before, Miss Silver has been recommended by the Morays, and there is a Moray young man in the book. But there was another and most unexpected connection - self-plagiarism:

In the 1946 Spotlight, we have this sentence:

Gratitude made Dorinda’s eyes look exactly like peat-water with the sun on it.

While here ‘her eyes [were] very bright… he was reminded of peat-water with the sun shining on it’.

Then there is the ‘darling’ conversation in Catherine Wheel,

She laughed easily. ‘It doesn’t mean anything – one does it all the time. It just slipped out.’

and in this book:

There was an angry jerk in his voice as he said, ‘Don’t call me darling!’

‘But it doesn’t mean anything.’

He gave her a look of concentrated dislike and said, ‘That’s why.’ 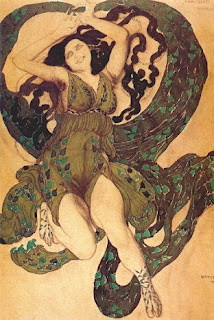 Fancy Dress: Despite the non-appearance of the ball, obviously I had to have a quick look at how they might have dressed.

This costume by Bakst would do for Undine. The Marie Antoinette near the top is a fancy dress costume rather than a portrait.

And while searching I found that Undine (she is both Undine and Ondine, I’m landing on Undine because Wentworth does) is a popular subject for fountains – I recently did a blogpost on beautiful fountains. There were some very classical stone Undines, but I particularly liked this more modern one, which is in Le Havre.

And, while we’re digressing, there is a memorable Undine in Edith Wharton’s Custom of the Country. Undine Spragg is a name you don’t forget in a hurry (along with the very complex plot of the book).

Marie Antoinette came from the NYPL.