Shadows Before by Dorothy Bowers 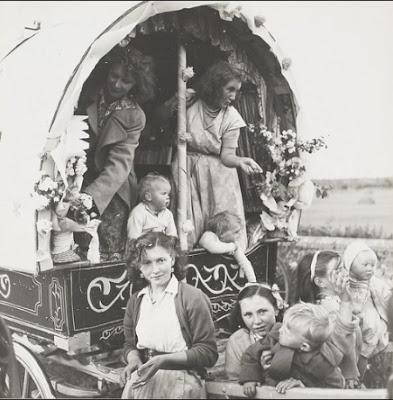 Crime writer Dorothy Bowers (1902-48) is my subject for the upcoming Bodies From the Library conference at the British Library. I am working through her books - more of them here.

Her first book was very much a village mystery. This one, her second, has a similar kind of setting, but you might say it was more of a country house murder. A young woman, Aurelia Brett, goes to work as a companion/carer to an older lady. There are oddities about her job interview. The household is plainly completely at odds with itself, there are all kinds of things going on: there are suspicions, and an atmosphere, and trouble, and a horrible history, and a will (as in Postcript to Poison, the first one).

Lately we’ve had books on the blog described as Spinster Miserylit and West Country Smugglers’ Gothic. I think this might be related: Single Ladies’ Gothic.

There is a chapter consisting of letters sent from the house over the course of a week – something I always greatly enjoy in a book. (It is hard to keep all the young people straight, but then I also complain if there aren’t enough suspects - at least she tried to create an adequate household of residents and visitors). And following the letters, there is a momentary gap, and now we are with the police, series character Inspector Pardoe, there has been a murder and we have to piece together what happened– another trope that I like very much. There is a lot of arsenic about, and also herb teas (which every crime reader knows to be deeply suspicious about).

My notes say the murder plot is incredibly complex and completely unguessable. A lot of information is unloaded in the final chapters. But that’s fine by me – and there were some very  satisfying surprises. So I will concentrate on some of the details in the book, an area where I am becoming increasingly respectful about Bowers.

Aurelia, the companion, is ‘dressed for walking in the green skirt and jumper, long green coat and small hat to match that she had worn on arrival two days before.’ She is taking her charge out for a walk, and they meet a new character, Esther O’Malley, introduced like this:

… a tall, thin woman, etched darkly against the northern sky. She was still some distance off, moving with a slow, lithe stride, an oblong basket on her hip. She was hatless, and the clothes she wore, a full skirt and three-quarter waisted coat of some dark material had an antique, unmatched air. On her feet were a man’s boots. As she climbed the intervening stile and drew closer, it was plain that she was a gypsy. Her features became discernible, a high-boned face that had once been handsome and was now ravaged and predatory, black, enigmatic eyes, and coarse hair knotted loosely on her neck.

The housekeeper says later that the O’Malley family ‘sinful livers as they are…live like pagans on the land and thieving off it.’ She also says that Esther tried to sell her the estate’s own ‘galeenies’. It was quite hard to find out what this meant – it’s a word that mostly has disappeared and is not in dictionaries – but it is guinea-fowl.

One of the young men is very interested in what he calls euthanasia, though it sounds from the discussion as though eugenics would be more accurate (certainly in modern usage, that may have changed).

I was delighted to find an instance of hat paint in the book, an odd incident from a peripheral character: she is at a railway station and commandeers the waiting room and spends the time dying her straw hat blue. I am fascinated by hat paint, which features in Agatha Christie books, and not much anywhere else. (I investigated in this post, on Murder is Easy where hat paint has a role.) Here the young woman says ‘a new hat for ten cents’ (she is American) and the wearing or absence of a hat is a block to recognition.

A Bacchante/Maenad brooch features – ‘carved in ebony, it represented the head of a Maenad, the short wild hair rippling up and back. It was a fine impassioned bit of work.’ 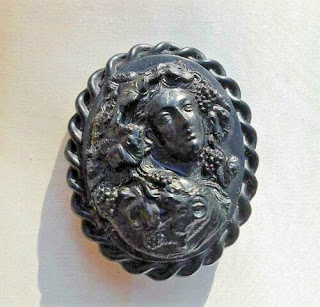 I like this from the inspector, encouraging a witness to speak out:

‘It’s usually better for everybody if things are told,’ he lied

It is never questioned in most murder stories, and the assumption that murder trumps all, and that no-one has a right to secrets, has always annoyed me.

Inspector Pardoe attends church where he had

listened to a surprising condemnation of the gathering. Privately, Pardoe thought the rector a little severe. The villagers might, for all he knew, be the heartless sensation-mongers he made them out, but when you had a murder (and presumably a murderer) plopped down in your midst, you ought to be permitted a little mongering.

Another witness is busy assigning blame:

‘…On his own admission he wouldn’t mind doing a bit of murder on the q.t.’

As a description of a plot violent enough to have involved the smashing to smithereens of a high-powered car, the inspector felt that this was something of an understatement.

There’s a tomb monument, mentioned in my post on church memorials here.

This is a really good traditional mystery, witty and surprising and full of great descriptions -  and the more I read of Bowers the more I like her.

The wonderful picture of Travellers is from National Library of Ireland, and is from later than the date of the book – 1954. They are on the way to a horse fair in County Cork.

Bodies from the Library Dorothy Bowers Shadows Before