A member of my family gave me this book as a present, and I was super-impressed, because they are not crime fans, and as many of us know, it is very hard for such a person to know what to buy. Success! He said he’d checked, and found that I had looked at two other books by Lange Lewis on the blog – The Birthday Murder, and Murder Among Friends – but not this one. Full marks for gift-giving. 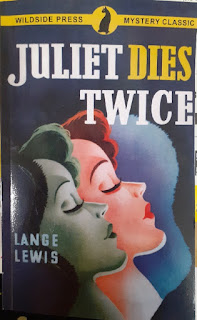 The other two Lewis books were excellent, I enjoyed them very much. This one combines an academic setting and a production of a play – two things I very much approve of in a murder story – but a review by my friend John Norris at Pretty Sinister Books meant I wasn’t expecting too much.

[Incidentally, there is a major feature of the book that doesn’t appear till the last third, and it’s difficult to know whether to mention it or not – John does describe it, I have decided to hold back. Personal choice.]

It is very oddly-structured book, and eventually I just decided to go with it and stop worrying about the content, and from that point I was able to enjoy it more. There might be much to criticize, but it is a short sharp read, and is full of the details of daily life that I enjoy so much.

The action takes place at a small college in LA, where the drama students are putting on a performance of Romeo and Juliet (oh you guessed that did you?). An actress is murdered, and series sleuth Lieutenant Tuck is brought in, helped along by student Eudora York, whom we follow for a lot of the action. 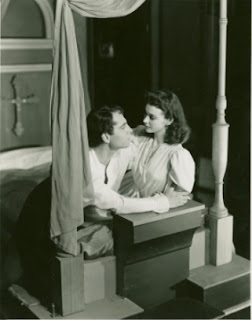 There is a lot of Psychology here – in their studies and in real life – and the emphasis on Freudianism gives it a very old-fashioned air. There is a lot about dreams, and word association, and the discovery of the murder is a great setup: Eudora is taking part in a psychological experiment, and thinks the body is part of the experiment.

There is an endearing total confidence in the ability of psychologists to know everything about their subjects and to predict and diagnose with certainty…. Really, the mental health issues and the mind investigations don’t bear thinking about too much. There are some very strange scenarios, and the heroine Eudora is obviously going to find love, but who with? And there is a very well-done atmosphere of student claustrophobia and semi-hysteria. I was expecting a bit more of the finale in the Hollywood Bowl. Obviously I’ve watched too many films – the list of those containing scenes there is fascinating. And I can add an extraordinary moment in a very obscure book – James M Cain’s Serenade – read all about it here. And recently the comedian Dave Chapell was attacked onstage at the Hollywood Bowl.

So the ending slightly fizzled out, though (mysteriously) at the same time I was genuinely surprised by the culprit. I considered the way in which one was earlier invited to discard this candidate was a cheat, as a matter of fact.

One of the details I enjoyed very much was that so many of the students had cars, and drove everywhere: obviously this is LA, but it is still hilariously different from the lives of students in the UK at that time. I was also intrigued to find out what the ‘turtle’ of the car was – I at first thought it was a small lockbox inside the car, but later events showed it to be the (US) trunk or (UK) boot.

The Second World War is just glimpsed in the background of this book.

All in all, an enjoyable read – and a great gift, so thank you

Top pictures from the New York World’s Fair in 1940, a fashion show for college students, via the New York Public Library. I used the photos previously for another student-based book, Horizontal Man by Helen Eustis (1946) A 'typical student' in that book is described as wearing a ‘nondescript tweed coat and the usual socks and moccasins’ and brown mittens. That’s New York, whereas the Lewis book is set in LA where the climate is gentler.