Towards Zero by Agatha Christie 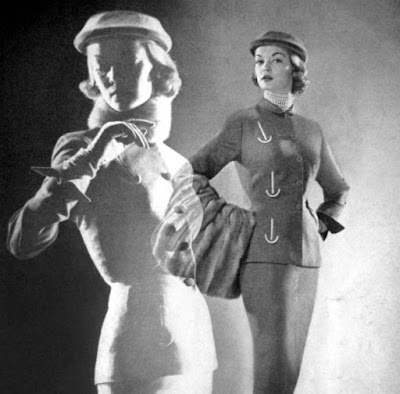 This is going to be the next book for Jim Noy’s Spoiler Warning podcast over at the  Invisible Event - we are zipping through Agatha Christie books at a rate of, oh, several a year – see the previous ones here.

I got in early with the re-read, and I like this book  even more this time around, and am really looking forward to discussing it, and hope as many people as possible will read it too so they can listen to Jim, Brad Friedman and me as we spoiler it. At length – no detail will remain undiscussed. But for now, no spoilers.

The book has a great structure – the conceit is that a murder starts a long way before it happens, so the book follows various people as they move towards zero hour. It’s one of those books that you absolutely remember the details of the solution, you wouldn’t be in any doubt what’s going on at a re-reading, but that just enables you to be completely lost in admiration of the plot and the 90% of it which is, frankly, close to perfect. The only reservation is the story of the child and the bow and arrow, which makes no sense at all (they all spent their sodding childhoods together, all of them, how could any of them be the child in the story?) There is a minor reservation also that no-one in their right minds would actually plan a murder like that, with all the things that could (would) have gone wrong, but as I always say, if you start on that road, most crime novels would rule themselves out.

Christie is very good at what you might call 'necessary exposition' – unlike many of her contemporaries – characters convincingly tell each other what they need to know, but not at excessive length, and tell us at the same time. Here Mary picks up Thomas from the station which gives her the chance to explain to him and us what is going on.

‘Really, Thomas, your visit just now is going to be a godsend. Things are rather difficult—and a stranger—or partial stranger is just what is needed.’

‘Audrey is here… And Nevile and his wife also’

Nevile’s wife Kay has a friend, Ted: ‘she had known him since she was 15. They had oiled and sunned themselves at Juan les Pins, had danced together and played tennis together. They had been not only friends but allies’ – which is strangely reminiscent of the legendary popsong of the 1960s, Peter Sarstedt’s ‘Where do you to my Lovely?’ (A comparison that I believe I am the first to make)

There is a character called Angus McWhirter, which is the name of the oddjob man in the John Dickson Carr book The Problem of the Wire Cage, published five years earlier, in 1939, and also featuring tennis.

There is one aspect that I am very much looking forward to discussing, but don’t want to spoiler here: a way in which Agatha Christie was way ahead of her time. (it’s to do with the situation of one of the women characters.) 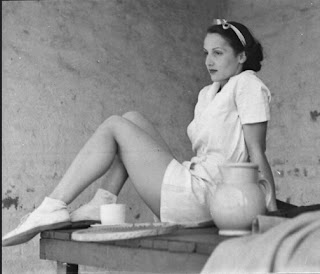 Kay Strange, dressed in shorts and a canary-coloured woolly, was leaning forward watching the tennis players. It was the semi-final of the St Loo tournament men’s singles, and Nevile was playing young Merrick, who was regarded as the coming star in the tennis firmament.

The woman in the picture may have forgotten her woolly (she is in Australia, warmer probably) but very much has an air of Kay in the book. There is a continual contrast drawn between two women – Kay is vibrant and striking while Audrey is paler and silvery and fades away.

‘He was struck suddenly with [Kay’s] intense and passionate beauty. A beauty of vivid colouring , of abundant and triumphant vitality. He looked across from her to Audrey, pale and mothlike in a silvery grey dress…’Red Rose and Snow White’”

Audrey wore a white swimsuit and looked like a delicate ivory figure… Kay lay on her face exposing her bronzed limbs and back to the sun. Ted from beyond her murmured: ‘The sun here isn’t a real sun.’ 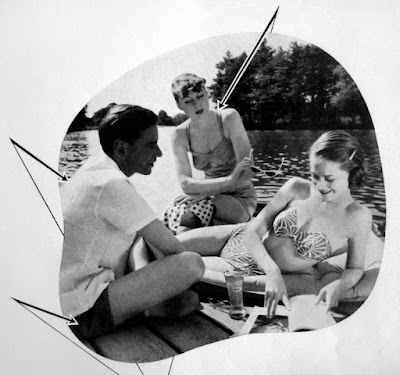 (It also says Mary had not bathed: that sounds rather personal but means that she did not go swimming, not that she didn’t bother washing)

Kay was dressed in a tweed skirt and a purple sweater – Audrey was wearing a pale grey flannel coat and skirt. In it she looked so pale and ghostlike that Battle was reminded of Kay’s words, ‘a grey ghost creeping about the house’. 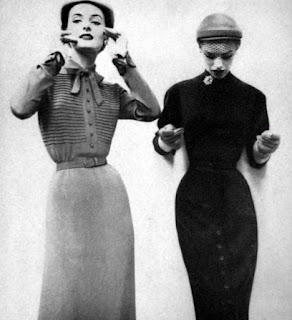 I decided to try to find pictures of two women which might give an air of Kay and Audrey – usually two women in a fashion pic are quite similar but I was quite pleased with all these, which are from 1951 (it was obviously a thing… ) The top one in particular gives the feel of the relationship between the two women. The book is from 1944, but not at all wartime-based, so could be set in the 1930s. But as it was vague – and my friend Johan claims that at least one Christie book is set in the future from when it was written – I was lavish in choosing 50s clothes..

I’m always intrigued by a discussion of mourning amongst the survivors and in this case there is a thrilling moment where the great rivals Kay and Audrey – who barely speak, and only then for Kay to insult Audrey  or accuse her of all kinds, including husband-stealing and murder –  go together ‘into Saltington in the car to get some black clothes’ for the funeral. Priorities. 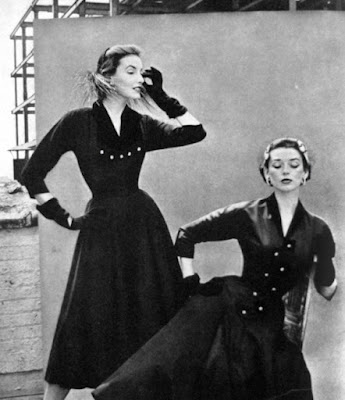 Other pictures from the Clover Vintage Tumbler.