Deed without a Name by Dorothy Bowers 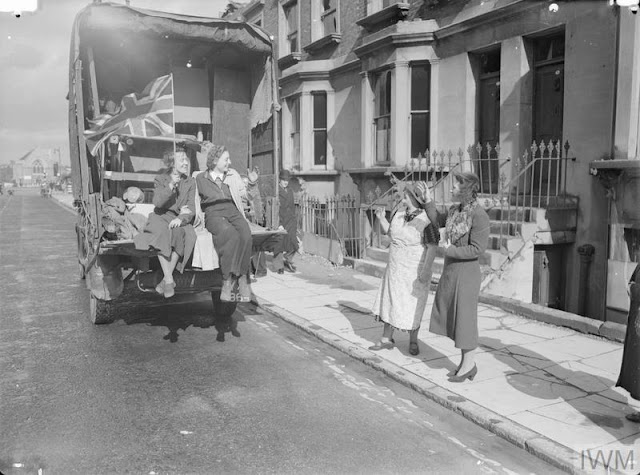 Dorothy Bowers is my subject for Bodies from the Library conference this year, so this is a taster – expect more to follow between now and June 18th. And do sign up for Bodies: it is back to being live in London, to our great delight, and there will also be a panel on female detectives don’t forget…

The reason I started with this Bowers title was because I had been re-reading Jenny Hartley’s brilliant Millions Like Us, which looks at British Women’s Fiction of the Second World War, and there is a glancing mention of Deed Without a Name. Now Bowers is not mentioned very much at all in works of litcrit, or modern history, or even books about Golden Age crime novels. So it’s a bit sad that here Deed is given as an example of a detective novel which ‘exploited refugees as convenient red herrings.’ I love Hartley’s book, but this actually is unfair and hard to back up.

This book is written and set in the very early days of WW2, and is a very interesting picture of London then, as people leave the capital and as the blackout descends. But refugees do not feature – the word literally is not in the book. Who it does feature are those people who had been rather too involved in Fascism & Anglo-German friendship groups in the 1930s:

“All [the group] was trying to do was to promote Anglo-German understanding, and that with complete impartiality.”

“It didn’t conduct itself toward the Jews with complete impartiality,” Pardoe remarked, with a lively memory for some unpleasant anti-Semitic business that had kept the police watchful in the summer.

She had become an avowed Fascist, black and brown, too little hampered by consistency to remark that the position to which women were relegated under the new regimes clashed with her own feminist outlook.

‘Black and brown’ refers to the shirts worn by members of the political groups – black means Mosley-ite Fascist and brown was the Nazis. You can’t do better than consult the story of Diana Mosley about these matters, and her sister Nancy Mitford – who in general has very liberal views – reminisced in 1955 (context makes clear this refers to a meeting in 1934):

‘I remember Prod [her husband] looked very pretty in his black shirt. But we were young and high-spirited then, and didn’t know about Buchenwald.’

Up into the Cold War days of the late 1970s, a Soviet insult about someone was to say they had ‘a touch of the brown shirt’ ie a history tainted with Nazism.

The book characters involved were either trying to back off as fast as they could, or were likely to be involved in shady activities. In the middle of all this down and dirty realism, there is a rather strange plot about American gangsters plonked in the middle, with references to Vinny the Backer, ‘Capone’s only serious rival’, and major gang attacks.

So a weird mixture of police procedural, home front novel, and spy thriller, but none the worse for being out of the ordinary.

Archie Mitfold, a young man about town, was trying to work something out, doing a little freelance investigating. Unfortunate accidents keep happening – though the traditional poisoned chocolates couldn’t be an accident – and eventually he is found hanged. There is some attempt to make it look like suicide, but we all know it must be murder. ‘Though his shoes carry traces of damp earth and squashed fruit, the seat of the chair is perfectly clean.’

Archie is on the side of the good guys, but isn’t made to sound tremendously nice – nobody in the book seems to like anyone else, Bowers’ mood can be something of a downer. Her descriptions of people are compelling and complete – but they are very much telling you how to think of these people, and usually it’s nothing good.

There’s a ‘vain and unveracious’ witness, and you also aren’t expected to take to a woman whose flat ‘was stuffed with floppily cushioned chairs and divans disposed with an air of salacious ease.’ (I like to think of someone asking their interior designer for this effect). Various louche people hang around in kimono or dressing gown, to the obvious disapproval of the author. 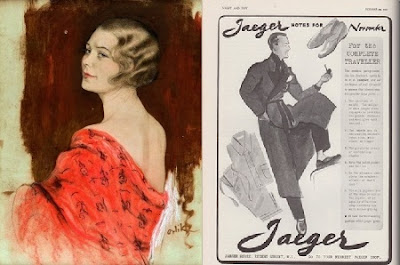 The book is very solid – workmanlike almost – but with a touch of fancy. One of the policeman says about a school that everything there is ‘done with dispatch and in their proper order’. They also talk of ‘proper sifting and bringing to order’ about some evidence. Both of these phrases would make good descriptions of the book itself.

There is an intriguing clue of bird sketches 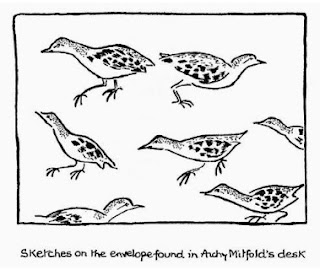 Which is genuinely puzzling and would keep you reading, although the final explanation is completely unguessable (I would say)

I don’t think I understood the role of the mentioned-but-not-visited nightclub The Pied Monkey, and I don’t really know how the title Deed Without a Name relates to the book.

But I am looking forward to establishing an overview of Bowers. See you at the British Library!

Top picture from Imperial War Museum shows exactly the kind of houses featured in one part of the book, in 1940, when some people were having to move out. (An empty house is key to the plot)

There is one more aspect to the book which I will look at in another post – fountains in books!