The Blog is Back for Stir-Up Sunday

Clothes in Books has been on hiatus while the proprietor sorted out a house move and dealt with some other projects. But now it's back! The important date of Stir Up Sunday could not be ignored... and this should be the first of more regular entries, including the usual Christmas posts. Thank you to all the lovely regular readers who checked in, looked at old posts in the absence of new, and asked me how I was. (I'm fine) 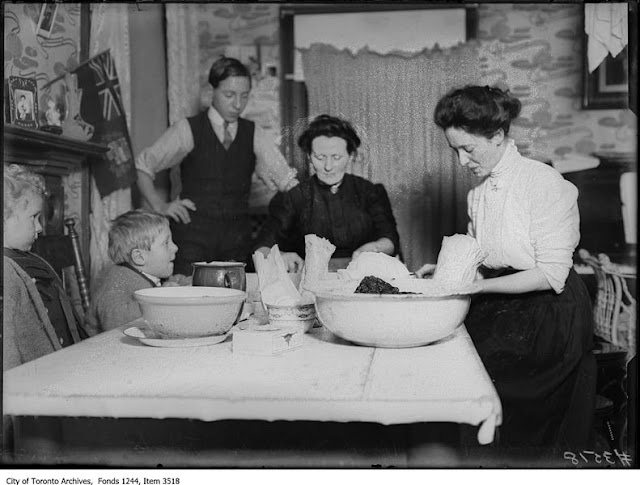 The last Sunday before Advent is Stir-up Sunday:  the Book of Common Prayer collect (prayer) for the day begins "Stir up, we beseech thee, O Lord, the wills of thy faithful people".  And people make their Christmas puddings today.

Last year I did a stir-up Sunday entry, and it provoked splendid discussions. People who listen to the Archers (UK radio serial based on a farming community) knew all about it, vicariously. There were a few people who still did it. And then Elly Griffiths (yes, I'm name-dropping, she of the Ruth Galloway books) reminded me that there is this scene in Apple Bough by Noel Streatfeild:

‘I shall need you all for a stir Monday. This one comin’ is stir-up Sunday.’

‘the stir-up collect, you mean?’

Mrs Bottle beamed. ‘That’s it. You can’t stir your pudding, not before that’s been said.’

So that next Monday evening they all went into the kitchen to stir.

The pudding mixture was not in a kitchen bowl but in an old-fashioned china washstand basin. It had pink flowers on it. Mrs Bottle said she kept it special. She had her sleeves rolled up and she was stirring a great mass of rich, dark pudding with a wooden spoon.

‘Youngest first,’ she said. ‘Take ‘old of the spoon, Ettie. Then shut your eyes and wish.’

Mr Bottle had come to watch. ‘But don’t tell nobody what you wished or you won’t get it.’

I probably wasn’t going to spend the day making pudding anyway, but her intervention ensured that I spent it re-reading this book… 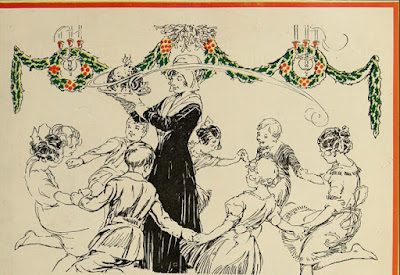 Elly G also said 'Candidates for some of the worst parents in children’s literature?’ And truly, reading this book as an adult is jaw-dropping – they really are the end. There are four Forum children, and one of them is a child prodigy at the violin, and so the whole family trails round the world while he tours and enthrals audiences everywhere. Except in the UK – child performers are not allowed there, he has to wait till he is 12. The other children get more and more restive about being parcelled up and dragged along, but say nothing because they don’t want to hurt their parents’ feelings. The parents are completely oblivious and say ‘Citizens of the world!’ and ‘Learn geography this way!’ The children plot and plan. Absolutely everything is being sacrificed to his career, but the genius boy is not happy either, is apparently not well (completely unnoticed by the parents, of course), he is making himself ill. It is all quite dramatic and

ends happily. But it is very  hard for Streatfeild to make the parents anything but negligent, narcissistic and completely selfish. (You are not meant to hate them).

There are some standard Streatfeild tropes: one of the siblings is a dancer & Madam Fidolia (from Ballet Shoes) makes an appearance. And another child is an actor and ends up in a film.

I am always fascinated by the lives of children in old books – I once wrote an article about The new Gothicism of children's books (slate.com) because it seemed children of the past had so much more freedom, and less jeopardy, than modern ones. (My article is nearly 20 years old now, but I don’t think things have changed much.) In this one they are generally quite cosseted, but for example the children (and the youngest is very young) go swimming off the Devon coast regularly, their grandfather staying at home and saying, oh I expect there are other people around who are strong swimmers and can keep an eye on you… [Somewhat like my adult reaction to Swallows & Amazons  ‘as a mother I was faintly horrified by the lack of care and safety. A running joke is that young Roger can’t actually swim, he just pretends to be able to, in order to go on the camping trip. There isn’t a lifejacket in sight as far as I can tell. The author certainly sides with the children, who finds the parents (‘natives’) very dull and liable to worry.’ Oh dear, old age.]

Throughout the book, the genius child and his violin-playing are referred to as a fiddler, fiddle-playing, a fiddle teacher, a fiddle. I thought this was the height of affectedness. Elly G says that a character in Brother of the More Famous Jack by Barbara Trapido (an all-time great book, and can't believe it has never featured on the blog) takes the excellent line that you have to earn the right to be that affected…

Top photograph is from 1910, a family in Toronto doing their pudding. William James took the photo, which is in the City of Toronto archives.

Second image is the label for a canned pudding – of course the antithesis of what Mrs Bottle is creating.

Third image is from a farmers’ magazine from 1920, an advert for flour. So old-fashioned, but then NS was always an old-fashioned writer even where, as in this book, the children wear jeans sometimes…