It’s a while since I posted here, for the excellent reason that I have been moving house, and yes of course it is  hard going, and my books are stacked away in boxes, and I can’t find anything. But the outcome will be wonderful, and I like my new house very much.

This book seemed a very suitable one in the circumstances – it is very much about making sure you feel happy in your own home….

Not at Home by Doris Langley Moore 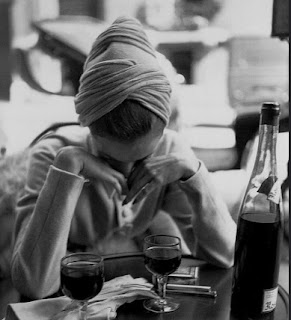 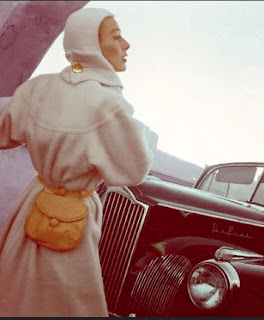 On the step was a woman laden with flowers, a wonderfully smart woman with a white cloth coat, a yellow taffeta turban draped in the newest style, and white wedge-heeled shoes as complex as a Chinese puzzle. Her hair was pale gold and her ivory-coloured face suggested rather than achieved the most extraordinary beauty.

I very much liked the first book I read by Doris Langley Moore, All Done by Kindness, so moved on to this one – as recommended by  Dame Eleanor Hull in the comments and on her own blog, of course with the mention of the white coat and yellow turban. I couldn’t get a picture of the two together, but I did like the idea. Other people have mentioned it to me too - what a compliment it is that people should read about a great outfit and think of Clothes in Books.

Not At Home has a simple concept, and if formulaic wasn’t seen as an insult you would use that word. Nice, kindly, settled Miss MacFarren has a big house in London, full of lovely things: it is just after WW2, and she takes in a highly-recommended lodger, thinking this will make life easier.

Although Miss MacFarren takes a while to realize, it is obvious to the reader that the satisfying setup must be that the superficially attractive Antonia Bankes is the lodger from hell, and is going to be extremely difficult to shift. This is a light comedy of manners (Antonia is not a murderer), and that’s more or less it, but it is a fabulously inventive and hilarious book, as the appalling Antonia – so nice! So pretty! Such lovely clothes! – finds more and more ways to be the worst tenant in the world. There is a splendid American husband, a noted war correspondent – Miss MacF says ‘I always think of Americans as either Henry James men or O Henry men’.

There is also a nephew in the film business, and the rather marvellous Maxine who hangs around with him:

Maxine was wearing a velvet bonnet trimmed with white swansdown which emphasized quite touchingly her look of dewy freshness and innocence. 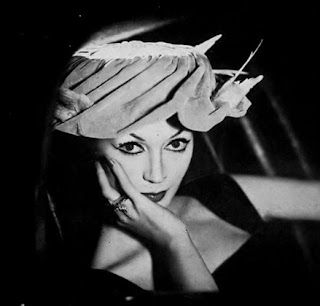 This isn’t the hat but it’ll do - and if you added swansdown this one too. 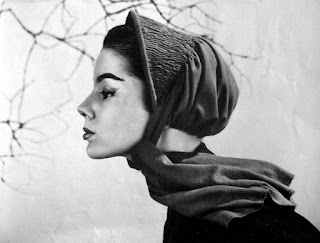 Maxine is appearing in a film based on Cranford

‘Is it Mrs. Gaskell’s Cranford?’ [Miss MacFarren asked]. ‘That’s such a favourite of mine.’

‘Then you’d better keep away from the picture,’ said Maxine.

And it is a running joke how very far from the original this film wanders:

‘I’m getting so sick of that drunken sequence from Cranford. They seem to have been cutting it for weeks.’

The film-making scenes put me in mind of similar in John Dickson Carr’s And So To Murder, Lissa Evans’ Their Finest Hour and a Half, and Vesna Goldsworthy’s Monsieur Ka.

The author, speaking through Miss MacFarran (one assumes) takes a swipe at double standards:

Miss MacF wears an amethyst velvet dress for a marvellous night out.

The sight of herself in her amethyst velvet dress, when she studied her reflection in the numerous and spacious mirrors of the ladies’ room, was extremely heartening. The alterations had been a thorough success, and her new corset, a well-justified extravagance, took inches off her waist and hips without discomfort. 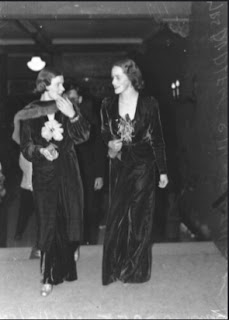 And – well – it’s not a spoiler to say that there is a long setup of the appalling Antonia’s endless misbehaviour, enjoyably horrifiying, and HOW will it be curtailed? But it is worth it for the final sorting out of everything.

And, as always, how wonderful that the Dean St Press has brought back this gem, along with all the others it finds.

The friend with an antique shop reminded me of the one in some of Sylvia Townsend Warner’s excellent short stories. There is also a very definite similarity with the works of Margery Sharp, you can imagine some of the characters in either book – a very good thing in my view.

Velvet dress: the photograph is from the state library of Queensland's collection, and is featured on Flickr.

Doris Langley Moore Not at Home