The End of Xmas - a last view of carol singers

book: The Dead Shall be Raised by George Bellairs 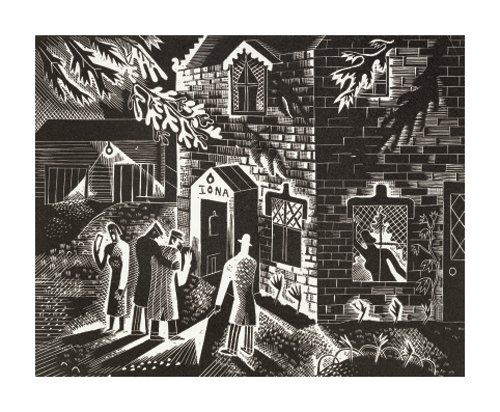 The night was still crisp and frosty, with stars bright like jewels. In spite of the black-out, there were plenty of people astir in the darkness. Sounds of merry voices, shouts of goodwill and here and there groups of boys carol-singing at the doors of dwellings and holding noisy discussions concerning the alms doled out by their patrons in between their wassailing…

They were shortly interrupted by the sound of tramping feet in the garden outside. Almost before Littlejohn had realized that an unexpected invasion had occurred, there was a great burst of music. The Hatterworth Methodist Choir was in first-class voice and loudly serenaded the Haworths, who were respected members of the congregation. It came upon the Midnight Clear, Christians Awake, and Once in Royal David’s City were reeled off in rapid succession and then the front door was flung wide and a chattering crowd of carollers surged in.

comments: This one has a very Christmas-y and atmospheric start: It is the early years of the Second World War, and  Inspector Littlejohn’s wife has been evacuated out of London. He is off by train to join her for Christmas in Yorkshire.

On Christmas Eve 1940, Detective-Inspector Littlejohn, of Scotland Yard, stepped from the well-lighted London to Manchester train into the Stygian darkness of the blacked-out platform of Stockport. Passengers and ticket collectors climbed furtively in and out of the train, anxious to keep all its light bottled-up within it. Dim forms, like the shades of the underworld, fumbled about the station.

These opening chapters are thrilling: the dark, the train rattling through England, the cold stiff arrival. Then the Inspector and his wife attend a performance of Handel’s Messiah, and the carol singers come round. It is a full rich description, and feels very real.

Then the crime plot gets under way: the Home Guard has been digging a trench up on the moors, and finds a 20 year old skeleton. This is plainly Enoch Sykes – whom everyone thought had left the area after murdering another man. So this is cold crime with a vengeance, as there are now two murders to solve (and a third one is coming). It’s a promising setup, and Bellairs certainly gives it a good go: Littlejohn trudges round the place talking to everyone who might have a memory of the events, from the lady in the big house to the nouveau riche industrialist to the plumber’s wife with a shady past she is trying to forget. At one point: ‘He entered the taproom for the beastliest interview he had ever had in his career.’ I thought that was likely to be hyperbole but it really wasn’t…

I liked that the plot concerned ordinary working people, and business practices. I didn’t like certain elements of the moral framework – Bellairs is one of those writers who can’t help letting you know what he thinks of the characters he creates. There is one character who in my view behaves appallingly, and is to blame for much of what happened: the author thinks this person is gallant, and seems to approve of many of their actions.  I didn’t think there was a cigarette paper between this person and another who was viewed very coldly indeed. (Also, sometimes these books bring out the socialist in me – why do these people think they are entitled to other people’s work and intelligence?)

But – and much more seriously when I am collecting my seasonal entries – there is no hint of Christmas joy after the opening chapters. I would say it is literally not mentioned again, apart from a view of some snow. What a lost opportunity! In addition, the book feels – to put it kindly – timeless: you get no idea for wartime economy or restrictions, most of if it could be set in the early 1900s. Every so often I was taken aback by a mention of fast cars, lorries or the telephone.

There is something called American-leather cloth mentioned twice in the book – the working-class families use it as a tablecloth so I am guessing it was some kind of wipe-clean surface. I tried looking it up, and intriguingly got lost in legal reports from the 19th century – the firm who first produced this material were anxious to preserve their rights in both the cloth and the name against depradations from other companies… Landmark court cases, still being quoted today, were the result.

The Carol Singers by Suzanne Cooper