A particular sub-species of Christmas entry for Clothes in Books: the feast of St Lucy and the Midnight of the Year

the book: All of a Winter’s Night by Phil Rickman

Off to the church and The Cloud of Unknowing. She’d left them in darkness last week but, at this time of year, the Middle Ages would have been ready to light solstice lamps. St Lucy’s Night was a festival of light, celebrated these days more in Scandinavian countries – Denmark, Sweden, with their long, long winters. In the third century, Lucy had brought food to Christians hiding in the catacombs, wearing a wreath of candles around her head to light her way, leaving her arms free to carry more goodies. Reminded Merrily, slightly uncomfortably, of the crown of lights worn by women in certain witchcraft ceremonies.

comments: It seems impossible, but is apparently true, that I have never before covered a Phil Rickman book on the blog, although one of the books was mentioned in this blogpost on boy bishops. I LOVE his Merrily Watkins series, and I think the reason for the blog neglect must be that they are true relaxation reads for me, and I don’t want to take notes and look for pictures. (Even though they are very visual books, AND he is good on clothes.)

But I also love a mention of St Lucy’s Day – see this 2016 post about the near-miraculous John Donne poem on the subject: sad and opaque and yet speaking to us across the centuries.

And this book is very firmly set in dark December days, with some pretty dark goings on in Merrily’s rural area in Herefordshire. She is a local vicar, but also the Deliverance expert, which means she looks into inexplicable supernatural happenings and satanic sightings. The plot is – as in all the books – a mixture of very modern life, and local history, and some very violent crimes, and a long hard look at the possibility of there being more to life than what you can see and feel and prove for yourself.

The books are an absolute treat, and I don’t know why they are not better-known.

They are set on the border between Wales and England, and the border, and differences between the two nations, feature a lot. My Christmas Day poem last year was by RS Thomas, a Welsh clergyman and poet, and blogfriend Roger Allen recommended a biography of him – on the bizarrely unlikely grounds that it was hilariously funny. This seemed so odd (Thomas was famously grim and grumpy) that I had to read the book – The Man Who Went into the West by Byron Rogers – and it is an exemplary biography and is indeed hilarious. Or, as a former Archbishop of Canterbury described it, ‘riotously funny’. And the descriptions of places and people did remind me of Phil Rickman’s books – you could just imagine RS Thomas popping up to harass Merrily and forbid her from entering his church (which his wife might well have painted black inside.) Highly recommended.

All of a Winter’s Night also features morris dancing. I once wrote a blogpost called Morris Dancers Just ARE funny, but not in this book they’re not: they are weird and terrifying and deadly serious.

There is also a form of Green Man

(This Green Man picture is by Lauren Raine and is from Wikimedia Commons.) 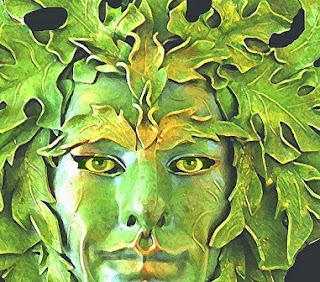 This entry (by the guest blogger Colm Redmond) is about a book featuring such folk customs, and well worth a read.

Gladys Mitchell always likes folk customs, and Ngaio Marsh went there in Off With His Head (Death of a Fool) – also set around the Winter Solstice. All these posts have fascinating pictures of dancers and mummers.

Now, St Lucy’s Day – I found a very helpful official Swedish cultural site, and they explained about the annual candlelit Lucia procession on 13 December, with girls and boys clad in white full-length gowns singing songs together - I will quote it at length: 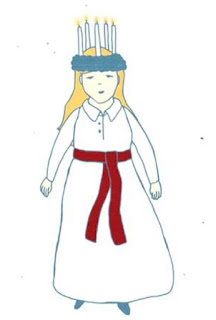 White gown, stars and candles: The real candles once used are now often battery-powered, but there is still a special atmosphere when the lights are dimmed and the sound of the children singing grows as they enter from an adjacent room.
Tradition has it that Lucia is to wear ‘light in her hair’, which in practice means a crown of electric candles in a wreath on her head. Each of her handmaidens carries a candle, too.

The Lucia celebrations represent one of the foremost cultural traditions in Sweden, with their clear reference to life in the peasant communities of old: darkness and light, cold and warmth. Lucia is an ancient mythical figure with an abiding role as a bearer of light in the dark Swedish winters.

The many Lucia songs all have the same theme:
The night treads heavily
around yards and dwellings
In places unreached by sun,
the shadows brood
Into our dark house she comes,
bearing lighted candles,
Saint Lucia, Saint Lucia.

All Swedes know the standard Lucia song by heart, and everyone can sing it, in or out of tune. On the morning of Lucia Day, the radio plays some rather more expert renderings, by school choirs or the like. The Lucia celebrations also include ginger snaps and sweet, saffron-flavoured buns (lussekatter) shaped like curled-up cats and with raisin eyes. You eat them with Swedish mulled wine (glögg) or coffee.

Doesn’t that all sound nice?

(sadly, the website I found these on seems to have disappeared, so I cannot give the links)

The drawing is from the Swedish culture site.