The Importance of Christmas Presents 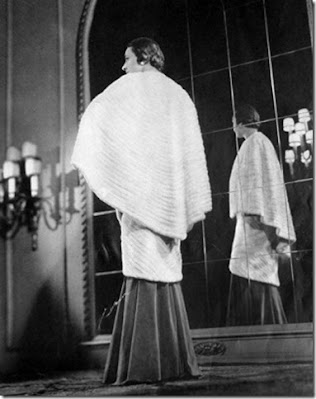 I can find almost no references to author or book anywhere [but see end of post! **], but this is a neat little book which would fit in well with some programme for reprinting from the Golden Age. It was published in 1940 but set a few years earlier.

It would definitely remind you of some other books, particularly Anthony Berkeley/Francis Iles – it is a kind of inverted mystery, though not in the most straightforward way.

There are five ‘movements’, the first three narrated by different characters. Emma is a devoted nanny – her first charge, Eloise, is now grown up, and Emma now looks after Eloise’s child. Emma very much dislikes Eloise’s husband, Richard, whom she sees as a fortune-hunting, uncaring cad. And there is another character floating in the background, Eloise’s cousin Antonia – much more lively and fun, but without the riches that Eloise has.

It's very clear that someone is up to no good, no surprises there, but the actual playing out of the plot is full of small surprises, and very satisfying (with one slight reservation about the final twist – nicely prepared up to a point, but to me there was something missing.)

The wicked Richard is great fun:

I had always had a suspicion that my brain was above the average, and God knows I had never worn it out with a lot of study, or worry, or speculation or philosophy... I had left it pretty fallow.

And disarmingly honest about his feelings and thoughts and plans.

And even the nanny, Emma has her moments – here she is talking to a grave-digger, who says:

‘A pleasant lady… One of the nicest people. Them’s the sort that allus goes first, in my reckoning.’

The remark showed his own low opinion of his own brightness and pleasantness, for he was every day of eighty.

And she meets a lawyer who ‘would have made a Red Russian respectful.’ 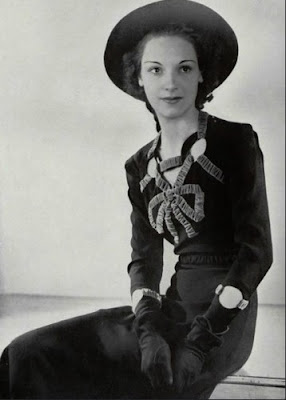 It’s a nicely balanced story, using some well-worn tropes but keeping you guessing. And Richard and Antonia are completely amoral, but then Eloise is very annoying indeed. You can’t help empathizing with Richard when he says that if she was poor and had to work for a living ‘her neurosis would have been kept within bounds and probably disappeared.’ (Something like the main character in the Agatha Christie short story The Case of the Rich Woman – Parker Pyne at his most intriguing, and a blogpost I really enjoyed writing and picking a picture for.)

The climax of the book comes at Christmas – some well-described presents, an important scarf, and a happy family life glimpsed through the window. (See picture – no it won’t be) Antonia tries to do something nice for once, and it leads to their undoing. 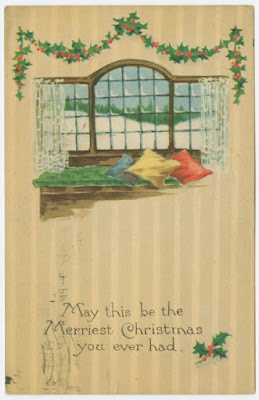 There are some good clothes- including nanny knitting an angora bedjacket for Miss Eloise, always a CiB favourite ‘palest shell pink brushed up around the neck and the edges of the little sleeves until it looked almost as though it was edged with swansdown.’ [See also – Ngaio Marsh False Scent] She also makes doll clothes for the child, and Antonia looks at the outfit and says ‘Obviously Nanny has never heard of step-ins!’ Step-ins equally a subject of some interest on the blog. 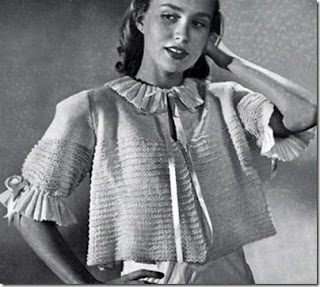 And there is a beautiful pink evening cape, and a grey suit with a trim of caracul (alt. Karakul, Persian lamb) – either Peter Curtis was unusually knowledgeable about women’s clothes, or he got some help with this aspect. I have chosen a couple of outfits that seemed to me to suit – Antonia in the day dress, the long dress for Eloise. 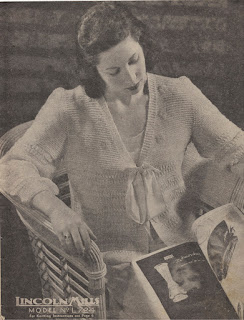 *** After I’d written this post I looked to see if anyone else had reviewed it – and of course Kate at Cross-Examining Crime had! And, she solved a mystery for me, all became clear. When I had tried to google it, I kept getting another book of the same name, written by Norah Lofts, blocking any possible references to this one. Tchah, I said. Only, as Kate reveals, Norah Lofts IS Peter Curtis – she was a very prolific writer and used some pseudonyms. So I felt satisfied that I had recognized that it had a woman’s touch. Less satisfied that I had read and commented on Kate’s post, but had obviously forgotten all about that…

The cape picture – from 1930s Vogue – comes from the Clover Vintage Tumblr.