I am re-visting an old Christmas entry today, but really just as an excuse to run this picture, one of my all-time blog favourites: a picture of Christmas in Wales in the 1950s 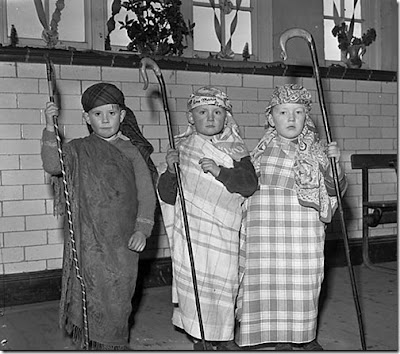 OK Scrooges and Grinches - you can try to resist that picture, but you won't succeed. Just look at their serious faces, and their entirely authentic costumes made of curtains, tablecloths and tea towels. The crooks may well actually be the real thing, as the photo was taken in a very small Welsh farming village, home no doubt of both sheep and shepherds.

This is one of the rare reverse entries – where the picture came first and I looked for a book to match it – and it also raised a question and answered it.

When I found this fabulous picture of the shepherds, I thought it would be easy enough to find a Nativity Play to match. Miss Read wrote a long series of books about a village school in Oxfordshire, many of them following the seasons of the year – surely I’d be spoilt for choice?

But no, there were plenty of Christmas chapters and parties and shows and concerts, but no Nativity Play. And then I found this one, and it explained its own rarity – no village tradition, very interesting I thought. Also, no mention of the idea of having one at school, which would have been quite commonplace both then and now.

My in-laws lived in a similar small village (about halfway between the supposed setting of Fairacre, and the Welsh village from the photo), and the church there used to have the most lovely children’s nativity service, with a real donkey to carry in Mary. And they made my children (incomers, passing visitors, unknowns, very young) spectacularly welcome – ‘get them to grab an angel costume and join in, the big children will keep an eye on them’. A treasured memory.

Along with a different, very informal, Nativity, where my 3 yo son changed his mind about his role half-way through, and ended up wearing a cow costume with a king’s robe and crown added on top, gift for the baby in his arms (hooves? paws?) – a never-to-be-forgotten sight. And my daughter, aged 5, playing Mary – she did well, so far as I could tell through my veil of tears.  And the time I had the job of looking after the naughty shepherds at the back of church, getting them to the stable on time and channelling my Christmas goodwill (‘Stop climbing! Get out of the Baptism font! Leave those foodbank contributions alone!’).

Whatever your views on religion, the children’s Nativity is a wonderful custom.

The picture is of a school event in Llangedwyn in 1956, from the National Library of Wales.

Miss Read books have featured a few times on the blog.

This is the book excerpt I originally used, from Miss Read’s Storm in the Village, published 1958:

The Nativity Play, which took place in St Patrick’s church three days before Christmas, had occasioned [endless] comment. This was the first time such a thing had been attempted and the innocent vicar, whose only thought had been of his parishioners’ pleasure in praising God in this way, would have been flabbergasted could he have heard some of the criticisms.

‘Nothing short of popery!’ was Mr Willet’s dictum. ‘Play acting in a church! I don’t hold with it!’…

The children had been practising their part in it for several years, and I knew that Mr Annett as choirmaster had been busy with the singing which was to form part of the play. Several parents had spoken to me, rather as Mr Willet had, expressing their grave concern about what one called ‘doing recitations in the Lord’s House.’ The singing passed without comment.

But on the evening in question Fairacre’s villagers turned up in full force and it was good to see the church packed. A low stage had been erected at the chancel steps and the setting was the stable at Bethlehem…

The play was simple and moving, the country people speaking their parts with warm sincerity, but it was the unaccustomed beauty of the boys’ singing that was unforgettable… their clear oval notes echoed in the high vaulting ceiling, with thrilling beauty. Whatever may have been said about such goings-on in church before the play, everyone agreed, as they stopped to talk afterwards in the windy churchyard, that it was a moving experience.