The Only Problem by Muriel Spark 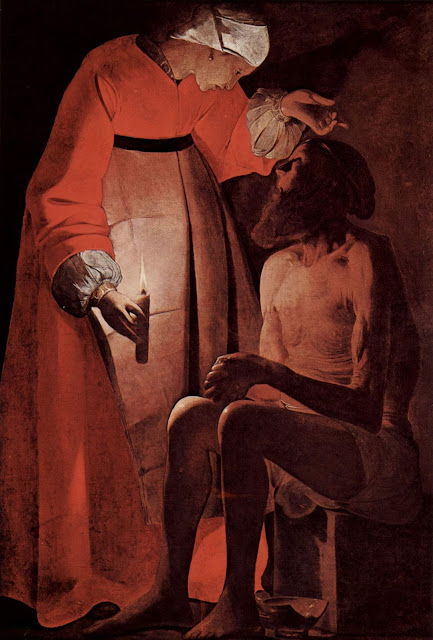 He had come to look once more, as he had often done before, at the sublime painting Job Visited by his Wife, at the Musee of Epinal.

He was well-known to the receptionist who gave him a sunny greeting as he passed the desk.

The painting was made in the first part of the 17th century by Georges de la Tour, a native of Lorraine. It bears a resemblance to the Dutch candlelight pictures of the time. Its colours and organization are superb. It is extremely simple, and like so much great art of the past, surprisingly modern.

Job’s wife, tall, sweet-faced, with the intimation of a beautiful body inside the large tent-like case of her firm clothes, bending, long-necked, solicitous over Job. In her hand is a lighted candle. It is night, it is winter, Job’s wife wears a glorious red tunic over her dress….

[Job’s] face looks up at his wife, sensitive, imploring some favour, urging some cause. What is his wife trying to tell him as she bends her sweet face towards him? What does he beg, this stricken man, so serene in his faith, so accomplished in argument?

The scene here seemed to Harvey so altogether different from that suggested by the text of Job, and yet so deliberately and intelligently contemplated that it was impossible not to wonder what the artist actually meant.

comment: It’s a real painting, in exactly that Museum, and that’s it above. Muriel Spark’s novel comes between the 1981 Loitering with Intent and A Far Cry From Kensington from 1988 – in my view two of her best. I’m not so sure about this one, though the Job connection is fascinating. Protagonist Harvey is writing a scholarly book about Job: meanwhile all kinds of things are going on in his private life involving his wife, her sister, potential terrorists, an old friend, and some children.

There are rather heavy-handed parallels with the story of Job, and some nightmarish encounters with police and authorities, and a discomfiting lack of clarity about what exactly is going on. It is – and this is always a good point about Spark – short, easy to read, and compelling.

When the book was written, the casual reader would most likely have no idea what the picture would look like, and it would have been quite hard to find any reproduction. Now, it would take you a few seconds on a computer to find it.

Georges de la Tour is a very distinctive artist who has only in recent years become well-known at all.  (In Evelyn Waugh’s letters you can see him discovering him, in particular - and not unexpectedly - Magdalene with the Smoking Flame). It is well worth a look at some of them, they are compelling and memorable. When I was young we had a family Bible which was illustrated by pictures from the the Old Masters, and the de la Tours were the ones I stared and stared at.

The story of Job is a good match for the slightly mysterious and candlelit artist. If you just vaguely know the story it is a revelation to actually read the book from the Bible: it is a work of enormous strength and beauty, one that stays in the mind in the way the paintings do.

My favourite line (in the Biblical book) is where Job says that his ‘days skim by like a boat made of papyrus’: I find it a very soothing way to think about it (although tbh the context suggests it is not intended that way).

This picture is also knowns as Job Mocked by his Wife – very much what she does in the Bible story. So it is interesting to stare and stare at this image and make up your own mind as to whether she is ‘visiting’ or ‘mocking’.

Many other Muriel Spark books on the blog.