Stir Up Sunday: Making the Pudding

book: The Piper in the Wind by Anne Hepple 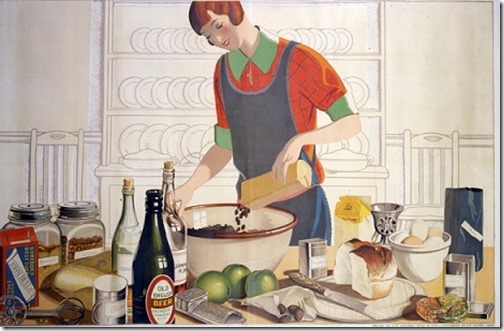 [Hagar, the new housekeeper, is making plans for Christmas with the Peregrine children]

They started on [making] the plum-pudding and mincemeat.

Everybody joined in, and … Penny announced that she was going to [fetch everyone] to come and stir the pudding and wish a wish.

Hagar was soon in her element. She loved cooking, especially cooking on a large scale and for a party. In a twinkling she had donned a big cooking apron, and from her store had arrayed her assistants in white aprons.

So it was a merry party of cooks and chefs that stoned raisins and chopped apples and peeled almonds and sliced up lemon peel and citron.

Hagar presided over the two large clay dishes at the end of the table, in one of which were the contents for the pudding and the other the mincemeat…

After continual questions about weighing out the ingredients for the pudding and mincemeat, the stirring stage was arrived at, and Penny flew off to bring in Anthony Truett and Miss Jenkins, Barty Lough and various other assistants from the shop to stir the pudding and wish a wish. Even [their father] Mr Peregrine had to come, and entertained them all by telling a gruesome story about three wishes that were fulfilled which produced such delicious thrills of horror in Penny and Perry that he had to promise to tell them ghost stories on Christmas Eve.

comments: Today is the last Sunday before Advent, and traditionally this was Stir Up Sunday: the day you made your Christmas pudding. Everyone takes a turn to stir, and makes a wish. And the first church reading for the day in the Book of Common Prayer starts "Stir up, we beseech thee, O Lord, the wills of thy faithful people".

So here an early Xmas(ish) entry with this scene from The Piper in the Wind - a much-loved romance/family saga set in the Borders area of Scotland.

Earlier this year I wrote a post about my love for a certain kind of book – bestsellers of (roughly) the first half of the 20th century, some of which could be described as high-grade tosh. It turned out plenty of people shared my love for these books, and the post was much liked, commented on and shared. Part of the pleasure of that is that readers will add their own suggestions, and that is where this book comes from. My good friend Hilary McKay recommended it, and I will always read anything she suggests. I did a post on it for Valentine’s this year, soon after she had first mentioned it.

She said then: ‘I agree that it really is first class tosh. (Not to mention the age-old question of why perfectly charming fathers marry wicked step mothers anyway.) I liked it for the old-fashioned atmosphere, and because those Peregrines have such very nice things. Tower rooms and lovely china and orange silk dresses and parrots and walled gardens with Christmas roses. And co-incidences and casual poisonings.’

What could be more tempting? That’s a great description of the book, and also points up something about it: a resemblance to the works of Elizabeth Goudge - many posts on the blog, and very popular amongst my regular readers.

You can read more about the book in my earlier post, but this is part of what I said:

“It starts with Hagar, a young woman left alone in the world, who goes as housekeeper to a large family. All kinds of difficulties and dramas hit the Peregrines, but they are all given more or less equal weight – doomed romances jostle with difficulties at school. Quite light problems will suddenly take a turn for the worse and vice versa. Hepple seemed to have a clear idea of what she wanted her characters to do, and how she wanted to write about it, and she wrenched them round without the slightest attention to likelihood or a convincing scenario.”

Hepple also seemed to get lost in her timings and the order of events – some people were coming to tea at the beginning of the book, then were introduced as strangers to Hagar much later. I mean, they were going to be making cakes for them in the scene above: who ate the cakes?

One of my other ‘tosh’ books led to a discussion of the plot device of someone going blind (from Jane Eyre onwards) and it turns up here in full force. Two characters here go off on an adventure which is, to say the least, unlikely and ridiculous, we get glimpses of increasingly bizarre events in their life before they calmly return, and suddenly everything is all right again. The list of events in the book ranges from guns and shootings to a girl who expected to have midnight feasts at boarding school and doesn’t (she is very upset). People get sudden sharp illnesses and nearly die, but perhaps that was the case in those Olden Days.

There is quite a fascinating fight in the book within a farming family between those who want to introduce intensive farming methods, and those who want to keep a proper old-fashioned farm: the arguments sound surprisingly modern.

And the book really is a good read of a certain kind, with well-rounded (and occasionally annoying) characters – the labrynthine different themes certainly make for compelling pages.

The wonderful picture is Making the Xmas Pudding from the UK National Archives.